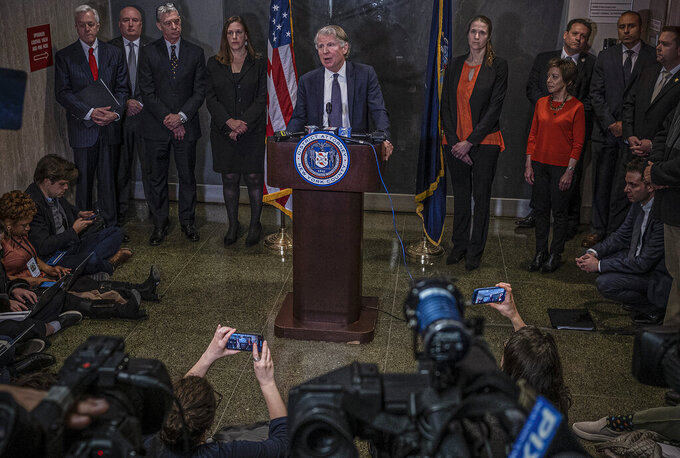 FILE - In this Monday Feb. 24, 2020 file photo, Manhattan District Attorney Cyrus Vance Jr., speaks after a verdict in the Harvey Weinstein rape trial in New York. On June 22, 2021, Democrats will be voting in a party primary for Manhattan’s next district attorney. (AP Photo/Craig Ruttle, File)

NEW YORK (AP) — Eight days after Donald Trump turns 75 next month, New York City voters will cast their last ballots in an election that's sure to have consequences for the former president.

It’s not another White House run, but a vote in the Democratic Party primary for Manhattan’s next district attorney — the person who would likely end up handling prosecution if an ongoing investigation of Trump's business finds criminal wrongdoing.

The current district attorney, Cyrus Vance Jr., is leaving office at the end of the year, meaning there's a good chance he'll pass the two-year probe to his successor.

The matter of who will take over has taken on new urgency after the announcement this week that the state attorney general’s office had joined the DA's Trump criminal investigation — a sweeping look at hush-money payments, property valuations, tax strategies, executive compensation and other dealings.

In a solidly Democratic borough, the party’s June 22 primary is highly likely to decide the winner.

The eight candidates have made clear they're not afraid of taking on the former president, but most have been cautious to stay away from overtly anti-Trump rhetoric.

“While I can’t say what I will specifically do without seeing all the facts and the evidence, if Donald Trump or any of the Trumps committed crimes in Manhattan, I will prosecute them,” said candidate Eliza Orlins, a public defender who once appeared as a contestant on “Survivor.”

No obvious frontrunner has emerged in the crowded field.

The Trump investigation, which the former president has decried as a “witch hunt,” carries major implications for his political future and the fate of his company.

Trump isn't the only topic of discussion in the race, amid reignited concern over street crime and the ongoing debate about criminal justice and the role of prosecutors, renewed in the wake of the Minneapolis police killing of George Floyd a year ago.

“At the beginning of the race, maybe last year, a lot of folks thought that Trump would be a primary talking point, but he doesn’t really seem to be the main issue in this crop of candidates,” said Christina Greer, political science professor at Fordham University. “He’s in a long list of issues, but crime and how the DA will prosecute particular cases seem to be the more prescient issues.”

The city has seen more than 155 homicides since the start of the year, the highest number for that period since 2011. Other major crime categories, including robberies, burglaries and felonious assaults, remain largely where they were before the coronavirus pandemic.

The race could decide whether the next district attorney will continue criminal justice reforms, which in recent years have included scaling back drug prosecutions and locking up fewer defendants for long periods while they await trial.

Crotty has racked up endorsements from law enforcement unions, who see her as the candidate most focused on public safety. Other candidates have garnered support from reform-minded activists and organizations.

Vance’s office said he will continue to lead the Trump investigation through the end of his term.

He has hired former mafia prosecutor Mark Pomerantz to assist in the probe and, in February, obtained eight years of Trump’s tax returns, ending a lengthy legal fight.

Vance’s former chief assistant district attorney Daniel R. Alonso, who is not a candidate, said it’s vital that the Trump case is left “in the hands of somebody who knows what they’re doing, who’s competent, who’s experienced, who has judgment and who doesn’t think politically.”

“Frankly I don’t think the voters are focusing enough on this issue,” said Alonso.

The candidates have, at the very least, sought to telegraph that they won't go easy on the powerful.

Orlins knocked Vance for declining to bring charges against Trump's two eldest children, Ivanka and Donald Jr., in 2012 after investigating allegations they defrauded clients in a Manhattan condominium project. Vance concluded there was insufficient evidence of a crime.

“I think that we might not be in this situation that we’re in — we might never have had a President Donald J. Trump — if Cy Vance had done this earlier, if he had brought those cases and not declined to prosecute,” Orlins told The Associated Press.

Vance's decision in the earlier Trump investigation was one of several cases in his 12-year tenure where critics say he caved to powerful interests.

Vance was criticized for dropping rape charges against French financier Dominique Strauss-Kahn in 2011, declining a chance to prosecute Harvey Weinstein in 2015, five years before his eventual conviction, and striking a deal in 2016 with a well-connected gynecologist to avoid prison for allegedly sexually abusing patients.

Bragg said he would do away with what he deemed the office's “two systems of justice.”

Aboushi said she’ll “never put a badge or bank account above the law.”

Crotty said: “It comes down to what are the facts of your case, and it doesn’t matter how powerful the person is, it’s how powerful your facts are."

“I’m not intimidated by anyone,” Farhadian Weinstein said in an interview. “We are all equal under the law and that doesn’t change if you go on to occupy a position of power including the power of the presidency.”

Quart said: “If there is evidence a serious crime has been committed, I would certainly prosecute, and that would be true for the president as much as it’s true for anyone else.”