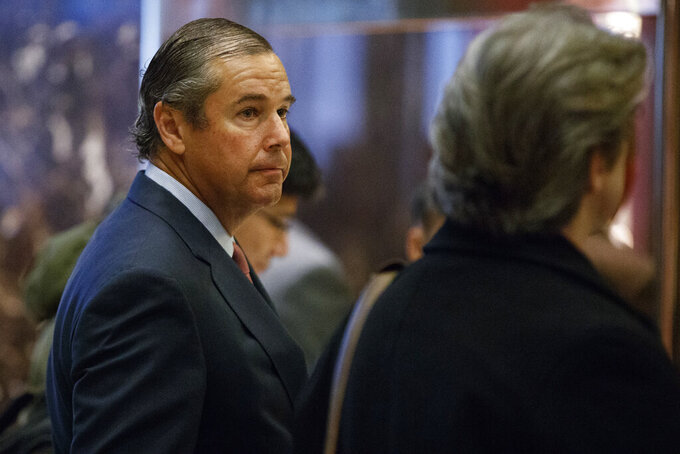 FILE - In this Nov. 30, 2016, file photo, investor Ray Washburne waits for an elevator in the lobby of Trump Tower in New York. As much as $273 million in federal coronavirus aid was awarded to more than 100 companies that are owned or operated by major donors to President Donald Trump's election efforts, according to an Associated Press analysis of federal data that was released Monday, July 6, 2020. Irving, Texas-based M Crowd Restaurant Group, which owns 27 Texas restaurants including the Mi Cocina chain, was approved for between $5 million and $10 million. Washburne, one of the company’s founders, was vice chairman of the Trump Victory Committee in 2016 and donated $100,000 to the PAC last August. The company did not respond to a request for comment. (AP Photo/Evan Vucci, File)

WASHINGTON (AP) — As much as $273 million in federal coronavirus aid was awarded to more than 100 companies that are owned or operated by major donors to President Donald Trump's election efforts, according to an Associated Press analysis of federal data.

Many were among the first to be approved for a loan in early April, when the administration was struggling to launch the lending program. And only eight businesses had to wait until early May before securing the aid, according to the AP’s review of data released Monday.

The Trump-connected companies obtained the aid through the Paycheck Protection Program, which extends a lifeline to small businesses struggling to navigate the pandemic. Fast-food chains like Muy Brands, oil and gas companies and white-collar firms were all granted a slice of more than $659 billion in low-interest business loans that will be forgiven if the money is used on payroll, rent and similar expenses.

All told, the Trump supporters who run these companies have contributed at least $11.1 million since May 2015 to Trump’s campaign committees, the Republican National Committee and America First Action, a super PAC that has been endorsed by Trump, the AP review found. Each donor gave at least $20,000.

There is no evidence the companies received favorable treatment as a result of their ties to Trump, and the businesses account for just a fraction of the overall spending under the program.

But the distribution of relief money is coming under heightened scrutiny after the Trump administration initially refused to reveal which companies received loans, only to cave under growing bipartisan pressure from Congress. On Monday, the Treasury Department released the names of companies that received loans that were greater than $150,000, though they didn't release specific dollar figures and instead gave ranges for the dollar value of the aid.

Among the recipients named Monday was the conservative website NewsMax, which was approved for a loan up to $5 million on April 13, the data shows. NewsMax CEO Christopher Ruddy has donated $525,000 to political committees supporting Trump, records show. He did not respond to a request for comment.

Muy Brands, a San Antonio, Texas-based company that operates Taco Bell, Pizza Hut and Wendy’s franchises, was approved for a loan worth between $5 million and $10 million. Its owner, James Bodenstedt, has donated $672,570 to Trump since 2016, records show. The company did not respond to a request for comment.

Irving, Texas-based M Crowd Restaurant Group, which owns 27 Texas restaurants including the Mi Cocina chain, was approved for between $5 million and $10 million. Ray Washburne, one of the company’s founders, was vice chairman of the Trump Victory Committee in 2016 and donated $100,000 to the PAC last August. The company did not respond to a request for comment.

“The PPP was a huge success and saved 51 million American jobs, including at Joe Biden’s old law firm and many companies associated with Obama Administration alums," said Trump campaign spokeswoman Samantha Zager. "When the rent or mortgage was due, tens of millions of Americans kept receiving paychecks thanks to President Trump’s leadership.”

Government watchdog groups say they have little faith in the administration conducting oversight of the program, noting Trump has ousted numerous inspectors general and has broadly resisted efforts to add transparency.

“When you don’t have proper safeguards, such as timely disclosure and effective inspectors general, then all these things look more suspicious and raise more questions,” said Larry Noble, a former general counsel at the Federal Election Commission. “When you see these people getting assistance quickly and they have contributed to the campaign, then it is going to raise questions."

Companies typically must have fewer than 500 workers to qualify for the Paycheck Protection Program. About $130 billion was unclaimed as the application deadline closed June 30.

With money still available, Congress voted to extend the program just as it was expiring, setting a new date of Aug. 8.

The public may never know the identity of more than 80% of the nearly 5 million beneficiaries to date because the administration has refused to release details on loans under $150,000 — the vast majority of borrowers.

That secrecy spurred an open-records lawsuit by a group of news organizations, including the AP.

And Trump donors aren't the only people with ties to the president who have benefited.

The Joseph Kushner Hebrew Academy in New Jersey, which is named after Trump’s son-in-law and adviser Jared Kushner’s grandfather, was approved for a loan in the range of $1 million to $2 million on April 5. Jared Kushner’s parents’ family foundation supports the school, NBC News reported.

Kasowitz Benson Torres, the law firm founded by Trump's longtime personal attorney Marc Kasowitz, was approved for a loan worth between $5 million and $10 million.

Transportation Secretary Elaine Chao’s family’s business, Foremost Maritime Co., was cleared for a loan valued between $350,000 and $1 million. She is married to the Senate majority leader, Mitch McConnell, R-Ky.

The money was used to cover the payroll and expenses of 13 employees.