Trump envoy traveled to Syria for talks on missing Americans 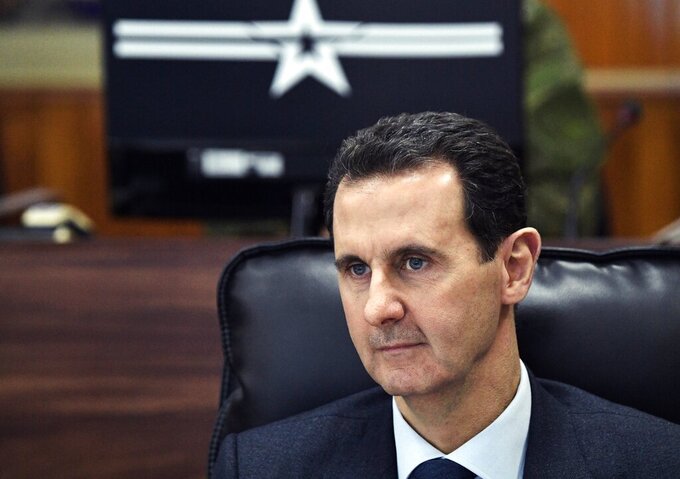 WASHINGTON (AP) — A senior White House official made an unusual, secret visit to Syria for high-level talks aimed at securing the release of two Americans who have been missing for years amid the country's long civil war, Trump administration officials said Monday.

Kash Patel, a deputy assistant to President Donald Trump, went to Syria as part of an administration effort to secure the release of Americans overseas, including missing journalist Austin Tice, the officials said on condition of anonymity.

The trip, the first high-level visit by an American official to Syria in years, was first reported Sunday by The Wall Street Journal. Two administration officials confirmed it to The Associated Press on condition of anonymity to discuss sensitive negotiations.

Gaining the release of Tice, a journalist from Texas who disappeared while covering the civil war in 2012, would be a significant foreign policy victory for Trump, whose administration has touted its record of freeing Americans held overseas as well as an unconventional approach to Middle East politics.

Direct talks had also been sought by the missing journalist's parents, Marc and Debra Tice.

“For years we have pushed for engagement between the U.S. and Syrian governments to help bring our son safely home, so we hope recent reports are accurate," they said in a statement. "We are deeply grateful to everyone working for Austin's safe return, and his continued absence shows there is more to be done."

Tice, a former Marine and native of Houston, Texas, vanished in August 2012 in the Damascus suburb of Daraya as he was about to make a trip to Lebanon and was detained at a checkpoint. He had been working as a freelance journalist for CBS News and other outlets.

The Syrian government has not publicly acknowledged knowing anything about his whereabouts.

The other missing man is Majd Kamalmaz, a 62-year-old clinical psychologist from Virginia, who disappeared in 2017 and is believed to be held in a Syrian government prison.

His daughter, Maryam, said the family learned of Patel’s visit last week. “Praying for the best from it,” she said, speaking to The AP in a series of messages.

The family believes the trip occurred within the past two weeks but she had no further details.

There has not been a confirmed visit by a high-level American official to Damascus since the U.S. shuttered its embassy in the capital and withdrew its ambassador in 2012 as the country’s civil war worsened.

However, numerous U.S. officials, both military and civilian, have traveled to rebel-held parts of the country in the years since.

The visit would be seen as a boost by the internationally isolated government of President Bashar Assad, which faces U.S. and European sanctions for its role in the war. In recent months, as the fighting subsides, a number of Arab countries that had boycotted Assad have begun reopening their embassies in Damascus.

A pro-Syrian government newspaper Al-Watan also confirmed the Journal’s report, adding that Patel and Roger Carstens, special presidential envoy for hostages affairs, were in Damascus in August, where they met with the Syrian intelligence chief to discuss the Americans.

The paper, which usually conveys government positions, said Syrian officials have demanded a U.S. troop withdrawal from eastern Syria, where they have been deployed alongside Kurdish fighters. Damascus considers the U.S. troop presence there illegal and is at odds with the Kurdish group seeking autonomy. The paper also said it was the third such secret visit by senior U.S. officials in past years.

Trump has made negotiating the release of U.S. citizens held hostage or imprisoned in foreign countries a priority.

A top Lebanese intelligence official has been in Washington since last week. Maj. Gen. Abbas Ibrahim has negotiated the release of a U.S. citizen from Syria and a Lebanese man who is also a permanent U.S. resident from Iran.

Abbas's departure from Washington was delayed, and a planned trip to Paris canceled, because he contracted COVID-19, according to Lebanon’s General Security Directorate.

Former national security adviser John Bolton wrote in his recent book that negotiations on the U.S. role in Syria were “complicated by Trump’s constant desire to call Assad on U.S. hostages." He said he and Secretary of State Mike Pompeo thought it was "undesirable.”

“Fortunately, Syria saved Trump from himself, refusing even to talk to Pompeo about them,” Bolton wrote.

Kamalmaz's daughter, Maryam, said the family still has no news about her father's health or whereabouts. “We are hoping this meeting will bring some updates and news about him.”

Tens of thousands of people are believed held in Syrian prisons since the country's civil war broke out in 2011. Many are held incognito for years in lock-ups rife with torture and disease. In the country's war, militant groups have also resorted to kidnapping foreigners for ransom or rivals to settle scores.