As Trump faces uncertain future, so do his signature rallies 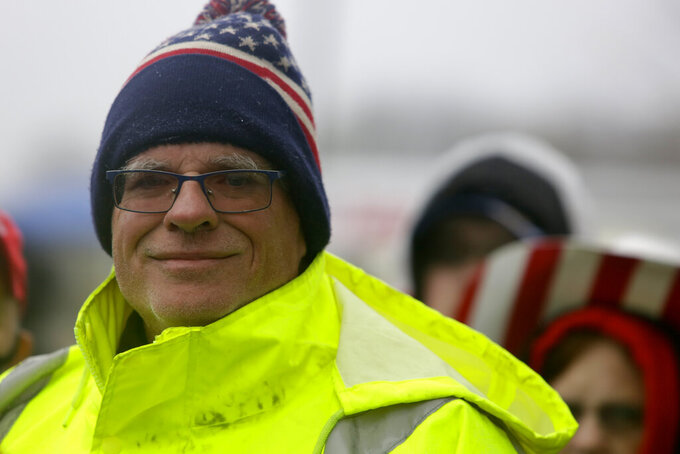 LITITZ, Pennsylvania (AP) — They began to arrive more than 40 hours before President Donald Trump took the stage in this stretch of rural Pennsylvania where horse-drawn buggies remain a common sight. By 10 p.m., a small group had set up an overnight camp on lawn chairs as a cold drizzle set in.

“I am the crazy Trumper,” declared Kyle Terry, 33. He had been the first to arrive at the IMAX parking lot — at 8 p.m. Saturday for a Monday afternoon rally, his fifth of the fall. “I love it. I’ve been having the most fun of my life. And I really just don’t want this to stop."

As President Donald Trump faces an uncertain future, so too does a fixture of the American political scene over the last five years: the Trump campaign rally, a phenomenon that has spawned friendships, businesses and a way of life for Trump’s most dedicated supporters. His fans have traveled the country to be part of what they describe as a movement that could outlive his time in office.

Some have attended so many rallies they've lost count, road-tripping from arena to arena like rock groupies. They come for the energy, the validation of being surrounded by like-minded people, the feeling of being part of something bigger than themselves. Sociologists and historians see elements of a religious following.

They are people like Cynthia Reidler, 55, who has been a Trump supporter since he announced his candidacy. She has been to nearly 20 Trump events, from rallies to Fourth of July celebrations on the National Mall.

“The feeling — like it just grabs you," she said as she waited near the front of the line Monday morning, dressed in a red poncho and headband with tinsel and lights that no longer lit up because of the rain. “I always say it’s better than a rock concert. And it’s free.”

Reidler, who lives in Pine Grove, Pennsylvania, arrived at Lancaster Airport around 2:30 p.m. the day before the rally and camped out overnight so she could snag her favorite spot up front. The waiting game, for her, is part of the fun.

“It’s just a whole lot of excitement that I don’t think you can explain. It brings back a time when our country was just so happy and so positive," she said, comparing the feeling to the time she marched in a bicentennial parade as a Girl Scout when she was 11.

And what of the threat from the coronavirus pandemic?

“I know the statistics. It is a risk,” said Reidler, who works in health care. But "the thought of not having him as a president is more of a fear to me than the alternative."

Tears welled in her eyes as she entertained the prospect.

It was a similar story for Terry, the first-in-line Trump fan from northeast Philadelphia. He had never been into politics until this year, when he registered to vote for the first time. Now he's fully committed: He spent three nights camped outside Walter Reed military hospital after Trump was admitted with the coronavirus.

Terry, who is unemployed, said he was hooked after attending his first rally. “It was the most awesome thing I’ve ever experienced in my life,” he said. “What you see on TV and when you see him in person, is two different things. It’s almost unexplainable.”

To him, it's about the camaraderie: “We’re all standing together, we’re all smiling, we’re all laughing.” The community: “There’s three or four people sitting in my car that I know from other rallies.” And the common purpose: “Just standing up for my country."

That rhetoric was echoed by Bob Wardrop, 55, who arrived from Long Island around 9 p.m. to be “part of the movement.” In his telling, he and other Trump supporters were continuing the fight of their “forefathers that fought the British hundreds of years ago."

“We’re still fighting that now because they’re trying to overthrow us and take over our country,” he said.

By morning, the crowd had grown. Thousands snaked around a holding area, with trucks selling funnel cakes and cotton candy. A parking lot several blocks away had transformed into a Trump bazaar where traveling merchants were selling shirts and buttons.

The morning arrivals included Celeste March, 58, from Elverson, Pennsylvania, who had seen Trump once in 2016 and was determined to see him again before Nov. 3.

And while some dismiss the rallies as an ego project for a president who revels in the adoration of his crowds, campaign spokeswoman Samantha Zager said the events are tools to energize volunteers, drive media coverage and collect voter data.

Indeed, the Trump campaign estimates the events have generated tens of millions of dollars a week in free television coverage. While many rally-goers are loyal Trump supporters who don't need motivation, the campaign said 22% of those who attended the Lititz rally were not Republicans and 21% had not voted in 2016.

Like his Twitter account, “it allows him to connect directly with the people without the filter of the media," Gigicos said. "It’s him with the people. And it was remarkable to watch and to see how he resonated."

“There’s a kind of a populist feel," added Douglas Brinkley, a presidential historian at Rice University. “It’s about being part of a spectacle, which is different from a campaign rally, which is typically a little bit more intellectual in presentation.”

The phenomenon, he said, is not unique in American history.

He pointed to the 1840 election when William Henry Harrison gave out free alcohol at events nicknamed “booze rallies" during a “last-minute crazy physical push like you see Trump resorting to.”

Brinkley tied the events to a long religious tradition tracing from the second great awakening Protestant revival of the early 1800s, when ministers traveled from city to city, to evangelist Billy Graham’s crusades.

“A religious fervor gets developed, and it becomes sort of like a cult-based atmosphere,” he said.

Sociologist Arlie Hochschild, who has been studying Trump supporters, agreed that he had tapped into religious imagery that secular liberals often missed.

Trump “is saying, ‘Oh I’m surrounded by enemies and look how I’m suffering. And I suffer for you.’ So it’s got a religious metaphor it’s tapping into," she said, combined with elements of a love affair.

“He needs us. He's feeding off of us. So we must be pretty powerful," she said, describing his supporters.

Trump, who is notoriously superstitious, has refrained from weighing in on his future if he loses. But some have speculated he might continue to tour the country, regardless of the outcome.

“Do I see him going out there and rallying Americans behind his country? Absolutely. I think he should," said Gigicos, who believes Trump will win reelection. “He loves America, and he is the Republican Party right now, so why wouldn’t he?”

Those who have been part of the movement agree.

“I think it will endure. I think there’s going to be people out there that have kind of been brought into the political fray,” said James Epley, who worked for Trump's 2016 campaign and now sells merchandise at Trump rallies and online under the “Silent Majority” trademark.

Reidler, who volunteered for the campaign this summer, said that if Trump loses, she plans to “see what I can do to get involved.”

“It’s sort of filled that void that I haven’t had (filled) for a long time," she said. “And it just seems important.”