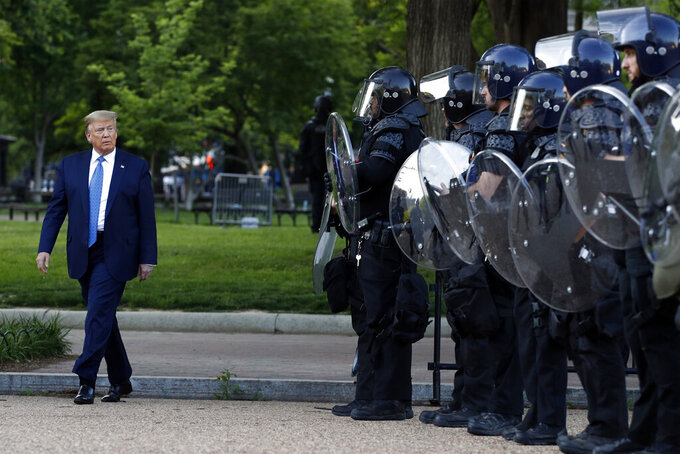 President Donald Trump walks past police in Lafayette Park after he visited outside St. John's Church across from the White House Monday, June 1, 2020, in Washington. Part of the church was set on fire during protests on Sunday night. (AP Photo/Patrick Semansky)

WASHINGTON (AP) — The mumbling and dodging this week by Republicans came straight from the GOP playbook that helped the party endure President Donald Trump’s cringe-inducing choices.

But when Trump was caught bragging of sexual assault and seeking political help from Ukraine, the country was relatively comfortable. Now, the nation is struggling with crises that affect every single American: a pandemic with more than 100,000 dead. Forty million out of work. The police asphyxiation of George Floyd and the resulting protests, race riots and suppression by the state.

America is on edge. Elections loom, including Trump's. And the agony of Republicans over defending the president has never been more acute or on display.

“I’m late for lunch,” Sen. Rob Portman, R-Ohio, told reporters Tuesday when asked whether Trump's use of force against peaceful protesters was the right thing to do.

Sen. Pat Roberts, R-Kan., who is retiring, said, “I don’t have any comment on that.”

The phenomenon is as old as Trump's bid for president, and works like this: Trump does something that breaks norms. Republicans stand with him on policy when they can, or at least don't defy him. He says he's a victim of “haters” like Democrats and the media. Most in the GOP avoid directly criticizing him, even when they find his conduct unhelpful or offensive to their values and goals.

Even now, as they squirm about the president's suggestion of using the military to enforce the law, most Republicans aren't breaking with Trump. Staying mum is a popular choice. But the crises shaking the United States are forcing members of the president's party to work harder to dodge questions about when, and how long, to stand with him.

The scene in Washington on Monday sharpened the choice. Trump, apparently furious that he had been portrayed as cowering in a White House bunker, appeared in the Rose Garden to declare himself the president of “law and order." Outside the gates, nearly 30 minutes before a 7 p.m. curfew, federal forces abruptly used what they said were smoke canisters and pepper balls to drive back a crowd of peaceful protesters.

The reason soon became clear: Trump, surrounded by Cabinet members and aides, strolled across Lafayette Park to St. John’s Church for a photo op. That night, Blackhawk helicopters hovered at rooftop level over the streets to disperse crowds.

Throughout, the administration discussed using military force, including the Insurrection Act of 1807, to “dominate” the streets. National security experts widely denounced that talk. Trump declared his rhetoric had tamped down the unrest, and by Wednesday the White House had begun to lose interest in the plan.

But the upheaval had drawn out Republicans opposed to Trump's conduct.

“There is no right to riot, no right to destroy others’ property, and no right to throw rocks at police,” said Sen. Ben Sasse, R-Neb., a frequent Trump critic who is up for reelection. “But there is a fundamental — a constitutional — right to protest, and I’m against clearing out a peaceful protest for a photo op that treats the word of God as a political prop.”

Sen. Susan Collins of Maine, one of the most vulnerable Senate Republicans seeking reelection, said it was “painful to watch peaceful protesters to be subjected to tear gas in order for the president to go across the street to a church that I believe he’s attended only once."

“President Trump’s walk to St. John's was confrontational, at the wrong time of day, and it distracted from his important message in the Rose Garden about our national grief, racism, peaceful protests, and lawful assembly,” added Sen. James Lankford, R-Okla., who is not on the ballot this year. “The President’s important message was drowned out by an awkward photo op.”

The president noticed, and name-checked the trio.

“You got it wrong! If the protesters were so peaceful, why did they light the Church on fire the night before? People liked my walk to this historic place of worship!” he tweeted Wednesday, suggesting that “Sen. Susan Collins, Sen. James Lankford, Sen. Ben Sasse” read a specific article.

He took no such aim at Sen. Tim Scott, R-S.C., the only black Republican in the Senate.

“If your question is, should you use tear gas to clear a path so the president can go have a photo op, the answer is no,” Scott told Politico.

It's too early to know whether Trump's ardent core of supporters is sticking with him on his handling of the crisis over Floyd's killing. In recent polls, Trump has consistently won high approval among his base for his handling of the economy, the pandemic and more.

And he has vocal allies. Sen. Tom Cotton, R-Ark., wrote in a New York Times op-ed Tuesday that local law enforcement needs the backup of active-duty military forces to tamp down unrest in the U.S.

“The only way to end this insurrection,” Cotton, a decorated Army veteran, said in a statement, "is the overwhelming display of force.”

Meanwhile, the tribulations of Trump's defense secretary served up a real-time example Wednesday of the potential consequences of breaking from the president.

Defense Secretary Mike Esper, who allowed himself to be squarely at the center of Trump's photo op at St. Johns, scrambled. Just a year into his job, Esper was quoted by NBC News as saying that in the moment, he didn't know he was walking to a photo op. And he explicitly said he opposed using active-duty troops “only in the most urgent and dire of situations.”

“We are not in one of those situations now,” he added.

The message was not received well in the White House.