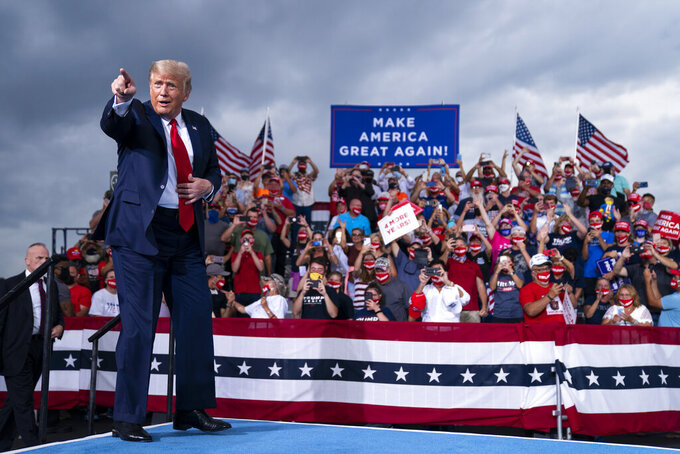 NEW YORK (AP) — President Donald Trump and his Republican Party jointly raised $210 million in August, a robust sum but one dwarfed by the record $364.5 million raised by Democrats and their nominee, Joe Biden.

Trump’s campaign released its figure Wednesday, several days later than usual and nearly a week after the Biden campaign unveiled its total, the highest for any one month during a presidential campaign. The president’s reelection team said it brought in more money during its party’s convention than the Democrats did in theirs, and officials insisted they “will have all the resources we need” ahead of November.

“Both campaigns are raising massive amounts of money but have very different priorities about how to spend it,” said Trump campaign manager Bill Stepien.

“In addition to advertising, President Trump’s campaign has invested heavily in a muscular field operation and ground game that will turn out our voters, while the Biden campaign is waging almost exclusively an air war. We like our strategy better.”

But the noticeable fundraising gap between the two candidates was certain to further rattle Republicans already nervous about Biden’s advantage over Trump in some battleground states that could decide the election. And whispers about a financial disadvantage led Trump himself this week to suggest he may put some of his own fortune into the race.

Biden’s August total spoke to the enthusiasm among Democrats to oust Trump from office. The flood of new contributions came from grass-roots supporters as well as deep-pocketed donors, and should alleviate any lingering concern over whether Democrats will be able to inundate the airwaves in key states.

The Trump campaign, however, faces questions about how it has managed to lose a massive financial advantage. Announcing for reelection the day of his inauguration in 2017, which allowed him to begin raising money right away, Trump built an enormous war chest early on that advisers believed put him at a big advantage over the eventual Democratic nominee.

Trump’s reelection effort, including the Republican National Committee, has spent more than $800 million so far, while Biden and the Democrats have spent about $414 million through July, according to campaign spending reports. But Trump’s team has also gone dark on the airwaves for stretches as the general election has heated up, raising questions as to whether it was short on cash.

Trump campaign officials have kicked off a review of expenditures, including those authorized by former campaign manager Brad Parscale, who was demoted this summer. Some of his decisions have raised eyebrows, including a $100 million blitz earlier this year before voters were largely paying attention, though that plan was defended by Trump in a tweet Tuesday.

Parscale also had a car and driver, unusual perks for a campaign manager, and his spending was the subject of an ad campaign by the Lincoln Project, a group of current and former Republicans looking to defeat Trump. The ad imagined a glitzy Parscale lifestyle full of luxury cars and a tony condo in Florida.

The ad infuriated Trump, who has long been sensitive to the perception that others are enriching themselves on his name. And many in the campaign, who largely liked Parscale, grumbled that he rarely showed in the suburban Virginia campaign headquarters, instead frequently calling in from his home in Ft. Lauderdale.

Some of the campaign’s expenditures clearly were designed with the president in mind, including a series of cable buys solely in Washington, a Democratic stronghold yet a TV market personally viewed by Trump, a voracious consumer of television news.

Parscale had been a favorite of Jared Kushner, the president’s son-in-law perceived to be the de facto campaign manager. But Kushner soured on Parscale since the debacle of Trump’s intended comeback rally in Tulsa, Oklahoma, this summer and the president has complained to advisers that the campaign squandered its massive fundraising advantage, according to two campaign officials not authorized to speak publicly about private conversations.

But even Parscale’s internal critics give him credit for helping the Trump campaign construct an unparalleled Republican operation to attract small donors online. Parscale, who did not respond to a request for comment, directed a major investment in digital ads and list-building that appears to have largely paid for itself.

Stepien, who replaced Parscale as campaign manager in July, says he is “carefully managing the budget.” He also says the team’s advertising will be “nimble,” and include a TV spree in early voting states as well as an urban radio campaign in Minnesota, Wisconsin, Michigan, North Carolina, Georgia, and Florida that will contrast Trump’s record for Black voters with Biden’s. That campaign will be aimed just as much at suburban white listeners.

“We have much more money than we had last time going into the last two months. But if we needed any more, I’d put it up,” Trump said Tuesday, vowing to open his wallet. “If I have to, I would.”

Campaign officials, however, privately acknowledge that it is unlikely Trump will spend much of his own money, something he resisted doing during the general election four years ago.

Perhaps in an effort to bury disappointing news, the campaign released its numbers Wednesday just a short time after the release of explosive excerpts from Bob Woodward's book in which Trump acknowledges knowingly downplaying the severity of the coronavirus pandemic to the American public.

In August, as the president’s campaign held a busy calendar of events, he upped his fundraising haul from $72 million in July. Biden’s campaign raised $49 million in July, and Democratic officials attributed the eye-popping amount raised in August to antipathy toward Trump, the selection of California Sen. Kamala Harris as his running mate and a convention that showcased the nominee’s empathy.