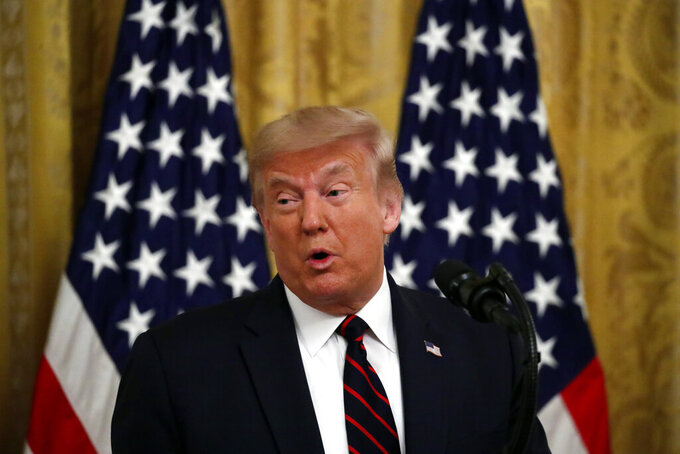 President Donald Trump speaks during a signing ceremony for H.R. 1957 – "The Great American Outdoors Act," in the East Room of the White House, Tuesday, Aug. 4, 2020, in Washington. (AP Photo/Alex Brandon)

WASHINGTON (AP) — President Donald Trump signed legislation Tuesday that will devote nearly $3 billion a year to conservation projects, outdoor recreation and maintenance of national parks and other public lands following its overwhelming approval by both parties in Congress.

“There hasn’t been anything like this since Teddy Roosevelt, I suspect,” Trump said, seemingly comparing himself to the 26th president, an avowed environmentalist who created many national parks, forests and monuments that millions of Americans flock to each year.

Supporters say the Great American Outdoors Act is the most significant conservation legislation enacted in nearly half a century. Opponents countered that the money isn't enough to cover the estimated $20 billion maintenance backlog on federally owned lands.

At a White House bill-signing ceremony, Trump failed to give Democrats any credit for their role in helping to pass the measure, mispronounced the name of one of America's most famous national parks, blamed a maintenance backlog that has been decades in the making on the Obama administration and claimed to have deterred a march to Washington that had been planned to tear down monuments in the nation's capital. No such march was ever planned.

The Great American Outdoors Act requires full, permanent funding of the popular Land and Water Conservation Fund and addresses the maintenance backlog facing national parks and public lands. The law would spend about $900 million a year — double current spending — on the conservation fund and another $1.9 billion per year on improvements at national parks, forests, wildlife refuges and range lands.

Trump in the budget proposals he has sent to Congress had previously recommended cutting money allocated to the fund, but reversed course and requested full funding in March.

The maintenance backlog has been a problem for decades, through Republican and Democratic administrations. Trump falsely claimed it was caused by the “last administration.”

The House and the Senate cleared the bill by overwhelming bipartisan margins this summer, including significant support from congressional Democrats. No Democratic lawmakers attended the ceremony and Trump, in his remarks, credited only Republicans.

Asked why Democrats weren't recognized, White House press secretary Kayleigh McEnany said it was because Democrats and Republicans — including the administration — have yet to agree on extending now-expired coronavirus relief payments and protections.

Her answer focused on Senate Democrats' rejection of a proposal by Sen. Martha McSally, R-Ariz., for a one-week extension of a special federal unemployment benefit. She ignored that Senate Republicans themselves are divided over how to proceed on a larger relief package.

“The only thing we’re recognizing about congressional Democrats right now is how appalling it is that there are Americans who are going without paychecks because they refused to partner with Martha McSally, Republicans and the president in ensuring that those payments go out.”

Among the bills' congressional champions are Republican Sens. Cory Gardner of Colorado and Steve Daines of Montana. Both are among the Senate's most vulnerable incumbents, and each one represents a state where the outdoor economy and tourism at sites such as the Rocky Mountain and Yellowstone national parks play an outsize role.

Daines and Gardner persuaded Trump to support the legislation, which Gardner has made the cornerstone of his reelection campaign.

Democratic Sens. Maria Cantwell of Washington state, Joe Manchin of West Virginia and Tom Udall of New Mexico all were instrumental in getting the bill passed. Cantwell has spent years working to reauthorize and fund the Land and Water Conservation Fund, and she worked with Gardner and Daines to make it happen.

“For all of us who’ve fought for years to protect our public lands and invest in our outdoor recreation economy, today is a historic win for America’s beloved shared spaces," Cantwell said in a statement that criticized environmental and public health rollbacks by Trump that benefit the oil and gas industry.

The law’s mostly Republican opponents complained it would not eliminate an estimated $20 billion maintenance backlog on 640 million acres (259 million hectares) of federally owned lands. The legislation authorizes $9.5 billion for maintenance over five years.

Lawmakers from Gulf Coast states also complained that their states get too small a share of revenue from offshore oil and gas drilling that is used to replenish the conservation fund.

Ivanka Trump, the Republican president's daughter and adviser who supported the legislation, described it at the ceremony as a “great legacy” for the administration as well as the country.

In discussing the beauty of national parks Tuesday, President Trump tripped over one name when he referred to Yosemite's towering sequoia trees. He twice mispronounced “Yosemite’s” as yoh-SEH'-mytz instead of yoh-SEM’-it-eez.

Trump also claimed an executive order highlighting the threat of up to 10 years in prison for defacing federal monuments was the reason a march to Washington for the sole purpose of destroying statues was canceled.

People protesting racial injustice after George Floyd's death in police custody in May began toppling monuments around the country of Confederate and other figures considered racist, but no such march to Washington was ever planned.

“They were having a march on Washington to knock down a lot of monuments, and I signed it before the march,” Trump said of the executive order he signed June 26. “We announced it at a news conference that you go to jail for 10 years if you knock down a monument, and the march to Washington never happened. I don’t know -- that’s strange how that all works. Isn’t it, though? Isn’t that a beautiful thing?”

This story has been corrected to show the area with the maintenance backlog is 640 million acres, not 640 acres.