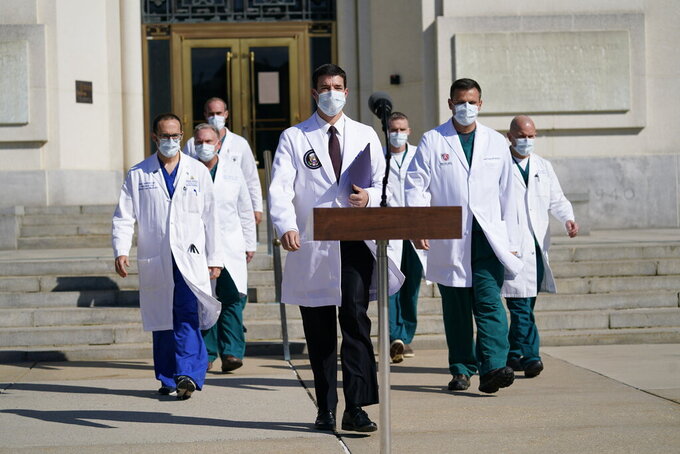 WASHINGTON (AP) — President Donald Trump's doctor leaned on a federal health privacy law Monday to duck certain questions about the president's treatment for COVID-19, while readily sharing other details of his patient's condition.

But a leading expert on the Health Insurance Portability and Accountability Act said a more likely reason for Dr. Sean Conley's selective disclosures appears to be Trump's comfort level in fully revealing his medical information.

"That's a little head-scratcher," said Deven McGraw, a former career government lawyer who oversaw enforcement of the 1996 medical privacy statute. “It's quite possible the doctor sat down with the president and asked which information is OK to disclose.”

At a press briefing at Walter Reed National Military Medical Center, Conley, the White House physician, reported the president’s blood pressure — a little high at 134/78 — and respiration and heart rates, which were both in the normal ranges.

But when reporters pressed for details on the results of lung scans and when Trump had last tested negative for COVID-19, the doctor demurred, citing HIPAA, as the law is commonly known.

“There is no special protection for lung scans,” McGraw pointed out.

“It really is what the president authorizes to be disclosed," she explained. "So I am going to have to assume there was a judgment call on what information the president was comfortable releasing to the public.”

The selective disclosure raised more questions about what the president's doctors aren’t telling the public. Trump returned to the White House later Monday.

House Speaker Nancy Pelosi said it’s “disconcerting” that information coming from Trump’s physicians “must be approved by the president.”

Pronounced “hippah,” the law essentially prohibits disclosure of a person’s medical information without their consent. Many people hear about HIPAA when they call the hospital seeking information about the condition of a relative and they're told they can't have it because of the law.

“HIPAA kinda precludes me from going into too much depth in things that, you know, I’m not (at) liberty or he doesn’t wish to be discussed,” said Conley, who holds the rank of Navy commander.

McGraw said there's a question about whether the White House physician may even be covered by HIPAA. The law is written to apply to doctors and entities that bill for insurance coverage.

That said, a president, like any other individual, has the right to control personal medical information, said Iliana Peters, who also served as a career lawyer overseeing HIPAA enforcement at the Department of Health and Human Services.

“As the person who is the subject of the records, (Trump) owns the right to privacy over his medical record and he gets to decide how that information is shared certainly with the public, and certainly with the media,” said Peters. “That is the case with any one of us as a patient.”

Peters said “there may be multiple things going on here in that certain disclosures have been authorized and others haven’t.”

Speaking on MSNBC, Pelosi argued that a president has an obligation to be fully transparent about health care concerns. Selective disclosure is “not what the public is owed about the state of health of the president of the United States.”

A president's doctors “bear responsibility not only to the president, but also to a public counting on neutral, objective information,” Bailey said in a statement.

“The patient-physician relationship is paramount in medicine, including the right to privacy and confidentiality that allows for open communication between the patient and physician, which all patients are entitled to," she added. "At the same time, it is important for our presidents to provide open and transparent information about their health.”

Privacy lawyer McGraw is now chief regulatory officer with Ciitizen, a health technology company she cofounded that helps people collect and organize their medical records to help them get the best treatment.

Peters is a health privacy and data security expert with Polsinelli, a national law firm serving a range of business clients.