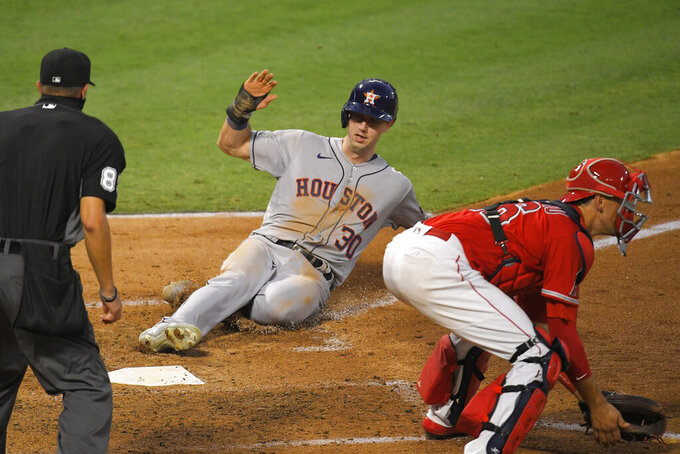 ANAHEIM, Calif. (AP) — Houston manager Dusty Baker will take any wins he can get, even if they provide some anxiety.

The Astros had a season-high 13 hits in their 9-6 victory over the Los Angeles Angels on Friday night, but it was far from a picturesque opening to their 10-game road trip. Six Houston pitchers issued 12 walks, but the defense turned three double plays and were able to respond to Angels' rallies with response runs.

“Right now we are scuffling for victories. That was a tough one all the way down to the end. I'm just glad we were able to come out on top,” said Baker of the 4-hour, 21-minute game, which is the longest nine-inning contest in Astros and Angels Stadium history.

Kyle Tucker had three hits and a career-high four RBIs for the Astros, who snapped a two-game losing streak after starting the season 3-1. Tucker, the fifth overall pick in the 2015 draft, is getting a chance to be a regular in the lineup with Yordan Álvarez out due to an undisclosed injury. Tucker put Houston on the board with a two-run double in the second. With the Astros leading 6-4 in the seventh, he put the game away with a two-run single to right.

“I found a couple holes tonight, which was good,” he said.

Lance McCullers Jr., who missed last season after having Tommy John surgery on his right elbow, made his first road start in nearly two years. The right-hander struggled a bit with command in his four innings and wasn't able to retire the side once. He allowed four runs and six hits with four walks and four strikeouts.

Brian Goodwin had two hits, including a home run, and drove in three runs for the Angels, who have dropped three straight and five of their last six. Goodwin's RBI triple to right in the eighth brought the Angels within 8-6. They had runners on the corner with one out before Shohei Ohtani ground into an inning-ending double play.

Los Angeles also had runners on first and second with one out in the ninth, but Andre Scrubb retired the next two batters to pick up his first major-league save.

The Angels left 12 on base and were 3 for 18 with runners in scoring position.

“We hit some balls really well tonight with again nothing to really show for it at the end of the game. But the approach at the plate was outstanding," manager Joe Maddon said. "I thought we had great at-bats all night, we just didn’t score enough runs obviously and that’s the issue. We’ve got to do a better job of that.”

Matt Andriese.(0-1) faced the minimum in the first but couldn't get out of the second. Six of the first seven Astros reached base in the inning, with Tucker's double being the key hit.

The right-hander walked three in the frame, including one with the bases-loaded to George Springer which extended the lead to 3-0. He was one of nine pitchers that Joe Maddon used.

Due to the coronavirus pandemic preventing fans from being in stadiums, the Astros' first trip to Southern California this season is much quieter.

Dodgers fans were expected to make the trip en masse down to Anaheim to boo the Astros after it was revealed during the offseason that Houston illegally stole signs during its 2017 championship that culminated in a win over the Dodgers in Game 7 of the World Series.

A couple fans were in the parking lot before the game with signs mocking the Astros, but couldn’t get anywhere close to the stadium or their busses.

Springer came into the game with only one hit in his first 21 at-bats, but raised his batting average to .120 with two hits and two RBI's. He led off the game with a single to snap an 0 for 14 skid.

Jose Altuve is hitless in his last 13 at bats after going 0 for 3. The second baseman — who did drive in two runs — was hit by a pitch for the first time this season during the sixth inning but it didn't look intentional.

Goodwin got the Angels within 5-4 in the fourth when he lined a McCullers' sinker over the wall in the center. It was Goodwin's second home run in three nights. Springer mistimed his jump and lost his glove before it was retrieved by someone from Houston's bullpen.

Astros: Reliever Ryan Pressly (elbow soreness) could make his season debut as early as Saturday. ... P Bryan Abreu left the game in the seventh inning due to a cut on his finger.

Angels: Julio Teheran produced mixed results during his bullpen session on Thursday. Maddon said the plan is for the right-hander to throw another session, but he didn't know when that would take place.