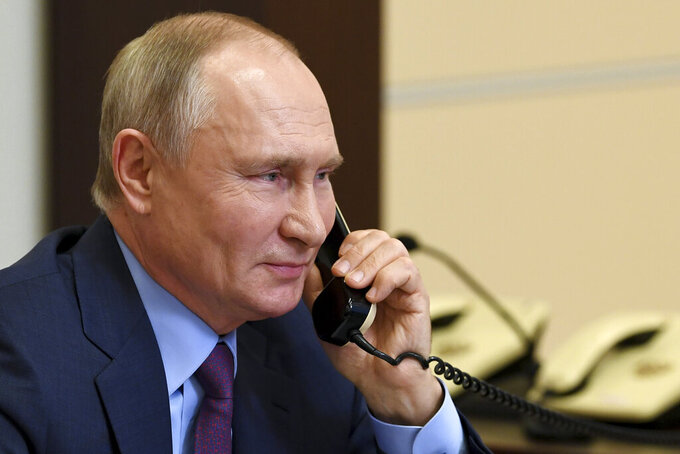 WASHINGTON (AP) — More than a month after the election, top Republicans finally acknowledged Joe Biden as the next U.S. president, a collapse in GOP resistance to the millions of voters who decisively chose the Democrat. Foreign leaders joined the parade, too, including Russia’s Vladimir Putin.

Speaking on Tuesday from the floor of the U.S. Senate where Biden spent 36 years of his career, Majority Leader Mitch McConnell congratulated his former colleague as president-elect. The two men spoke later in the day.

Secretary of State Mike Pompeo, meanwhile, was to meet with his likely successor in the new administration, Antony Blinken. And GOP Sen. Lindsey Graham of South Carolina, one of President Donald Trump's closest allies, said he'd spoken with some of Biden's Cabinet picks.

A similar shift unfolded in capitals across the world, where leaders including Russia's Putin and Mexico's Andrés Manuel López Obrador acknowledged Biden's win.

The moves came a day after electors nationwide formally cast votes affirming Biden's victory in last month's presidential election. And while that clears a more stable path for Biden to assume the presidency, it does little to stop Trump from continuing to try to undermine confidence in the results with baseless allegations that have been rejected by judges across the political spectrum.

“Tremendous evidence pouring in on voter fraud. There has never been anything like this in our Country!” Trump tweeted just as members of his party were publicly recognizing Biden's victory.

Hours later, in an overnight tweet that referenced McConnell, Trump wrote: “Too soon to give up. Republican Party must finally learn to fight. People are angry!”

The growing acknowledgment of reality in Washington was triggered by the Electoral College formally voting on Monday to seal Biden’s win with 306 votes to Trump's 232, the same margin that Trump pulled together four years ago. The normally humdrum political ceremony didn’t change the facts of the election but was nonetheless used as political cover by leading Republicans.

“Many of us had hoped the presidential election would yield a different result,” McConnell said. “But our system of government has the processes to determine who will be sworn in on Jan. 20. The Electoral College has spoken.”

The bureaucratic transition from Trump's government to Biden’s actually began weeks ago, despite the president’s legal challenges. Still, the suddenly conciliatory stance from many Republicans could thaw the political deep freeze that has gripped Washington lately.

Biden has been trying to build momentum as he prepares to assume the presidency while facing the historic challenge of vaccinating hundreds of millions of Americans against the coronavirus. In some of his most forceful remarks since the election, Biden is calling for unity but also calling Trump's attacks on the voting process “unconscionable” and insisting it is time to “turn the page.'

“We need to work together, give each other a chance, and lower the temperature,” Biden said in a speech Monday.

Still, the shift coming so late in the tone from Republicans has left the president-elect with barely a month to finish building out key parts his new government. Some say the GOP about-face won't mean much at this point.

“Even them doing this now, the damage has been done because they’ve blocked, they’ve interrupted,” said Anthony Robinson, a former Obama administration appointee who served several national security policy roles including during the transition to the Trump administration in 2016.

“I don’t want to say, 'Who cares?,' but it definitely doesn’t symbolize a smooth transition,” said Robinson, who is now political director of the National Democratic Training Committee, which trains candidates and campaign staffers all over the country.

Biden's first priority will be the fair and efficient distribution of vaccines against the virus. The president-elect said Tuesday that he would follow the advice of Dr. Anthony Fauci, the nation's top infectious disease expert, who says that getting the president-elect himself vaccinated as soon as possible is a matter of national security.

“Dr. Fauci recommends I get the vaccine sooner than later. I want to make sure we do it by the numbers,” Biden said, adding that he'd be immunized publicly, which could help build public trust in the vaccine.

Trump’s continued opposition to Biden, meanwhile, may still present roadblocks, especially in the U.S. House where Republicans as recently as last week were introducing legislation to punish members of their party who might be seen as urging Trump to “concede prematurely.” Other top Trump administration Cabinet officials haven't yet followed the lead of Pompeo, who plans to meet Thursday with Blinken, Biden’s secretary of state nominee.

“The president is still involved in ongoing litigation related to the election," said White House press secretary Kayleigh McEnany, calling the Electoral College vote “one step in the constitutional process.”

Rick Tyler, a Republican operative and fierce Trump critic, said it seemed at first like "the Electoral College had broken the evil spell that Trump cast across the Republican Party.”

But he said the attacks on the electoral system that Trump is continuing to wage have many of his supporters now questioning American democracy itself— and that won’t quickly dissipate just because some Republicans and world leaders are now willing to say conciliatory things.

“There really are 50-plus million people who no longer have trust in our system, and that’s a dangerous thing,” said Tyler. He said Biden must "figure out a way to restore that trust. And it can’t just be a partisan attack on Republicans for, frankly, being stupid.”

Also looming large is the divided U.S. Senate, where majority control will depend on the outcome of two special elections in Georgia on Jan. 5. Unless Democrats win both those races, Senate Republicans will have the power to block many of Biden's Cabinet nominations, not to mention thwart his policy initiatives.

Underscoring the urgency on that score, Biden traveled Tuesday to Georgia, his first trip beyond Delaware and southeast Pennsylvania since the election.

“I need two senators from this state who want to get something done, not just get in the way,” Biden told a drive-in rally in Atlanta.