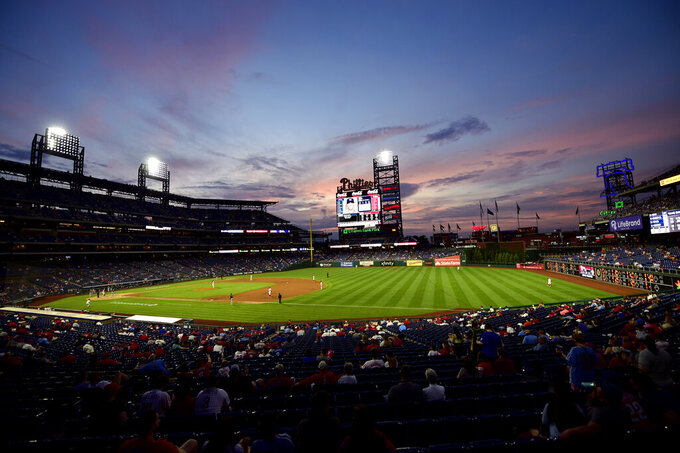 General view of Citizens Bank Park during the third inning of a baseball game between the Philadelphia Phillies and the Milwaukee Brewers, Tuesday, May 4, 2021, in Philadelphia. (AP Photo/Derik Hamilton)

"We are grateful that our state and region continue to be on a path toward improved health and a return to normalcy,” Twins president Dave St. Peter said in a statement.

Philadelphia started the season at 20% and will increase capacity from 11,000 to 16,000 for a series against Boston starting Friday and followed by games against Washington (June 4-6) and Atlanta (June 8-10). Citizens Bank Park will be allowed 100% capacity starting with the Phillies’ series against the New York Yankees on June 12-13. Limited pods will be available with socially-distanced seating.

Tailgating also will be allowed.

Milwaukee, which began at 25%, said the Brewers’ American Family Field will shift to 100% capacity starting June 25.

The New York Yankees and Mets were given permission by New York state to increase capacity from 20% to 100% at their ballparks for home games starting May 19, but only as long as fans are vaccinated against COVID-19. The Mets said they planned to have sections for vaccinated fans at full capacity and for unvaccinated fans with social distancing.

The Chicago Cubs will increase Wrigley Field’s capacity to 60% starting with a series against Cincinnati that begins May 28. That will leave maximum attendance at just under 25,000, and there will be a minimum of one open seat between pods within the same row.

Illinois and Chicago officials are requiring a designated area for fully vaccinated fans, who will be required to present proof of vaccination and photo ID.

The Chicago White Sox will also increase capacity to 60% at Guaranteed Rate Field starting with a game against St. Louis on May 24, also with a minimum of one open seat between pods within the same row. The White Sox will have two full capacity sections for vaccinated fans when they host Kansas City this weekend.

Texas was the only one of the major league teams to start the season at 100% capacity.

Atlanta said April 28 it would move to 100% at Truist Park starting May 7, and Arizona announced May 5 that it would shift to 100% at Bank One Ballpark starting May 25. Washington said this week that Nationals Park would allow 100% capacity starting June 11 after Mayor Muriel Bowser issued an order allowing it.