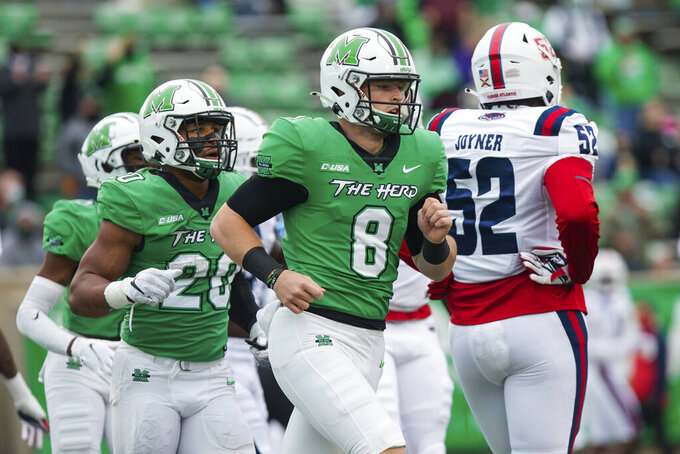 Marshall quarterback Grant Wells (8) and running back Brenden Knox (20) head to the sideline after a touchdown as the Herd takes on Florida Atlantic during an NCAA college football game at Joan C. Edwards Stadium, Saturday, Oct. 24, 2020, in Huntington, W.Va. (Sholten Singer/The Herald-Dispatch via AP)

Two Conference USA games scheduled for the weekend, including No. 19 Marshall at Florida International, have been postponed because of COVID-19 issues.

Marshall was scheduled to play Friday night, but FIU had to call off the game because of a lack of available scholarship players.

North Texas at UTEP on Saturday was called off because a surge in COVID-19 cases in El Paso, Texas, has led to a stay-at-home order in the city.

“We send our best wishes to the entire El Paso community as the face the challenge of dealing with the latest outbreak,” North Texas President Neal Smatresk said in a statement.

UTEP President Heather Wilson said the school was disappointed with North Texas' decision not to come to El Paso.

“We have a safe place to play and no players who are sick or in isolation,” Wilson said in a statement.

UTEP had decided to play the game without fans in attendance.

The four schools said they are working with C-USA to reschedule the games.

The number of games involving FBS teams postponed or canceled since Aug. 26 is up to 36.

A total of seven Conference USA league games have been postponed.

This is the second time in three weeks UTEP has had to call off a home game. The first postponement was because of COVID-19 issues with Southern Mississippi. In between, the Miners played and lost at Charlotte.

“We are proud of the diligence that our student-athletes, coaches and staff have shown to put us in a position to play every week,” Wilson said.