U of Iowa president to retire as school faces challenges 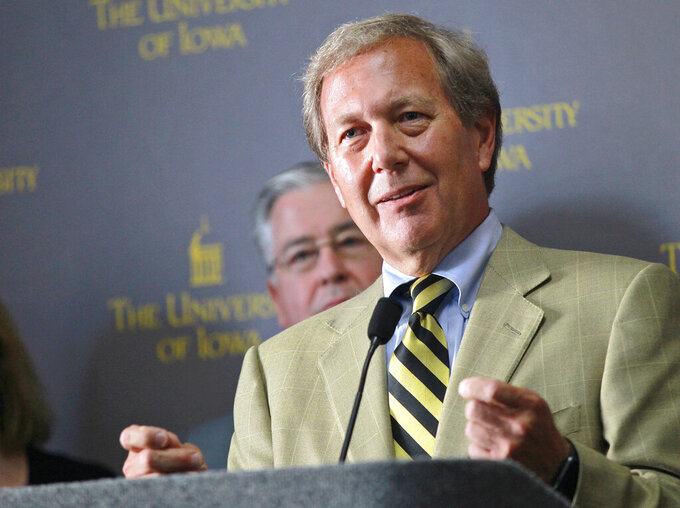 FILE - In this Sept. 3, 2015, file photo, Bruce Harreld speaks to media after he was introduced as the new University of Iowa president during a news conference in Iowa City, Iowa. Harreld announced plans on Thursday, Oct. 1, 2020, to retire after the school's board finds his successor. Harreld, a former corporate executive and Harvard Business School instructor, has led the Big Ten university since 2015. (David Scrivner/Iowa City Press-Citizen via AP, File)

IOWA CITY, Iowa (AP) — University of Iowa President Bruce Harreld said Thursday he will retire once the school's governing board finds his successor, leaving with years left on his contract as the school faces mounting budget, personnel and public health challenges.

Harreld, a former corporate executive and Harvard Business School instructor, has led the Big Ten university since 2015. His tenure has been difficult in recent months as the school has faced a devastating coronavirus outbreak, deep budget cuts and heavy turnover in key administrative positions.

The Iowa Board of Regents last year had extended Harreld's initial five-year contract through June 2023.

Harreld, 69, said that he has asked the regents to begin the search for his replacement and will remain until that person is in place. He said the search could take longer than usual given the coronavirus pandemic and so he wanted to make his plans known as soon as possible.

“I believe institutions suffer when they rush the search for a new leader and that a smooth, deliberate process positions the new president and the university for success,” he said in a statement.

The board said it would hold a virtual meeting Monday to begin the search process, which will include hiring a search firm and forming a committee to vet candidates. Board President Michael Richards thanked Harreld for his service.

“I have appreciated the tireless work that he has put in over the past five years, keeping UI among the nation’s top public universities," Richards said.

Harreld's looming departure will add to a leadership drain on campus. His provost stepped down over the summer after only a year on the job, and the school in July abruptly replaced the dean of its largest college. Their replacements are serving in interim capacities.

Harreld has faced criticism for bringing students back to campus in August without testing them for the virus, which quickly spread after they packed into campus bars in the first weeks.

Nearly 2,000 students have reported coronavirus infections to the university since then. Gov. Kim Reynolds has since closed the bars temporarily, and the outbreak has subsided.

Harreld's 2015 selection, orchestrated by Republican appointees on the regents, drew criticism from faculty, who had overwhelmingly backed other finalists who had more experience.

The former IBM executive eventually won over some critics, who say the mission changes and privatization they feared under Harreld did not fully come to pass.

Harreld succeeded in implementing a plan earlier this year to turn over the school's utility system to for-profit operators in exchange for a $1.1 billion upfront payment, which has been invested in an endowment for future campus funding.

He called that a creative way to raise money in an era of tight state funding, but critics called it a risky deal that could backfire if the stock market falters.

Harreld also merged the UI Alumni Association and the UI Foundation to create the UI Center for Advancement, hoping to better coordinate the school's fundraising and alumni engagement. He changed how academic units set their budgets, aiming to improve transparency and give colleges more control.

Harreld has been a staunch supporter throughout his tenure of Iowa athletic director Gary Barta and footall coach Kirk Ferentz. He was among the few Big Ten leaders who dissented from an August vote to postpone the football season for safety reasons.