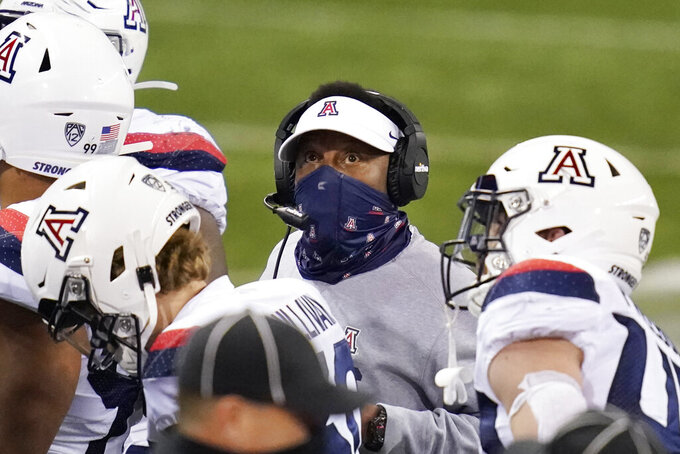 Arizona coach Kevin Sumlin looks up at the scoreboard during a timeout in the first half of the team's NCAA college football game against Washington on Saturday, Nov. 21, 2020, in Seattle. (AP Photo/Elaine Thompson)

LOS ANGELES (AP) — Arizona and UCLA are in their third seasons of the Kevin Sumlin and Chip Kelly eras, but going into Saturday's game at the Rose Bowl, the two programs are trending in opposite directions.

The Wildcats (0-2) haven’t won in more than a year and have dropped a program-record nine consecutive games. Meanwhile, the Bruins (1-2) are finally showing signs of progress under Kelly by being competitive in all three games.

Arizona fell behind 37-0 to Washington before scoring 27 fourth-quarter points in a 44-27 loss. UCLA had four turnovers at No. 11 Oregon that led to 28 points points by the Ducks in a 38-35 defeat.

“There’s a lot of really positive things going on, but it hasn’t shown on the scoreboard," Kelly said. “We're in every game that we've played so far. We feel like if we can clean up the self-inflicted wounds that we can continue to get better.”

Sumlin is 9-17 at Arizona, which is one win better than Kelly's record at Westwood. While a win for the Bruins would buoy their chances of a bowl game, the Wildcats need a victory to take some pressure off their coach.

“There’s a lot of guys that played (this season) that have lost two games,” Sumlin said. “The losing streak, for me, is different. I’m the common denominator. We can lump it all into everything. But you can just lump that on me, because, in the end, my name’s on it.”

WHO STARTS AT QB FOR UCLA?

Redshirt freshman Chase Griffin will likely be the starter for the second straight game after he was made available for interviews earlier this week. Junior Dorian Thompson-Robinson is one of at least nine players who could miss the Arizona game due to COVID-19 contract tracing.

Pac-12 protocols for COVID-19 require players who have been in close contact with someone who tests positive to quarantine for at least 14 days. Thompson-Robinson — who has thrown seven touchdowns and two interceptions in two games — became the first UCLA quarterback to throw for 300 yards and run for 100 in a loss at Colorado.

Griffin was 19 of 31 for 191 yards and a touchdown but also committed three turnovers (two interceptions and a fumble). He said the game plan didn't change that much because he was the starter and that he wasn't nervous facing the Ducks.

“You literally don’t know who is going to be available on game day until you get to the last day of protocol testing," Kelly said. "That’s why we have our fingers crossed and we’re just going to do what we continue to do and hope nobody tests positive and go with the guys who practiced during the week.”

Arizona's Grant Gunnell is second in the conference with a 68% completion rate, has thrown six touchdowns and hasn't been intercepted in his last 73 attempts.

The sophomore, though, was frustrated often during last week's loss at Washington due to protection issues, getting sacked five times. Gunnell has had success against the Bruins in the past. His first collegiate start was against UCLA last season when he threw for 352 yards and a touchdown in a 20-17 victory.

If Gunnell is going to have any chance of being successful, his offensive line has to perform better.

The Wildcats have allowed nine sacks this season and face a UCLA defense that might be the most improved unit in the nation. It is 20th among Power Five conference teams, allowing 374.3 yards per game after being the fifth worst last season (456.2 yards per game).

The Bruins — who have held back-to-back opponents to under 100 yards rushing for the first time in four years — also have 27 tackles for loss and 10 sacks. Defensive lineman Osa Odighizuwa is second in the conference with 3 sacks.

UCLA running back Demetric Felton, whose 278 all-purpose yards at Oregon was the fifth-best total by a player nationally this season.

The senior had career highs in carries (34) and yards (167), along with two touchdowns against the Ducks.