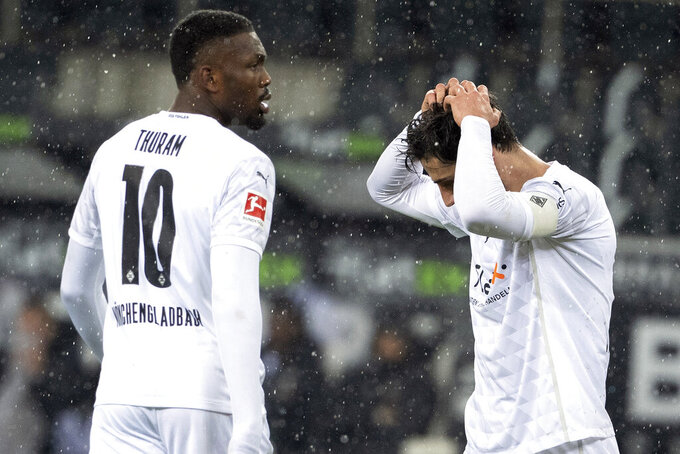 NYON, Switzerland (AP) — UEFA moved Manchester City's Champions League last-16 game at Borussia Mönchengladbach to a neutral venue in Hungary on Monday because of German restrictions on arrivals from Britain amid the coronavirus pandemic.

Gladbach had been looking for a new venue for the Feb. 24 first-leg game because Germany bars almost all travel from Britain over concerns there about the spread of a more infectious variant. UEFA rules make it the home team's responsibility to find a suitable backup venue.

UEFA confirmed the game was moved to Puskás Aréna in Budapest, which is already hosting another rearranged Champions League first-leg game between Leipzig and Liverpool on Feb. 16.

The game marks the furthest Gladbach has got in European competition since the semifinals of the old European Cup in 1978.

“A last-16 game in the Champions League is an extraordinary event for Borussia Mönchengladbach that will now sadly take place without spectators and not in our own stadium,” Gladbach CEO Stephan Schippers said in a statement. “But we are happy that we can play at all.”

Budapest has become UEFA's go-to destination for rescheduled games. Puskás Aréna also held the Super Cup between Bayern Munich and Sevilla in September after it was shifted from Portugal, and the Hungarian capital also hosted a rescheduled Champions League qualifying game at another stadium. The Hungarian Football Federation president Sandor Csanyi is a billionaire businessman and one of the vice-presidents of UEFA and FIFA.

Molde is unable to host Hoffenheim in the first leg of the round of 32, which will be played at Villarreal’s stadium as a neutral venue on Feb. 18. Villarreal is still in the competition and hosts Salzburg one week later.