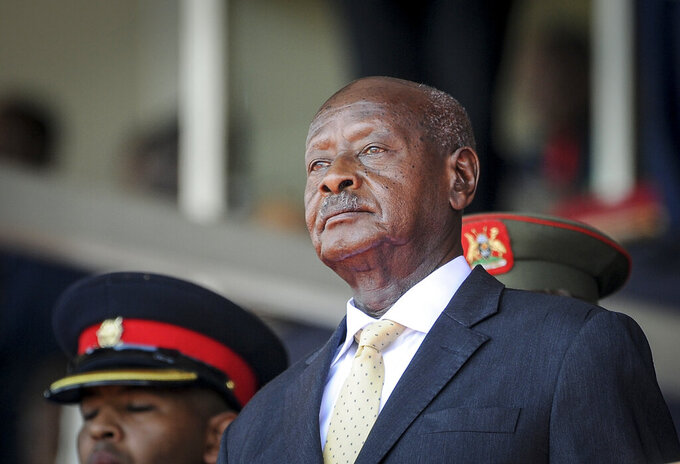 FILE- In this Feb. 11, 2020 file photo, Uganda's President Yoweri Museveni attends the state funeral of Kenya's former president Daniel Arap Moi in Nairobi, Kenya. Despite failing to dislodge the long-time leader Museveni, opposition challenger Bobi Wine has emerged from Uganda's Jan. 14, 2021 disputed polls as the country's most powerful opposition leader after his party won the most seats of any opposition group in the national assembly. (AP Photo/John Muchucha, File)

A judge will rule next week on a petition by Wine's attorneys seeking an end to the deployment of soldiers outside his property on the outskirts of the capital, Kampala. Wine, whose real name is Kyagulanyi Ssentamu, says he has been detained there for eight days.

Authorities say Wine can only leave his home under military escort because his presence in public allegedly threatens public safety. They are preventing visitors, including the U.S. ambassador, from seeing him. Police said, however, that eight lawyers were allowed to see Wine Thursday while the security forces maintain "preventive action and cover in the area.”

While lawyers argued for Wine’s freedom, President Yoweri Museveni was making a triumphant return to Kampala from his country estate, with stopovers where he waved at cheering crowds.

The detention of Wine has angered his supporters, who see it as an extension of the harassment he faced from security forces who frequently broke up his campaign events, citing measures to control the spread of the coronavirus.

Wine, a popular singer-turned-lawmaker, has captured the imagination of many at home and abroad in his generational clash with Museveni. Wine, who is 38, has called for the retirement of the 76-year-old president, a U.S. ally on regional security who took power in 1986. Museveni accuses Wine of being a foreign agent, which the opposition leader denies.

The house arrest of Wine is “having an impact on his ability to challenge the presidential election results, in what appears to be a ploy to prevent the (opposition National Unity Platform party) from going to court in time,” Deprose Muchena, an Amnesty International official, said in a statement calling the confinement “a blatant violation" of human rights.

A losing presidential candidate has 10 days from the announcement of final results to challenge them in court. Final results were declared on Jan. 16.

The European Union in a statement has urged authorities to respect “the free movement of all political actors and their supporters.”

Museveni won the Jan. 14 election with 58% of the vote while Wine had 34%, according to official results. Wine insists he won and has said he can prove that the military was stuffing ballot boxes, casting ballots for people and chasing voters away from polling stations.

Museveni has dismissed allegations of vote-rigging, calling the election “the most cheating-free” since independence from Britain in 1962. The East African country has never witnessed a peaceful transfer of power — one reason why even some within the ruling party publicly urge Museveni to preside over an orderly transition.

The election was marred by violence ahead of polling day as well as an internet shutdown that remained in force until Monday, when access was restored for most Ugandans. Social media sites remain restricted.