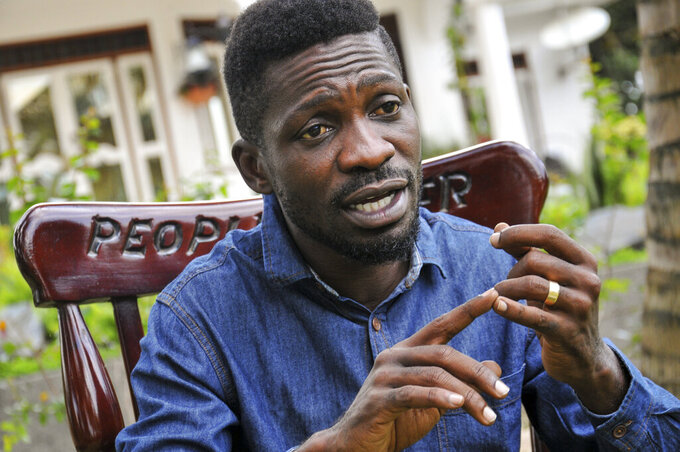 FILE - In this Friday, March 27, 2020 file photo, Ugandan musician, lawmaker and presidential aspirant Bobi Wine, whose real name is Kyagulanyi Ssentamu, speaks to The Associated Press in Kampala, Uganda. Police in Uganda have confronted opposition presidential candidate Bobi Wine during an online press conference, and he says they fired tear gas and bullets as they swarmed his car. Journalists watched Thursday, Jan. 7, 2021 as an officer appeared to drag Wine from the car while he pleaded that he had broken no law. (AP Photo/Ronald Kabuubi, File)

KAMPALA, Uganda (AP) — Police in Uganda confronted popular opposition presidential candidate Bobi Wine during his online press conference Thursday to announce a petition to the International Criminal Court over alleged abuses by security forces. He said they fired tear gas and bullets as they swarmed his car.

Journalists watched as an officer dragged Wine from the car while he pleaded that he had broken no law. “As you can see, I'm being arrested,” he said to the camera, before popping sounds were heard.

“You are embarrassing the country,” Wine told officers. He was later allowed to finish the briefing and drive on. He had spent the day campaigning, during which he said 23 members of his team had been arrested.

The confrontation played out hours after the deadly riot in the U.S. Capitol led to questions about whether some governments would be emboldened to push back harder against people invoking democratic ideals like fair elections.

The singer and opposition leader was announcing he is petitioning the ICC to investigate allegations of torture and other rights abuses in the East African country ahead of next week's election. The ICC receives hundreds such applications from around the world each year.

The 38-year-old Wine, whose real name is Kyagulanyi Ssentamu, has fired the imagination of many across Africa as he tries to unseat longtime President Yoweri Museveni, who has deployed the military to prevent what he sees as opposition attempts to create civil unrest that could cause regime change.

Wine and other opposition figures have called the 76-year-old Museveni a dictator. “Many atrocities are being committed on the orders of Museveni,” the singer told reporters.

Wine, arrested many times on various charges but never convicted, now says his life may be in danger. He now campaigns while wearing a bulletproof vest and helmet.

“I expect a live bullet targeted at me any time,” said Wine, who has sent his children to the United States over safety concerns.

When asked by the organizer whether he wanted to end the briefing, he said he felt safer with the cameras on.

At least 54 people were killed in Uganda's capital, Kampala, and other parts of the country in November as security forces put down riots provoked by the arrest of Wine for allegedly violating campaign regulations aimed at preventing the spread of the coronavirus.

Those deaths form a critical part of Wine’s petition to the ICC to investigate alleged acts of torture, mutilation and murder of civilian protesters.

The petition by Wine and two other alleged torture victims mentions Museveni, Security Minister Elly Tumwine and other security officials. The petitioners are represented by U.S.-based attorney Bruce Afran, who said he filed documents with The Hague-based court on Thursday.

Tumwine “issued the ‘shoot to kill’ orders nominally to target protestors who attacked police but the orders were deliberately targeted against civilian demonstrators,” says the complaint, which includes grisly photos of people purportedly mutilated during election-related violence.

Wine was a popular singer before he won a seat in parliament and attracted national attention as the beret-wearing leader of a movement known as “People Power.” He has been arrested many times and sometimes beaten in the past year for alleged offenses such as disobeying lawful orders.

Prosecutors at the ICC can take years to reach a decision on a petition. Before deciding whether to conduct a preliminary probe, they seek to filter out those that are clearly not within their jurisdiction. Those that do are then assessed for admissibility — whether the crimes are serious enough to merit an ICC investigation and whether the country in question is already investigating or prosecuting the allegations.

Finally, prosecutors gauge whether an investigation would be in the interest of justice.

Uganda is a signatory to the statute that created the ICC.

Other Ugandans citing similar rights abuses have in recent years petitioned the ICC, which in December declined to prosecute a case related to alleged abuses by security forces in a 2016 confrontation with supporters of a traditional ruler.

Museveni has ruled Uganda since 1986. He has defied many calls for his retirement, saying he has been elected many times by Ugandans who love him. He has spoken disparagingly of the ICC, calling it “a bunch of useless people.”

Ugandan polls are often marred by allegations of rigging. The country has never seen a peaceful transfer of power since independence from Britain in 1962.