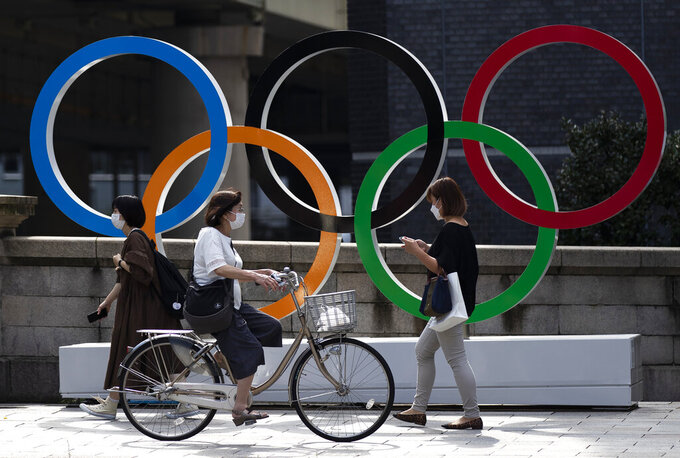 In this July 15, 2021, file photo, people walk by the Olympic rings installed by the Nippon Bashi bridge in Tokyo. A Ugandan athlete who fled during his pre-game training in western Japan last week has been found and being interviewed by police, officials said Tuesday, July 20, 2021. (AP Photo/Hiro Komae, File)

TOKYO (AP) — A Ugandan athlete who fled during pre-Olympics training in western Japan last week has been found and is being interviewed by police, officials said Tuesday.

Mie prefectural police in central Japan said 20-year-old weightlifter Julius Ssekitoleko was in the Yokkaichi city, 170 kilometers (105 miles) east of his host town in western Japan. Police are asking him what happened since he fled his hotel in Izumisano in the Osaka prefecture Friday, leaving behind a note saying he didn't want to return to his country.

Ssekitoleko left behind his luggage and a note saying he wanted to stay in Japan and work, Izumisano officials said. He did not meet Olympic standards in the latest international rankings released after he arrived Japan and was to return home this week.

The pandemic-delayed Olympics open Friday despite mounting concern about an upsurge of infections in Tokyo, which on Tuesday reported 1,387 cases, up 557 from a week ago.

On their arrival on June 19 at Narita International Airport, a member of the team tested positive and was quarantined, while the remaining eight members were allowed to travel more than 500 kilometers (300 miles) on a chartered bus to Izumisano.

Days later, a second member of the team tested positive, forcing seven town officials and drivers who had close contact with the team to self-isolate. Health officials said both infected Ugandans had the delta variant, which is believed to be more contagious.

The team, which ended its isolation and trained from July 7, headed to Tokyo's Olympic village on Tuesday without Ssekitoleko.