Uganda's leader says social media shut down ahead of polls 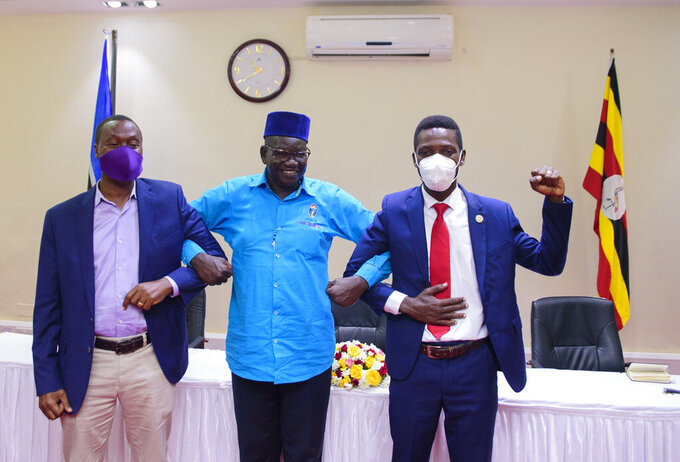 KAMPALA, Uganda (AP) — Ugandan President Yoweri Museveni said Tuesday that his government has shut down social media ahead of a tense election on Thursday, accusing Facebook and unnamed outside groups of “arrogance” after the social network this week removed Ugandan accounts linked to his reelection campaign.

“That social channel you are talking about, if it is going to operate in Uganda, it should be used equitably by everybody who wants to use it,” Museveni said of Facebook in a national address. “If you want to take sides against the (ruling party), then that group will not operate in Uganda.”

Museveni, dressed in a military jacket, said he was “sure the government has closed social media" and apologized to Ugandans for what he called an inconvenience.

Facebook on Monday said it had removed a network of accounts and pages that “used fake and duplicate accounts to manage pages, comment on other people’s content, impersonate users, re-share posts in groups to make them appear more popular than they were." The network was linked to a government ministry, it said.

There was no immediate Facebook statement in response to the president's comments.

Many Ugandans said Tuesday that Facebook and WhatsApp were not working. Twitter also appears to have been affected.

There are fears the internet will be shut down on polling day.

“This is unfortunate but it is unavoidable. There is no way anybody can come around and play with our country, to decide who is good, who is bad. We cannot accept that," Museveni said, adding that he “cannot tolerate this arrogance.”

Museveni, who has ruled Uganda since 1986, has alleged repeatedly that foreign groups are trying to meddle in Uganda's election, without providing evidence. He has accused his main challenger, the popular singer and opposition lawmaker known as Bobi Wine, of being “an agent of foreign interests.” Wine denies this.

The atmosphere in Uganda is increasingly charged ahead of voting. Police and military personnel now patrol the streets in parts of the capital, Kampala, and the military is in charge of all security operations in the Kampala metropolitan area.

Wine, who insisted Tuesday that his campaign is nonviolent, urged his supporters not to be intimidated by the security forces.

“The terror, frankly, is unprecedented,” said Kizza Besigye, a veteran opposition leader who challenged Museveni in four elections. “Violence, terror seem to be scaled up with every coming election. This election has witnessed untold violence. It gets worse and worse by the day.”

The army spokeswoman did not respond to a request for comment. The police spokesman was unavailable.

At least 54 people were killed in Kampala and other parts of the country in November as security forces put down riots provoked by the arrest of Wine for allegedly violating campaign regulations aimed at preventing the spread of the coronavirus.

Those deaths form a critical part of Wine’s petition to the International Criminal Court to investigate alleged acts of torture, mutilation and murder of civilian protesters by security forces.

The leading opposition candidates said they had launched a concerted effort to protect against vote-rigging at polling stations. They are urging their supporters to stay within 100 meters of polling stations rather than return home as the electoral commission is demanding. That means potential confrontations with security forces.

Ugandan authorities have asserted an urgent need to prevent the spread of the coronavirus in imposing restrictions on presidential candidates, including a ban on campaigns in Kampala and other urban areas.

Many among Wine’s campaign team are now in detention. Wine has been arrested many times and sometimes beaten in the past year for alleged offenses such as disobeying lawful orders. He has not been convicted of any charges.

Uganda's 76-year-old president has defied calls for his retirement, saying he has been elected many times by Ugandans who love him.

Ugandan polls are often marred by allegations of rigging. The country has never seen a peaceful transfer of power since independence from Britain in 1962.

As concerns rise, United Nations spokesman Stephane Dujarric told reporters Tuesday that Secretary-General Antonio Guterres "urges the Ugandan authorities, particularly the security forces, to act in a manner that respects international human rights standards, and he also encourages all political actors and their supporters to publicly commit to conduct their political activities peacefully and refrain from incitement to violence or hate speech.”