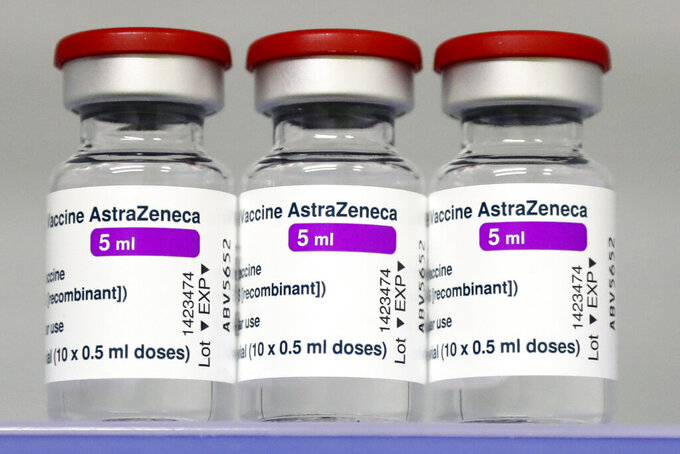 FILE - In this file photo dated Monday, March 22, 2021, vials of the AstraZeneca COVID-19 vaccine in a fridge at the local vaccine center in Ebersberg near Munich, Germany. German officials have decided to limit the use of AstraZeneca’s coronavirus vaccine in people under 60 after more unusual blood clots were reported in a small number of people who received the shots. Earlier this month, more than a dozen countries, including Germany, suspended their use of AstraZeneca over the blood clot issue. (AP Photo/Matthias Schrader, File)

LONDON (AP) — Britain’s medicines regulator is urging people to continue taking the AstraZeneca coronavirus vaccine, despite revealing that seven people in the U.K. have died from rare blood clots after getting the jab.

The Medicines and Healthcare Regulatory Agency, or MHRA, said it wasn't clear if the shots are causing the clots, and that its “rigorous review into the U.K. reports of rare and specific types of blood clots is ongoing.”

Though the agency said late Friday that seven people had died as a result of developing blood clots, it didn’t disclose any information about their ages or health conditions.

In total, MHRA said it had identified 30 cases of rare blood clot events out of 18.1 million AstraZeneca doses administered up to and including March 24. The risk associated with this type of blood clot is “very small,” it added.

“The benefits of COVID-19 vaccine AstraZeneca in preventing COVID-19 infection and its complications continue to outweigh any risks and the public should continue to get their vaccine when invited to do so,” said Dr. June Raine, the agency’s chief executive.

Concerns over the AstraZeneca vaccine have already prompted some countries including Canada, France, Germany and the Netherlands to restrict its use to older people.

The U.K., which has rolled out coronavirus vaccines faster than other European nations, is particularly reliant on the AstraZeneca vaccine, which was developed by scientists at the University of Oxford. It has also been using the vaccine developed by Pfizer-BioNTech, of which the agency has not seen any reported blood clot events.

Figures Saturday showed that the U.K. has given a first dose of vaccine to 31.4 million people, or around 46% of its population, a much higher rate than the rest of Europe. Delivering second doses is the priority for April, with 5.2 million people now having received two jabs.

The relative success of the country's vaccination program has been credited for helping to sharply reduce new coronavirus infections in the U.K. after a winter surge, paving the way for a modest easing of lockdown restrictions on gatherings.

On Saturday, the U.K. recorded another 3,423 infections, slightly up on the previous day's six-month low of 3,402. It also recorded only 10 coronavirus-related deaths, its lowest daily total since early September.

Despite the improved coronavirus backdrop, the U.K. has recorded Europe’s highest COVID-related death toll, with over 126,500 deaths.

In France, which has restricted use of the AstraZeneca vaccine to people over 55, the family of a 38-year-old woman who died after suffering post-vaccination blood clots in the brain filed a criminal complaint in Toulouse on Saturday seeking a manslaughter investigation.

She is among four people in France who died after suffering blood clots in the weeks after getting an AstraZeneca vaccine shot. France’s national medicine safety agency says it is investigating those cases and eight other cases of severe blood clotting in people who survived.

MHRA's view about the relative benefits of the vaccine is shared by the European Medicines Agency. It has said a causal link between unusual blood clots in people who have had the AstraZeneca vaccine is “not proven, but is possible," and that the benefits of the vaccine outweigh the risks of side effects. The World Health Organization has also urged countries to continue using the jab.

Adam Finn, a professor of pediatrics at the University of Bristol, said the “extreme rarity” of the blood-clotting events in the context of the millions of jabs administered in the U.K. makes the decision very straightforward.

“Receiving the vaccine is by far the safest choice in terms of minimizing individual risk of serious illness or death,” he said.