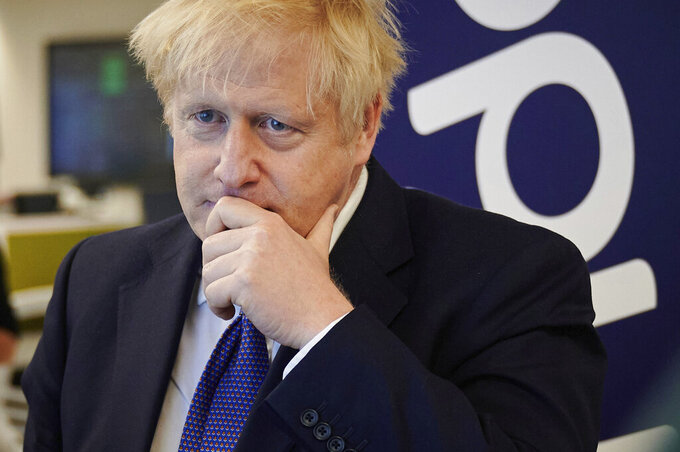 Britain's Prime Minister Boris Johnson visits the headquarters of Octopus Energy in London, Monday Oct. 5, 2020. They visited the startup company to promote the company's plan to create 1,000 new technology jobs across sites in London, Brighton, Warwick and Leicester, and a new tech hub in Manchester. (Leon Neal/Pool via AP)

LONDON (AP) — Prime Minister Boris Johnson pledged Tuesday that every home in Britain will be powered by wind energy in a decade as the government kick-starts a “green industrial revolution’’ that will create hundreds of thousands of jobs.

In a speech to the annual Conservative Party conference, Johnson said the government would invest 160 million pounds ($208 million) in ports and factories to support production of the next generation of wind turbines. That is a tiny fraction of what it will cost to reach his goal as the U.K. currently gets about one-sixth of its electricity from wind, or enough to power 18.1 million homes, according to statistics from renewableUK, an industry association.

“There is one area where we are progressing, quite literally, with gale force speed and that is the green economy — the green industrial revolution that in the next 10 years will create hundreds of thousands, if not millions, of jobs,” Johnson said in video address to the conference, which is being held online this year because of the COVID-19 pandemic.

Johnson’s comments come as he tries refocus the political debate away from the government’s widely criticized efforts to battle the pandemic. COVID-19 has killed more than 42,000 people in Britain, Europe’s highest death toll, and the government on Monday was forced to launch an investigation into how almost 16,000 new coronavirus infections went unreported as a result of a technical glitch.

The continuing crisis has pushed other initiatives off the agenda, but green issues remain part of Johnson's plans.

On Tuesday, he pledged to back a wide range of wind power projects, including “windmills that float on the sea,″ and sought to portray himself as a visionary.

“You heard me right,” he said. “Your kettle, your washing machine, your cooker, your heating, your plug-in electric vehicle — the whole lot of them will get their juice cleanly and without guilt from the breezes that blow around these islands.”