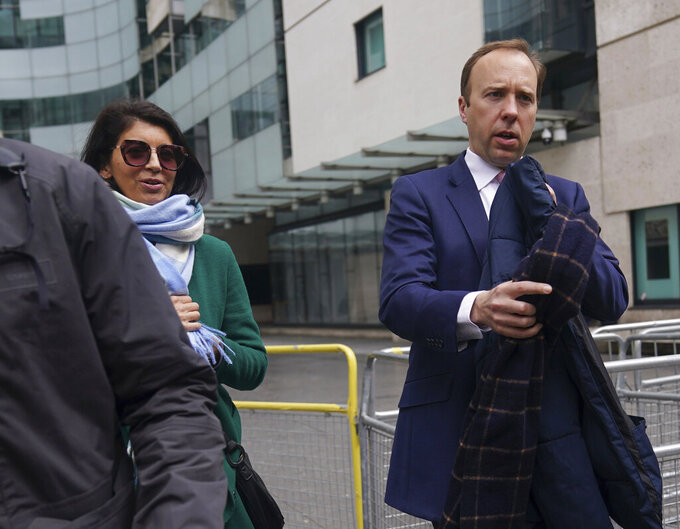 In this photo taken on May 16, 2021, Britain's Health Secretary Matt Hancock, right walks with aide Gina Coladangelo, outside BBC Broadcasting House in London after his appearance on the BBC1 current affairs programme, The Andrew Marr Show. Hancock has apologized for breaching social distancing rules after a newspaper ran pictures of him embracing a woman with whom he allegedly had an affair. Health Secretary Matt Hancock said in a statement that “I accept that I breached the social distancing guidance in these circumstances." He said “I have let people down and am very sorry.” The tabloid Sun newspaper reported Friday, June 25, 2021 that Hancock had an extramarital affair with a senior aide, Gina Coladangelo. (Yui Mok/PA via AP)

LONDON (AP) — Britain’s health minister apologized Friday for breaching national coronavirus restrictions after a newspaper ran pictures of him embracing a woman with whom he allegedly had an affair.

Health Secretary Matt Hancock, who has led the country’s response to the pandemic, is the latest in a string of British officials to be accused of breaching restrictions they imposed on the rest of the population to curb the spread of the coronavirus.

The tabloid Sun newspaper ran images appearing to show the married Hancock and a senior aide kissing in an office at the Department of Health. It said the closed circuit television images were taken May 6 — 11 days before lockdown rules were eased to allow hugs and other physical contact with people outside one’s own household.

Hancock said in a statement that “I accept that I breached the social distancing guidance in these circumstances."

“I have let people down and am very sorry,” he said. “I remain focused on working to get the country out of this pandemic, and would be grateful for privacy for my family on this personal matter.”

“If Matt Hancock has been secretly having a relationship with an adviser in his office — who he personally appointed to a taxpayer-funded role — it is a blatant abuse of power and a clear conflict of interest,” said Labour chairwoman Anneliese Dodds.

“His position is hopelessly untenable. Boris Johnson should sack him.”

“The prime minister has accepted the health secretary’s apology and considers the matter closed,” he said. “He and the rest of the government remain focused on continuing to tackle the pandemic.”

Davies said “the appointment followed all the correct procedures.” The aide was employed last year as an unpaid adviser and this year became a non-executive director at the Department of Health, a role that pays about 15,000 pounds ($21,000) a year.

Johnson’s Conservative government has been branded a “chumocracy” by critics for hiring special advisers and contractors from outside the civil service without long-customary levels of scrutiny.

Hancock’s department has been accused of waiving procurement rules to award lucrative contracts for protective equipment and other medical essentials, often to personal contacts. Hancock has said he was driven by the need to secure essential supplies quickly at the height of the outbreak.

Hancock has faced weeks of pressure since the prime minister's former top aide, Dominic Cummings, accused him of botching the government’s response to the pandemic. Cummings, now a bitter critic of the government he once served, told lawmakers last month that Hancock “should have been fired” for alleged lies and errors. He also published a WhatsApp message in which Johnson branded Hancock “totally (expletive) hopeless.”

Cummings himself was accused of breaking the rules and undermining the government’s “stay home” message when he drove 250 miles (400 kilometers) across England to his parents’ home during the spring 2020 lockdown. Johnson resisted pressure to fire him, but Cummings left his job in November amid a power struggle in the prime minister's office.