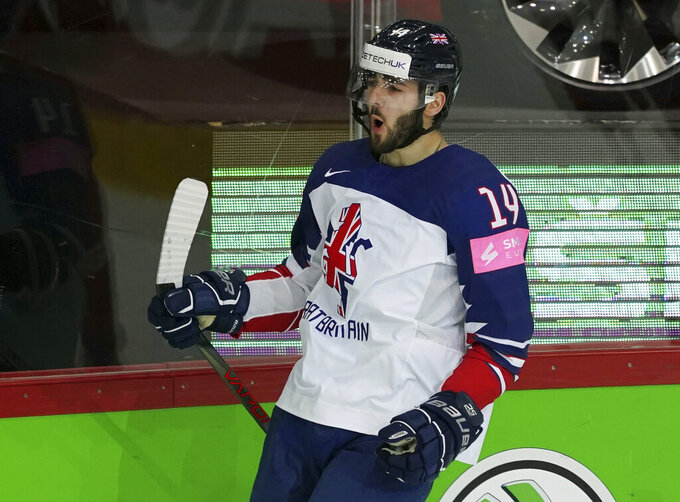 LONDON (AP) — The Arizona Coyotes and British forward Liam Kirk have agreed to terms on an entry-level contract three years after he became the first player born and trained in England to be drafted, his agent and Ice Hockey UK said Friday.

The 21-year-old Kirk was the joint top goalscorer at the recent world championship in Latvia, where he had seven goals in as many games for Britain.

“It has always been my dream to play in the NHL so to get this deal with the Coyotes is fantastic,” Kirk said in governing body Ice Hockey UK's announcement. “I am a step closer to that dream and I will continue to push myself to reach the elite level.”

Kirk's agent, Dan Milstein, tweeted that Kirk agreed to terms on a three-year entry-level deal. The Coyotes have yet to announce it.

The Coyotes selected the 6-foot left winger in the seventh round of the 2018 NHL draft, taking him with the 189th overall pick.

Kirk had 21 goals and 29 assists in 47 regular-season games for the Peterborough Petes in 2019-20. The OHL canceled the 2020-21 season because of the coronavirus pandemic. Kirk played briefly in Sweden and England this past season to prepare for the worlds.

Kirk, who attended the Coyotes' rookie and training camps in 2019, began his career with the Sheffield Steelers of Britain's Elite Ice Hockey League.