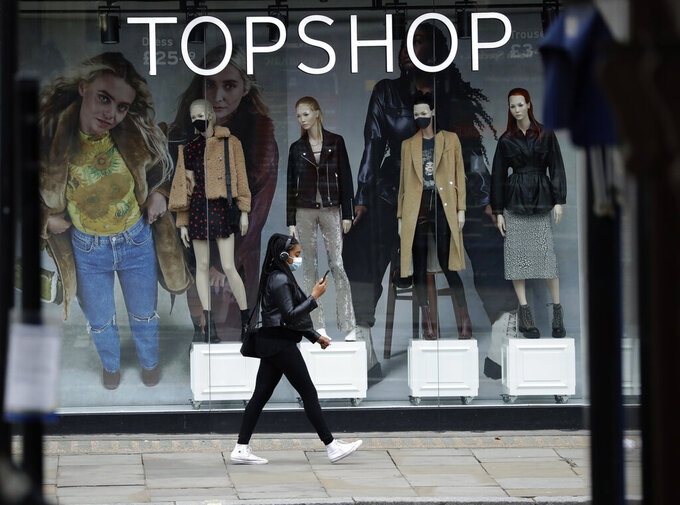 FILE - In this file photo dated Friday, Nov. 20, 2020, a woman wearing a face mask walks past mannequins wearing face masks in the window of a temporarily closed branch of the Topshop women's clothing chain in London. Online retail company ASOS, confirmed Monday Feb. 1, 2021, it has sealed the takeover of Topshop and three other brands from the collapse of the Arcadia retail empire, buying the brand names but not the high street retail space. (AP Photo/Matt Dunham, FILE)

LONDON (AP) — Online fashion seller Asos says it has bought Topshop, which once boasted designs by Kate Moss and Beyonce, along with three other brands for 265 million pounds ($363 million) as rivals scoop up bargains after the collapse of Britain’s Arcadia retail group.

The deal, announced Monday, puts thousands of jobs at risk because Asos acquired the Topshop, Topman, Miss Selfridge’s and HIIT brands but none of their stores.

Asos said it plans to keep only about 300 of the brands’ employees. In addition to the purchase price, Asos said it also planned an additional cost to build stock.

Arcadia, built by controversial retail tycoon Philip Green, went into bankruptcy on Nov. 30 as the COVID-19 pandemic closed stores and accelerated the shift to online shopping, compounding troubles for a group that was slow to embrace the internet.

Arcadia is arguably the biggest British retailing casualty of the pandemic. Others such as Debenhams, Edinburgh Woollen Mill and Oasis Warehouse also slid into insolvency after lockdown measures were first imposed last year.

Arcadia struggled to respond to increased competition from low-cost rivals like Primark, as well as from online disrupters such as Asos and Boohoo.

Boohoo, said last week it was in exclusive talks to buy three other Arcadia brands — Dorothy Perkins, Wallis and Burton — in a deal that also won’t include any stores.