Ukraine's 20 athletes expected to make it for Paralympics 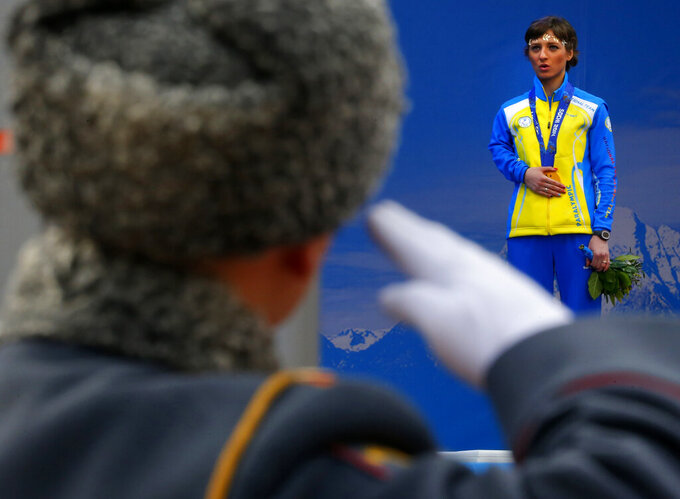 FILE - A Russian honor guard soldier salutes as Ukraine's Oleksandra Kononova covers her gold medal with her hand after winning the women's biathlon 12.5 km. standing event during a medal ceremony at the 2014 Winter Paralympic, Saturday, March 15, 2014, in Krasnaya Polyana, Russia. None of the 20 athletes from the Ukrainian Paralympic team have reached Beijing with the 2022 Paralympic Games opening at the end of the week, the International Paralympics Committee said Monday. (AP Photo/Dmitry Lovetsky, File)

Ukraine’s 20 athletes for the Winter Paralympics are expected to be in Beijing in time for Friday’s opening ceremony, IPC spokesman Craig Spence told The Associated Press on Tuesday.

Spence said the team was heading for the Chinese capital and could arrive as soon as Wednesday.

The arrival had been in doubt after Russia invaded Ukraine last week. The International Paralympic Committee board is to meet Wednesday and could put further sanctions on Russian athletes or expel them from the Paralympics.

Russian athletes are set to compete in Beijing as RPC, short for Russian Paralympic Committee, in fallout from a state-sponsored doping scandal and coverup dating to the 2014 Sochi Olympics.

Belarus is also expected to sanctioned by the IPC board for its part in the war. Belarusians could be forced to compete as neutral athletes in Beijing, as could Russia.

Russian athletes in last month's Winter Olympics competed as ROC, short for Russian Olympic Committee, because of the doping scandal.

The International Olympic Committee, which has repeatedly failed to forcefully punish Russia for its doping history, on Monday pushed dozens of sports governing bodies to exclude Russian athletes and officials from international events.

The IOC, which left the decision to others, said this action was needed to "protect the integrity of global sports competitions and for the safety of all the participants.”

The IOC also gave sports bodies a way around expulsion.

“Whenever this is not possible on short notice for organizational or legal reasons, the IOC ... strongly urges international sports federations and organizers of sports events worldwide to do everything in their power to ensure that no athlete or sports official from Russia or Belarus be allowed to take part under the name of Russia or Belarus,” the IOC said.

Russia is expected to have 71 athletes entered in the Paralympics. About 650 athletes from 49 delegations, including Ukraine, are expected for the Games.

The Winter Olympics in Beijing drew 2,900 athletes from 91 delegations. It closed on Feb. 20. The Paralympics end on March 13.