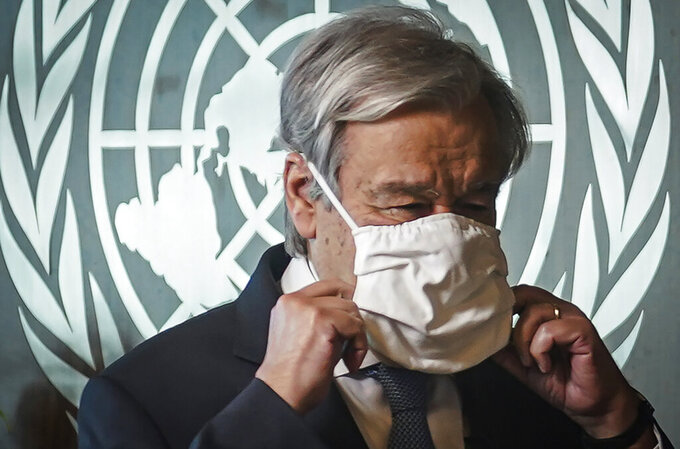 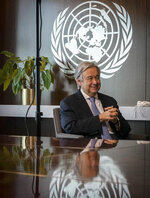 UNITED NATIONS (AP) — The U.N. chief finds it “very frustrating” that leaders of the 20 major industrialized nations didn’t come together in March and establish a coordinated response to suppress the coronavirus in all countries as he proposed.

Instead, they went their own ways as infections moved “every way, everywhere,” Secretary-General Antonio Guterres said. The result is that every country is taking its own sometimes “contradictory” actions, and the virus is moving “from east to west, north to south,” with second waves of COVID-19 now affecting many nations.

With a Group of 20 summit coming next month, Guterres said in an interview with the Associated Press that he hopes the international community now understands “they need to be much more coordinated in fighting the virus.”

He recalled the March meeting of the G20 where he urged adoption of a “wartime” plan, including a stimulus package “in the trillions of dollars” for businesses, workers and households in developing countries trying to tackle the pandemic and “a task force to have a combined effort to defeat the virus.”

At the virtual G20 summit on Nov. 21-22, he said, the United Nations will be “strongly advocating” for the need for better coordination and also seeking a “guarantee” that any coronavirus vaccine is treated as “a global public good” and be made "available and affordable for everyone, everywhere.”

Guterres said the international initiative to distribute coronavirus vaccines to countries worldwide, known as COVAX, now has 156 countries participating “but it is underfunded.”

The U.N. leader said all countries need to be brought together to understand the need “to adopt a vaccine with a common strategy” and “to advocate for a much stronger solidarity with the developing countries.”

There was “a massive mobilization of resources and a huge increase of liquidity in the developed world, and that was positive to avoid the worst in the economies of the global north,” he said, “but not the same has happened in the global south.”

In developing countries in the south, there is “a dramatic lack of liquidity” and problems of debt payments that have become more serious with “the risk of defaults that could be then in a cascade, and these would have devastating impacts in relation to the global economy,” he said.

“It’s time to have effective solidarity with the countries of the south,” Guterres said. “It’s time to make sure that we can come out of this with a recovery strategy that is sustainable, that is inclusive, and that at the same time addresses the biggest inequalities and injustices” facing the world.

The U.N. chief said tackling COVID-19 must top the global agenda and this year’s G20 summit.

“We need to be able to address the climate change threat with a much more effective way than we did with the COVID,” he said. “And for that we need to combine efforts for everybody to respect one common objective, to get to carbon neutrality in the middle of the century, in 2050.”

Guterres said that will be main U.N. objective in 2021 -- to create “a global coalition in which all countries, all companies, all cities in the world commit themselves to a transition to carbon neutrality, to have net zero emissions in 2050.”