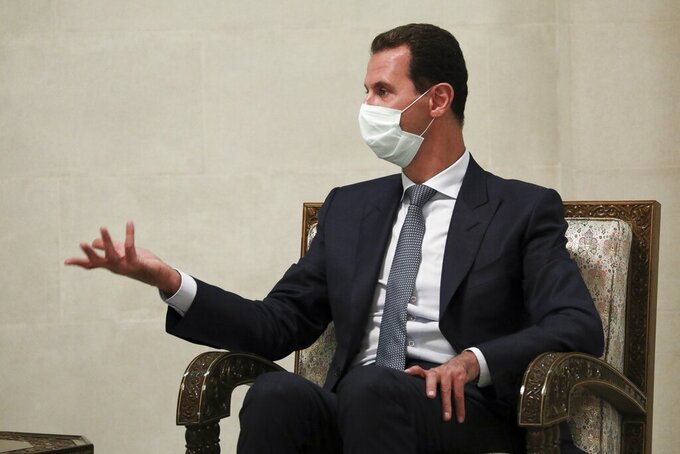 FILE - In this Monday, Sept. 7, 2020 file photo released by Russian Foreign Ministry Press Service, Syrian President Bashar al-Assad gestures while speaking to Russian Foreign Minister Sergey Lavrov during their talks in Damascus, Syria. U.N.-backed investigators in the 21st report from the Commission of Inquiry on Syria, pointed Tuesday, Sept. 15, 2020, to signs that Syria’s government continues to perpetrate rape, torture and murder as the country’s nine-year conflict grinds on, while citing possible war crimes by a Turkey-backed coalition of rebel groups and calling on Ankara to do more to help prevent them. (Russian Foreign Ministry Press Service via AP, File)

GENEVA (AP) — U.N.-backed investigators pointed Tuesday to signs that Syria’s government continues to perpetrate rape, torture and murder as the country’s nine-year conflict grinds on, while citing possible war crimes by a Turkey-backed coalition of rebel groups and calling on Ankara to do more to help prevent them.

The report from the Commission of Inquiry on Syria — its 21st — was based on some 538 interviews as well as documents, satellite imagery and other evidence. It covers the first half of 2020 at a time when a cease-fire between rebels and the government and its allies has largely held in the rebel-held Idlib region since March — a relative bright spot in an otherwise dismal situation.

But the commission noted how Syria faces new strains linked to the coronavirus pandemic, a currency and economic crisis, and stiff new sanctions by the United States on top of the war’s devastating toll over nearly a decade.

The panel urged an easing of sanctions that compound the impact of lags in humanitarian aid deliveries because of COVID-19, and urged countries to take back their nationals who are the children of militants from the Islamic State group and women held by the thousands in squalid camps.

The report cited “reasonable grounds” to believe that Syrian President Bashar Assad’s government has “continued to perpetrate the crimes against humanity of enforced disappearance, murder, torture, sexual violence and imprisonment.”

It also said possible war crimes, including hostage-taking, torture and rape, may have been committed by the so-called Syrian National Army, a coalition of Turkey-backed rebel groups that controls a broad swath of territory along the Turkish border. They have been at odds with the Kurdish-led Syrian Defense Forces, who are opposed by Turkey’s government, in the northeast.

The commission said it was, for example, investigating reports that at least 49 Kurdish and Yazidi women were detained in the Ra’s al-Ayn and Afrin regions by Syrian National Army members within the last year. It highlighted Turkey’s responsibility to “as far as possible, ensure public order and safety, and to afford special protection to women and children.”

In areas held by the Syrian Defense Forces, the commission noted worrying conditions in the camps deteriorated, with medical services “stripped down to skeletal levels due to COVID-19.”

“The dramatic increase in those suffering from food insecurity in Syria in the first half of 2020 is deeply concerning," said Karen Koning AbuZayd, one of the commission’s three members. “All barriers to the provision of humanitarian aid must be removed.”