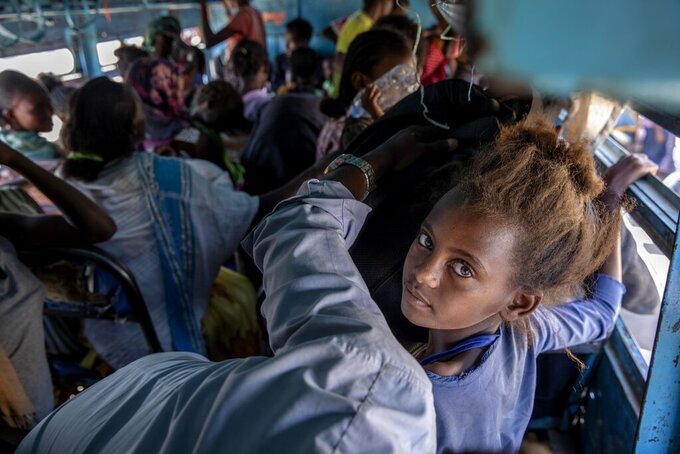 FILE - In this Dec. 1, 2020, file photo, refugees who fled the conflict in the Ethiopia's Tigray ride a bus going to the Village 8 temporary shelter, near the Sudan-Ethiopia border, in Hamdayet, eastern Sudan. In a remote part of neighboring Sudan, no coronavirus testing is taking place in the crowded camps that are now home to more than 45,000 Ethiopian refugees. People share shelters and stand close together in lines for food, cash and registration. There are few face masks to be seen. (AP Photo/Nariman El-Mofty, File)

A new U.N. report based on the first on-the-ground assessments confirms some of the grim concerns around Tigray’s some 6 million people since the conflict erupted Nov. 4 between Ethiopian forces and those of the Tigray region: Hospitals have been looted, even destroyed, and some fighting continues.

The crisis has threatened to destabilize one of Africa's most powerful and populous countries and to pull in neighbors like Sudan. Tigray leaders dominated Ethiopia’s government for nearly three decades before Prime Minister Abiy Ahmed came to power and sidelined them amid sweeping reforms that won him the Nobel Peace Prize.

Abiy has rejected international “interference” in the conflict even as the U.N. and others pleaded for weeks for unhindered access to Tigray as food, medicines and other supplies ran out.

Now COVID-19 has emerged as the latest source of alarm. “Only five out of 40 hospitals in Tigray are physically accessible,” the new U.N. report issued Thursday says. “Apart from those in (the Tigray capital) Mekele, the remaining hospitals are looted and many reportedly destroyed.” It does not say who did the looting.

COVID-19 surveillance and control work was interrupted for more than a month in Tigray, and that, along with the displacement of hundreds of thousands of people, “is feared to have facilitated massive community transmission of the pandemic,” the report says.

Ethiopia has one of the highest COVID-19 caseloads on the African continent with more than 127,000 confirmed infections. While its rate of daily cases has declined in recent weeks, officials have not said whether they have been receiving any data from the Tigray region.

“Health facilities outside of major cities are nonfunctional and those in the major cities are partially working with limited to no stock of supplies and absence of health workers,” the U.N. report says.

The report also says the Tigray region remains volatile. “Localized fighting and insecurity continues, with fighting reported in rural areas and in the peripheries of Mekele, Shiraro and Shire among other locations, as of last week,” it says.

The overall humanitarian situation is “dire,” the U.N. says, with food supplies “very limited” and widespread looting reported. “Only locally produced food items are available and at increasing prices, making basic goods unaffordable.” Most Tigray residents are subsistence farmers, and the conflict disrupted the harvest.

Two important camps hosting tens of thousands of refugees from nearby Eritrea remain unreachable — another source of alarm as the presence of Eritrean troops has been confirmed in Tigray.