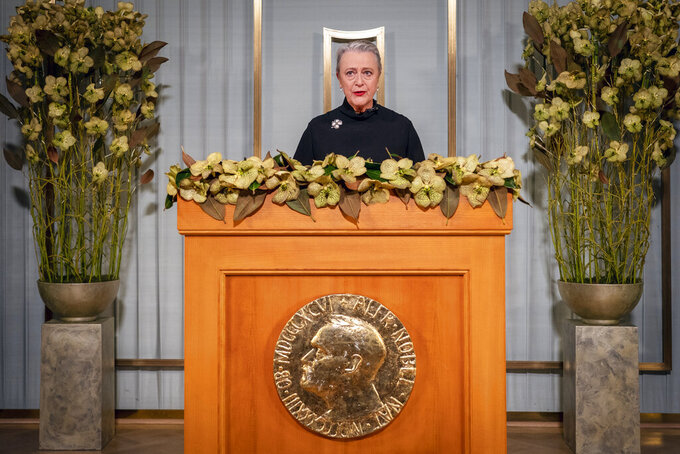 Nobel Committee chair Berit Reiss-Andersen makes a statement at the Nobel Institute as part of the digital award ceremony for this year's Peace Prize winner, the World Food Program (WFP), in Oslo, Norway, Thursday Dec. 10, 2020. Reiss-Andersen makes a statement in Oslo as part of the Nobel Peace Prize digital award ceremony and an acceptance speech will be made by WFP Executive Director David Beasley in Rome, Italy. (Heiko Junge / NTB via AP) 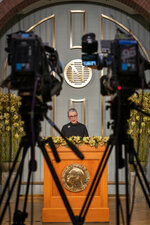 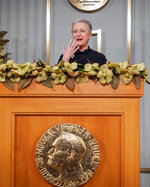 ROME (AP) — Calling food the “pathway to peace,” the head of the U.N. World Food Program on Thursday accepted the Nobel Peace Prize at the agency's headquarters in Rome, instead of in Oslo, Norway, in a break with pomp-filled tradition amid the COVID-19 pandemic.

WFP Executive Director David Beasley received the medal, which had been sent in a diplomatic pouch to Rome. He said the prize acknowledges "our work of using food to combat hunger, to mitigate against destabilization of nations” and create stability and peace.

Before Beasley received the medal and diploma from a gloved presenter, there were brief words from the head of the Norwegian Nobel Committee: "We are together, despite the distance forced upon us by the pandemic,” Berit Reiss-Andersen, said from Oslo.

Beasley said the prize is “more than a thank you. It is a call to action.”

“Because of so many wars, climate change, the widespread use of hunger as a political and military weapon, and a global health pandemic that makes all of that exponentially worse — 270 million people are marching toward starvation,” the WFP chief said.

Beasley noted the irony that after a century of “massive strides in eliminating extreme poverty” so many are on the brink of starvation.

Beasley added a plea: “Please don't ask us to choose who lives and who dies,” but, rather, “let's feed them all.”

He later told The Associated Press that “2021 is going to be catastrophic.”

“However, we can avert famine if we get the money and access we need. And the Nobel Peace Prize is going to give us the awareness,” Beasley said.

This year, 12 Nobel laureates were named across the six categories. All but the Peace Prize had been awarded over the past days at low-key ceremonies across Europe and the United States where the winners live.

A Nobel prize comes with a 10-milion krona ($1.1 million) cash award — to be shared in some cases — diplomas and gold medals.

Traditionally, the Nobel ceremonies are all held Dec. 10, the anniversary of the death of prize founder Albert Nobel in Stockholm, except for the Peace Prize that is held in Oslo, in neighboring Norway. Nobel wanted it that way, for reasons that he kept to himself.

The Norwegians at first had planned a scaled-down event with 100 guests instead of the traditional ceremony with roughly 1,000 guests. But in November the WFP and the Norwegian Nobel Committee said that an in-person award ceremony would not be held.

The Oslo-based committee added that depending on how the pandemic develops, Beasley could maybe give his Nobel lecture at the Oslo City Hall in 2021.

Later Thursday, in place of the traditional glitzy ceremony in Stockholm, a webcast event was held with members of the different prize-awarding institutions presenting the discoveries and achievements being awarded.

“A pandemic knows no borders," Nobel Foundation chairman Carl-Henrik Heldin said in his opening remarks. It meant, he said, that laureates couldn't travel to the Swedish capital to receive the prize. “Nevertheless, you will all be honored and celebrated here today in the City Hall.”

King Carl XVI Gustaf of Sweden, who traditionally would hand over the prizes, and Queen Silvia at his side, also appeared in a separate video, said the pandemic “has also shone a light on the important role of science.”

“While countries have been focused on closing their borders, scientists around the world have been working together like never before to understand the COVID-19 virus and to develop a vaccine,” the monarch said.

In between the speeches, there were brief videos with ceremonial presentations of the prize to the laureates. And framing the whole event were musical interludes with performances from City Hall.

“You are all heroes,” he said.