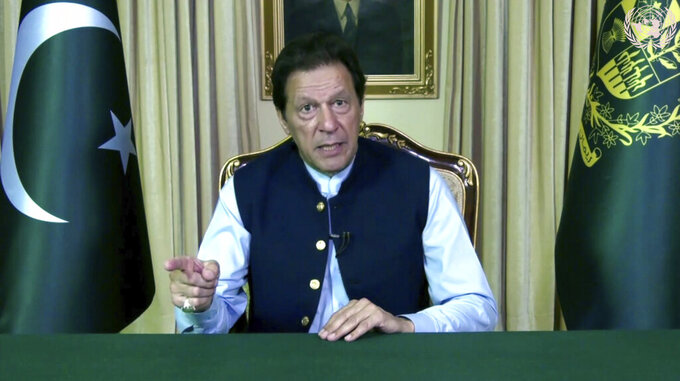 In this image made from UNTV video, Imran Khan, Prime Minister of Pakistan, speaks in a pre-recorded message which was played during the 75th session of the United Nations General Assembly, Friday, Sept. 25, 2020, at UN headquarters. (UNTV via AP) 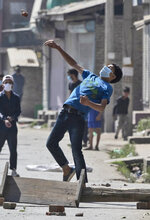 Khan said at the annual U.N. gathering of world leaders that Islamophobia rules India and threatens the nearly 200 million Muslims who live there.

“They believe that India is exclusive to Hindus and others are not equal citizens,” he said in a prerecorded speech to the U.N. General Assembly, which is being held virtually amid the coronavirus pandemic.

India responded by calling Khan's remarks “a new low” in diplomacy. “We saw lies, misinformation, warmongering and malice spread through this assembly,” Mijito Vinito, a diplomat with India's U.N. mission, said as the two countries traded barbed rebuttals in the assembly hall Friday night. Such exchanges between the two nuclear-armed neighbors have been common at recent U.N. General Assembly meetings.

Khan has frequently criticized the August 2019 decision by the government of Prime Minister Narendra Modi to strip Jammu and Kashmir’s statehood, scrap its separate constitution and remove inherited protections on land and jobs.

India’s action and a security clampdown that followed have sparked protests. U.N.-appointed independent experts have called on India to take urgent action.

Residents of the heavily militarized Indian-controlled region of Kashmir say security forces have arrested thousands of young men, raided people's homes, inflicted beatings and electric shocks, and threatened to take away and marry their female relatives. Thousands of protesters over the past five years have been wounded by shotgun pellets, including hundreds blinded in one or both eyes. For seven months, until March, the area was under a communications blackout, with social media and internet access banned.

“The international community must investigate these grave violations and prosecute the Indian civil and military personnel involved in state terrorism and serious crimes against humanity,” Khan said.

Vinito retorted later: “The leader of Pakistan today called for those who incite hate and violence to be outlawed. But, as he went on, we were left wondering, was he referring to himself?"

The larger Kashmir region is split between India and Pakistan, which have fought two wars over the territory. India accuses Pakistan of arming and training insurgents fighting for Kashmir’s independence from India. Pakistan denies the charge and says it offers only diplomatic and moral support to the rebels.

Khan, as he did in his speech before the world body last year, also condemned the targeting of Muslims in many countries. He noted provocations and incitement, such as the Quran being burned or offensive depictions of the Prophet Muhammad, that took place “in the name of free speech.”

Despite Khan's outcry at the treatment of Muslims worldwide, Pakistan has not criticized China’s assault on its Muslim minority Uighur population. China has been accused of incarcerating tens of thousands of Uighurs in so-called reeducation camps aimed at indoctrinating them in China’s communist ideology and away from their Islamic beliefs.

Pakistan’s silence, like that of other influential Muslim nations, is linked to its economic ties to China. Pakistan is heavily indebted to China, and the two countries have a long history of military cooperation. China has provided Pakistan with missiles capable of carrying nuclear warheads.

Khan also used his speech to call for debt relief for poor nations amid the pandemic.

He said COVID-19 illustrated that “no one is safe unless everyone is safe.” He said lockdown measures by richer countries have triggered a global recession that has hit poor countries the hardest. He touted his government's decision not to impose a wide-scale lockdown, which he said would have led to more people dying of hunger than the virus.

Pakistan, with a population of about 220 million, has recorded 6,444 COVID-19 deaths from around 309,000 infections since February.

Khan said a push by the Group of 20 leading rich and developing countries to suspend debt repayment of poorer nations and rapid finance efforts by the International Monetary Fund are not enough. He called for the creation of at least $500 billion in new special drawing rights for developing nations.

Modi is scheduled to address the General Assembly in prerecorded remarks tomorrow.

In a story Sept. 25 about Pakistani Prime Minister Imran Khan’s speech at the U.N. General Assembly, The Associated Press erroneously stated the time frame in which thousands of people were wounded by shotgun pellets in the Indian-controlled region of Kashmir. Thousands of people have been wounded over the past five years, not the past year.