Unbeaten Badgers have no margin for error in Big Ten race 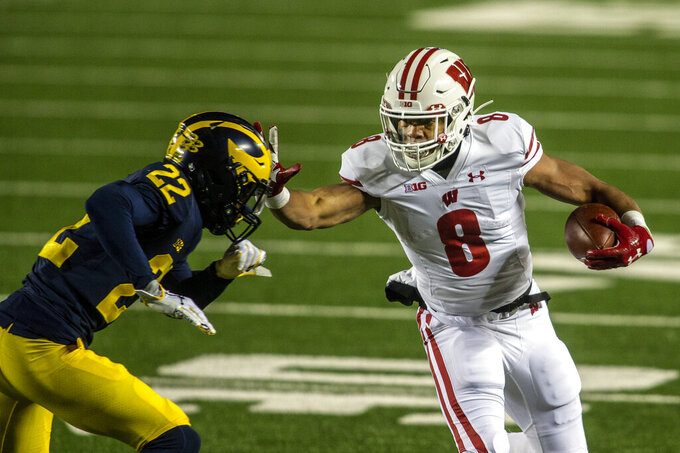 No. 10 Wisconsin is walking a fine line on its path to a potential second straight appearance in the Big Ten championship game.

After a flurry of COVID-19 cases caused the Badgers to scrap games with Nebraska and Purdue, Wisconsin likely can’t afford any more cancellations to remain eligible for the Big Ten title. That means avoiding another outbreak and hoping future opponents do not have similar issues the week they’re scheduled to face the Badgers.

“We can control what we can control here to make sure it doesn’t happen again,” offensive tackle Cole Van Lanen said. “We can’t control if another team has the same thing we had. It’s 2020. It’s unpredictable. It is what it is. We’re just focused on winning football games right now.”

Wisconsin’s shortened season could have a memorable finish if the pandemic doesn’t interfere again.

The Badgers have outscored their first two opponents 94-18. They opened with a 45-7 triumph over Illinois before the COVID-19 outbreak caused them to sit out the next two weekends.

“Nothing’s worse than watching other guys play and you’re sitting on your couch,” tight end Jake Ferguson said. “I was texting guys on the team like, ‘Dude we should be out there playing right now,’ and, ‘This is eating me alive.’ “

Rather than showing signs of rust in their return to action, the Badgers demonstrated in a 49-11 blowout at Michigan how much they appreciated the opportunity to play again.

“It was good for us to just get back to playing,” coach Paul Chryst said.

Wisconsin (2-0) visits No. 19 Northwestern (4-0) on Saturday with the Big Ten West Division lead at stake.

Under normal circumstances, a matchup of unbeaten divisional rivals in late November almost certainly would decide which team gets to play for the conference title. But this season is anything but typical.

The Big Ten requires teams to play at least six games to be eligible for its Dec. 19 championship game. Wisconsin has just four games remaining on its schedule before that, leaving the Badgers no margin for error.

For instance, if Minnesota suddenly faced a COVID-19 outbreak that forced the Gophers to call off their trip to Wisconsin next week, the Badgers could be left out of the conference championship game even if they went undefeated.

“For us it’s taking it day by day and week by week and really controlling our end of it and knowing other teams are doing the same,” quarterback Graham Mertz said. “No one wants to miss games. No one wants to have half their team go down with COVID. It’s pretty much the world we live in today.”

Mertz was one of the Wisconsin players who tested positive last month. Wisconsin was up to 27 active cases involving 15 players and 12 staffers on Nov. 3 when it called off that weekend’s game with Purdue. Once those case numbers dropped substantially, Wisconsin got back on the field and showed its considerable promise.

Mertz has thrown seven touchdown passes without an interception and ranks fifth among all Bowl Subdivision players in passer rating. Ferguson already has four touchdown catches. Wisconsin leads the nation in scoring defense and total defense.

“One thing that I’ve really thought was very impressive from our team is just how confident we are, and how confident we were even during that two-week stretch,” linebacker Jack Sanborn said. “We’ve obviously gotten a chance to become closer. Any time adversity comes like missing two weeks like we did, it kind of galvanizes your team a little bit and brings the guys together.”

The Badgers believe they’re good enough to win a Big Ten title. Now they just need to make sure they stay healthy enough to prove it.