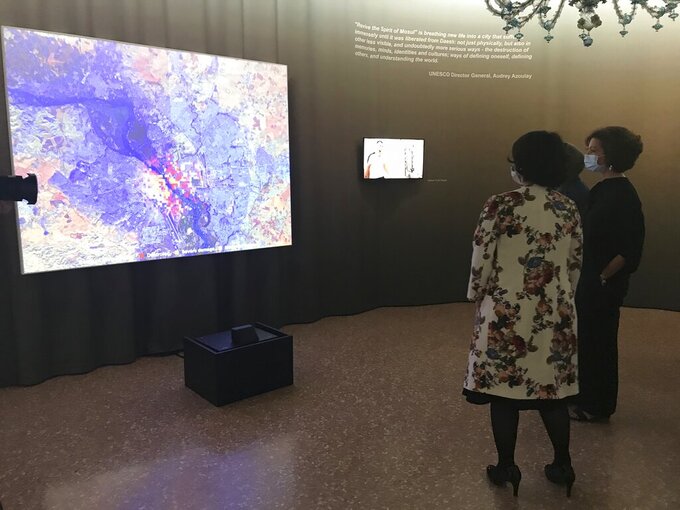 Audrey Azoulay, UNESCO's director general, right, attends the exhibition " Revive the Spirit of Mosul ", in Venice, Italy Friday, May 21, 2021. The United Nations’ cultural agency has opened an exhibit detailing plans to rebuild the Iraqi city of Mosul that underlines the role of architecture in helping heal wounds. The exhibit is on the sidelines of the 17th International Architecture Exhibition that opened after a one-year pandemic delay Saturday for a six-month run under the title: “How will we live together?” (UNESCO via AP)

VENICE, Italy (AP) — The United Nations’ cultural agency has opened an exhibit detailing plans to restore multicultural landmarks in the Iraqi city of Mosul, underlining the role of architecture in helping heal wounds.

The exhibit, “Revive the Spirit of Mosul,” is being on the sidelines of the 17th International Architecture Exhibition, which opened Saturday after a one-year pandemic delay under the title: “How will we live together?”

The Venice Biennale’s central question resonates in particular in Iraq, which is experiencing turbulent change, and the old city of Mosul, where 80% of the city’s monuments were destroyed by extremists during the city’s 36-month occupation by the Islamic State group.

Iraq is one of three countries participating for the first time at the Biennale, with an exhibit by Rashad Salim titled “Ark Re-Imagined” that is an artistic examination of the impact of the great flood in ancient Mesopotamia.

The UNESCO exhibit, in the Zorzi Palace where the agency’s regional offices are houses, unveils the winning project for restoring the Al-Nouri Mosque, built in the 12th century and once famous for its leaning minaret. IS leader Abut Bakr al-Baghdadi declared an Islamic caliphate from the mosque in 2014, and IS extremists blew it up as Iraqi forces closed in in 2017.

“Healing wounds means rebuilding the city and its historic fabric. It also means reviving the spirit of Mosul, through heritage, culture and education,’’ UNESCO Director-General Audrey Azoulay said in an speech opening the exhibit on Friday. “The spirit of Mosul is, first and foremost, reflected in the diversity of its communities, which had lived together peacefully for centuries.”

An international jury last month chose a project by Egyptian architects led by Salah El Din Samir Hareedy to rebuild the mosque, part of a UNESCO project that will also rebuild the Al-Habda minaret and the churches of Al-Tahera and Al-Saa’a.

The new Al-Nouri Mosque will be nearly identical to the old one to the casual eye, while the prayer hall will contain more natural light and enlarged areas for women and VIPs. The winning project also aims to enhance the role of the mosque’s central courtyard as an urban hub for the old city.

Work to stabilize the sites began in 2020. Local communities have indicated a preference to restore the Al-Habda minaret as it was before the IS occupation, UNESCO officials said, while designs for the two churches have not yet been chosen.

UNESCO’s $50 million project to revive Mosul was announced in 2018 and is funded by the United Arab Emirates. It also aims to revive the cultural life and diversity of a city that for thousands of years was a commercial, intellectual and cultural crossroads. UNESCO is also rehabilitating historic houses in the old city with European Union support.