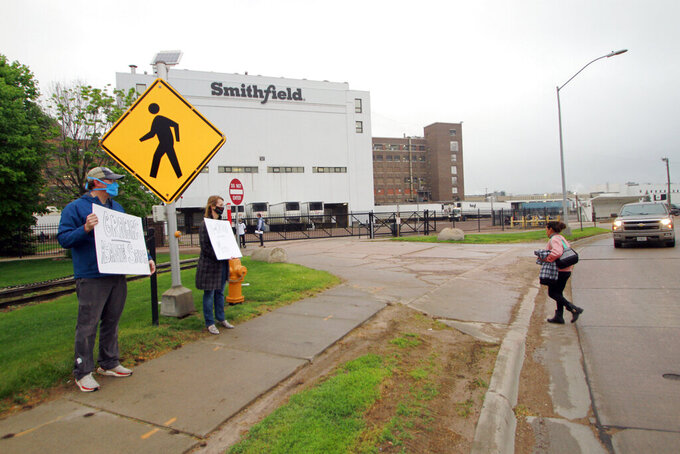 FILE - In this May 20, 2020, file photo, residents cheer and hold thank you signs to greet employees of a Smithfield pork processing plant as they begin their shift in Sioux Falls, S.D. Workers at the South Dakota meatpacking plant that became a coronavirus hotspot last year are considering a strike after contract negotiations between Smithfield Foods and the union have stalled, the union said Wednesday, June 2, 2021. (AP Photo/Stephen Groves, File)

SIOUX FALLS, S.D. (AP) — The union at a Smithfield Foods pork processing plant in South Dakota engaged in contract negotiations Tuesday armed with the authorization to call a strike.

A strike authorization at the Sioux Falls chapter of the United Food and Commercial Workers Union was overwhelmingly approved late Monday with 98% of the vote total, the union said. However, union leaders said they hope to avoid a work stoppage as they met with company representatives Tuesday.

Meatpacking workers have become emboldened after a virus outbreak at the plant last year killed four workers and infected nearly 1,300. The union is demanding that Smithfield boost its wage offerings in a four-year contract to match those at a JBS pork plant in the region, as well as make several other concessions on break times and employee health insurance costs.

“We’re not going to change our stand,” said B.J. Motley, the president of the local union.

Smithfield Foods, which is based in Virginia, has said its initial offer, which was rejected by the union last week, is in “full alignment” with agreements that UFCW has already accepted at other plants.

A strike at the plant, which produces roughly 5% of the nation's pork supply every day, could create ripple effects from hog farmers to supermarket shelves. When the plant shuttered in April 2020 alongside others experiencing virus outbreaks, it highlighted the vulnerability of the meat supply chain. Major meatpacking companies convinced former President Donald Trump to declare them essential to national security.

Smithfield, like other large meatpacking companies, spent millions of dollars to incentivize workers and outfit plants with plexiglass safety barriers. It has pointed out that after the plant reopened, large outbreaks were avoided.

Mark Lauritsen, the UFCW’s national vice president of meatpacking, said pay has increased significantly throughout the industry since the pandemic began. Last spring, the meat companies generally offered some temporary form of additional pay for workers while the coronavirus spread quickly through meatpacking plants.

Most companies made those pay increases permanent last year, giving most workers a couple more dollars per hour, Lauritsen said. Then additional pay raises have been negotiated as contracts expired over the past year.

Lauritsen said the base rate of pay at most pork plants is now up to $19 an hour — an increase of about $3.60 from before the pandemic.

“We’re finally in a place where these workers are getting the raises they deserved for years,” he said.

The union wants Smithfield to match the starting rate of $19 an hour offered at a JBS pork plant 70 miles (110 kilometers) away in Worthington, Minnesota. Workers have said those wages, as well as a sudden boost in pay at fast-food chains or retail stores, have drawn employees away from the Smithfield plant and forced those left behind to work harder and longer.

Smithfield Foods did not immediately respond to a request for comment Tuesday.

Motley did not offer a deadline for when a strike could happen, but said the union would wait until Smithfield makes a final contract offer.

Besides Sioux Falls, Smithfield is also in contract talks with the union at large plants in Crete, Nebraska and Tar Heel, North Carolina.