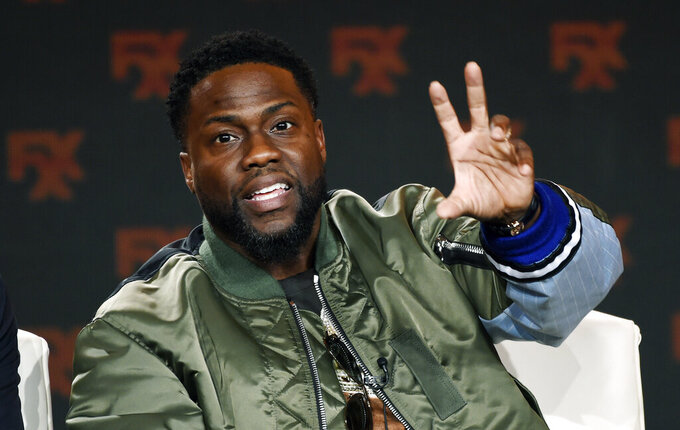 FILE - In this Jan. 9, 2020 file photo shows Kevin Hart during an interview in Pasadena, Calif. Hart offered a walk-on role in a future film to a health-care worker in the COVID-19 fight. New Jersey anesthesiologist Henry Law, was randomly selected as the winner in an All In Challenge contest. The challenge raises money for organizations that are feeding the hungry during the coronavirus pandemic. (AP Photo/Chris Pizzello, File)

PHILADELPHIA (AP) — Kevin Hart found an upside to putting his name to a charitable cause during the coronavirus pandemic: the comedian offered a walk-on role in a future film to a health-care worker in the COVID-19 fight.

Henry Law, an anesthesiologist in New Jersey, got the call from Hart (“Jumanji”) that he had been randomly selected as the winner in an All In Challenge contest. The challenge was launched by Michael Rubin, the founder of the online retailer Fanatics.

The challenge raises money for organizations that are feeding the hungry during the pandemic, including Meals on Wheels, No Kid Hungry, America’s Food Fund, World Central Kitchen and Feeding America. Most of the blockbuster prizes offered involve bank-busting bids to share experiences with A-list celebrities and athletes.

Law said he donated “a few hundred dollars” for a shot to win a speaking part, a trailer, assistant, car service, wardrobe and a stay in a five-star hotel for a future Hart movie.

Law said he was told he was a finalist in the contest until he got a FaceTime call from Hart with the shocker that he had actually won -- with Hart joking the prize winner could be the next Macaulay Culkin.

There was a minimum $10 bid to compete for the Hart prize and there were more than 10 million entries.

Before Law gets ready for his close-up, he’s had to see first-hand the devastating effects of COVID-19 in his job in the Jefferson Health care system. Law rotates among the New Jersey campuses in Cherry Hill, Washington Township and Stratford.

“As an anesthesiologist, we’re right there with the patient,” Law said by phone. “If they need a breathing tube placed, that’s usually when it’s most dangerous to catch virus particles. That was a great concern in the beginning. But over time, we started to get more PPE. Right now, I think we’re pretty good in that standpoint. Still seeing a good number of patients coming through.”

Law is a huge Sixers fan, of which Rubin has an ownership stake. He has remained isolated from his parents, both over 70, and his 96-year-old grandmother during the crisis.

“Even though there’s still lot of tragedy going on, we’re getting better at dealing with it,” Law said.

The All In Challenge has offered more than 400 prizes and raised nearly $43 million over the last four weeks.