US adds cameras at Mexico border despite drop in crossings 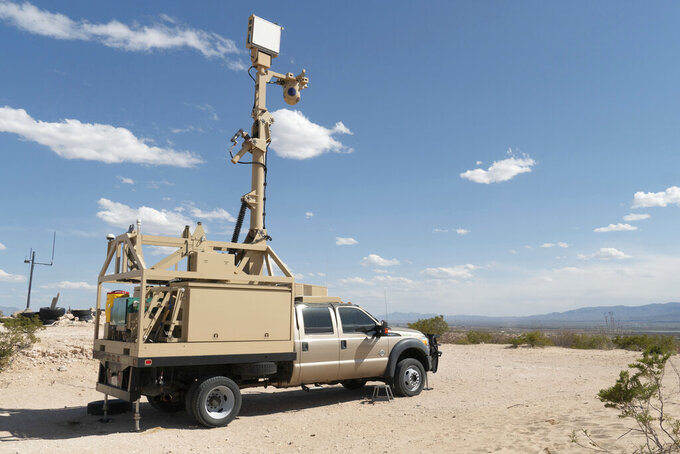 In this April 4, 2019 photo, provided by the U.S. Army, a mobile surveillance camera system is stationed near the Fort Hancock Border Patrol Station at Fort Hancock, Texas. The Trump administration has been quietly adding military surveillance cameras at the U.S.-Mexico border in response to the novel coronavirus pandemic despite the fact fewer people appear to be crossing illegally. Documents obtained by The Associated Press show the Department of Defense at the request of the Department of Homeland Security sent 60 mobile surveillance cameras in addition to 540 more troops to the southwest border this month. (Sgt. Brandon Banzhaf/U.S. Army via AP)

Documents obtained by The Associated Press show the Department of Defense, at the request of the Department of Homeland Security, started manning 60 more mobile surveillance cameras this month after deploying 540 additional troops to the southwest border. The documents are unclassified but for official use only and were part of PowerPoint slides created last week to brief Lt. Gen. Laura J. Richardson, commander of U.S. Army North, the primary unit overseeing military operations at the border.

The reason for the additional cameras was not “based on border flow numbers" but on rising coronavirus cases in Mexico, he said.

“Each person that avoids arrest and makes further entry into the United States has the potential to be carrying the COVID-19 virus and puts American lives at risk," Dyman said in a email.

Apprehensions of people crossing illegally have declined by 77% since a peak in May, according to Customs and Border Protection. April figures have not been released yet but are expected to be even lower.

The cameras were set up days before President Donald Trump signed an executive order Wednesday placing a 60-day pause on issuing green cards in an effort to limit competition for jobs in a U.S. economy wrecked by the coronavirus.

Trump has used emergency powers during the pandemic to implement an aggressive border crackdown that has included turning away or immediately deporting asylum-seekers, including minors.

The military help means more Border Patrol agents can focus on apprehending people who cross illegally or expelling foreigners under a rarely used public health law that the Trump administration tapped amid the pandemic, Dyman said.

The addition of the mobile cameras, which are are mounted in the back of trucks, bring the total to at least 192, according to the documents.

Southern border expert David Shirk sees no justification for adding cameras and troops. He pointed out that Mexico so far has a fraction of the number of COVID-19 cases that have been confirmed in the United States, while deportees flown back from the U.S. have introduced cases in their home countries.

The government's own numbers show the opposite. Apprehensions at the U.S.-Mexico border have been declining for nine straight months.

As of Sunday, the 60 added mobile surveillance cameras planned to be manned and operational, according to the documents. That day, the six Mexican states bordering the U.S. reported a total of about 125 confirmed COVID-19 cases, according to Mexico's health secretary. By comparison, the four U.S. states that border Mexico — California, Arizona, New Mexico and Texas — recorded about 55,000 infections Sunday.

Pentagon officials as recently as August were considering a request from the Department of Homeland Security to send reconnaissance planes and military drones designed for battlegrounds in Afghanistan and Iraq to the border.

Administration officials have declined to say whether that plan, first reported by Newsweek on Aug. 9, is still in the works. In December, Richardson, the U.S. Army North commander, ordered historically unclassified documents and daily briefings on the U.S.-Mexico border to be moved to a classified system to prevent further leaks.

With the additional troops, about 3,000 active-duty service members are on the border along with 2,500 National Guard troops. Barred from law enforcement duties, they have kept a low profile, doing on-the-ground surveillance among other things.

The border mission — marking one of the longest deployments of active-duty troops to the border in U.S. history — has cost more than $500 million since October 2017. The Defense Department also has reallocated nearly $10 billion to building Trump's border wall.

“The U.S. border is the most militarized peacetime border in the world, and the border is more militarized today than it ever was in the entire history of our two countries," said Shirk, the professor. “I think the administration is clearly exploiting a crisis to try to advance its ulterior domestic policy objective of restricting immigration."

Trump uses the monthly border tallies on apprehensions as a benchmark to determine how his policies are working, and that’s become particularly important in an election year. The number of people crossing the border traditionally declines when it’s hot outside, and the winter months often see increases.

That coincided with the U.S. expelling more than 10,000 Mexican and Central American asylum-seekers under public health rules that the administration quietly began using March 20 — the same day Trump announced the southern border was closed to nonessential travel.

The head of the Centers for Disease Control and Prevention, Dr. Robert Redfield, on Monday extended the rules largely shutting down the asylum system until May 20. His order described a “serious danger” of COVID-19 being introduced at Border Patrol stations and ports of entry as well as further into the country.

At least 272 Customs and Border Protection employees have tested positive for the virus, including 62 in states bordering Mexico.

Redfield also noted that many places on the U.S. side of the border have not yet experienced widespread community transmission of the virus and therefore the pandemic in Canada and Mexico remain “a serious danger to such locations." That's despite the U.S. having the most cases in the world by far.

The Department of Homeland Security requested the latest military help under the Economy Act, which allows federal agencies to order goods and services from other federal agencies.

Congress passed the law in 1932 to eliminate overlapping activities of the federal government. It has been abused, so conditions have been added, including a requirement that the requesting agency demonstrate that its request meets a bona fide need that either exists or is arising within the fiscal year.

This story corrects that the cameras are owned by Customs and Border Protection, not defense department.