US agency says women can get abortion pill via mail 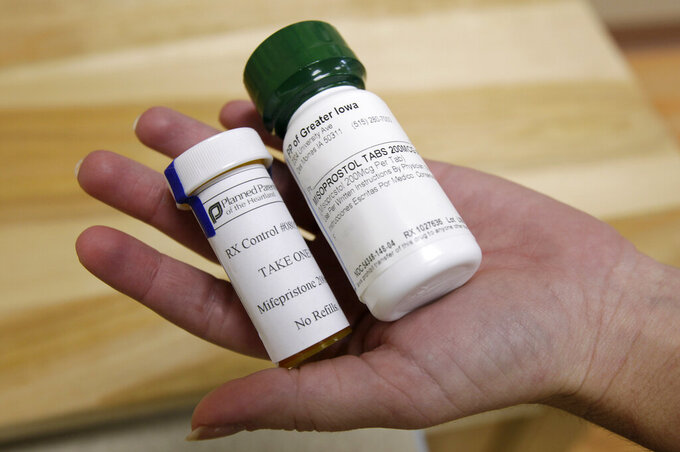 FILE - This Sept. 22, 2010 file photo shows bottles of the abortion-inducing drug RU-486 at a clinic in Des Moines, Iowa. On Tuesday, April 13, 2021, the acting head of the Food and Drug Administration said women seeking an abortion pill will not be required to visit a doctor's office or clinic during the COVID-19 pandemic, in the latest reversal in ongoing legal battles over use of the medication. (AP Photo/Charlie Neibergall)

WASHINGTON (AP) — Women seeking an abortion pill will not be required to visit a doctor's office or clinic during the COVID-19 pandemic, U.S. health officials said Tuesday in the latest reversal in an ongoing legal battle over the medication.

The Food and Drug Administration announced the policy change a day earlier in a letter to the American College of Obstetricians and Gynecologists, one of several medical groups that has sued over the restriction put in place under the Trump administration.

The FDA’s acting head, Dr. Janet Woodcock, said an agency review of recent studies “do not appear to show increases in serious safety concerns,” when women take the pill without first visiting a health facility and discussing the drug's potential risks, including internal bleeding.

The change clears the way for women to get a prescription for the pill — mifepristone — via telemedicine and receive it through the mail. However, abortion opponents are pushing legislation in several Republican-led states that would head off easier access.

Medication abortion has been available in the United States since 2000, when the FDA approved the use of mifepristone. Taken with a hormone blocker called misoprostol, it constitutes the so-called abortion pill. About 40% of all abortions in the U.S. are now done through medication — rather than surgery — and that option has become more pivotal during the COVID-19 pandemic.

Last year, the FDA waived in-person requirements for virtually all medications, including tightly controlled drugs such as methadone. But the FDA and its parent health agency argued the rules were necessary to ensure the pills were used safely. The rule requires patients to pick up the single tablet of mifepristone at a hospital, clinic or medical office and sign a form that includes information about the medication’s potential risks.

The obstetricians and gynecologists group sued to overturn the rule, setting off a series of conflicting court decisions. Most recently, in January, the Supreme Court sided with the Trump administration to reinstate the longstanding rule on getting the drug in person.

The obstetricians group said in a statement Tuesday the FDA's about-face on the requirement shows “it is arbitrary and does nothing to bolster the safety of an already-safe medicine.”

The move was also hailed by congressional Democrats, some of whom had called on FDA to reverse its policy in a February letter.

But abortion opponents said the move would jeopardize women's health.

“With this action, the Biden administration has made it clear that they will prioritize abortion over women’s safety,” said Jeanne Mancini, president of the anti-abortion group March for Life. “Chemical abortions should have more medical oversight, not less.”

The FDA policy only applies during the COVID-19 health emergency. The obstetricians and gynecologists group and several other medical organizations are pushing to make medication abortion permanently available via online prescribing and mail-order pharmacies.