US to ASEAN: Reconsider deals with blacklisted China firms 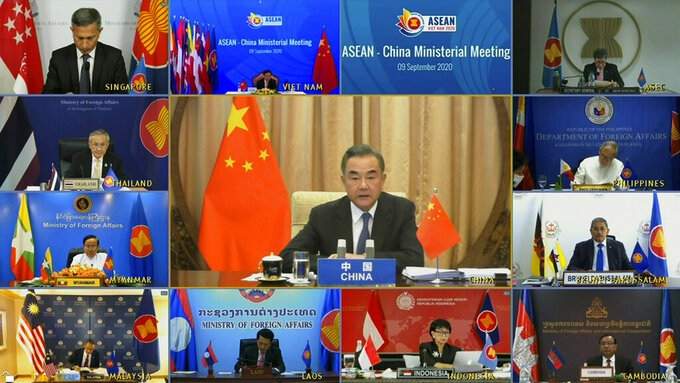 In this image taken from video provided by VTV, Chinese Foreign Minister Wang Yi speaks during an online meeting with ASEAN foreign ministers on Wednesday, Sept. 9, 2020. Southeast Asia’s top diplomats held their annual talks by video Wednesday to discuss the immense crisis wrought by the coronavirus pandemic and rising tensions in the South China Sea amid the escalating rivalry between Washington and Beijing. (VTV via AP)

Pompeo spoke with counterparts from the Association of Southeast Asian Nations in an annual conference by video due to the coronavirus pandemic. Four of the members — the Philippines, Vietnam, Malaysia and Brunei — have been locked in the long-raging territorial conflict with China, along with Taiwan, over the busy waterway, which Beijing claims almost in its entirety.

Although the U.S. lays no claim to the South China Sea, the Trump administration has recently imposed sanctions on Chinese officials responsible for Beijing’s military buildup in the area. It includes airfields and radar and missile stations on islands constructed atop coral reefs, raising fears China may interfere with freedom of navigation in international waters.

“I think keep going, don’t just speak up but act,” Pompeo told top diplomats from the 10-nation bloc, without elaborating. A State Department spokeswoman said he pressed for a peaceful resolution of the disputes.

China does not respect democratic values and principles of sovereignty, quality and territorial integrity enshrined in the ASEAN charter, Pompeo said. He cited the U.S. blacklisting of about two dozen Chinese companies for their roles in constructing artificial islands in the disputed waters that infringe on other states’ claims.

“Don’t let the Chinese Communist Party walk over us and our people. You should have confidence and the American will be here in friendship to help you,” he said.

It’s not clear how many ASEAN members have dealings with the Chinese construction companies blacklisted by the U.S. Commerce Department. But Philippine President Rodrigo Duterte’s administration said last week it would not follow the U.S. move and will allow one of the blacklisted firms or its subsidiary to partner with a local company for an airport project in Cavite province south of Manila.

The U.S. has challenged China's sweeping territorial claims by deploying warships and fighter jets for what it calls freedom of navigation and overflight patrols in the disputed waters.

There was no immediate comment from China or its foreign minister, Wang Yi, who was participating in the ASEAN meetings and separately met the group’s ministers Wednesday. China has insisted it has right to safeguard its national interests and accuses Washington of interfering in regional affairs.

Vietnamese Foreign Minister Pham Binh Minh, whose country is hosting ASEAN meetings this year, warmed up to Pompeo’s remarks, saying “the ASEAN-U.S. relationship has brought about mutual benefit to both sides.”

“The U.S. role and contribution to maintaining peace, stability and security in the region are encouraged,” he said.

ASEAN, founded in 1967, has struggled to stay away from the escalating rivalry between Washington and Beijing. It has often asserted its “centrality” and regional leadership although some critics dismiss the group as a talk shop that is often vulnerable to the sway of world powers.

Depending on how ASEAN deals with issues, “they can either result in disaster or a new dawn of peace and stability for our region,” Malaysian Foreign Minister Hishammuddin Hussein told colleagues on Tuesday.

“The challenge here is leadership – do we lead or do we follow?” he asked. “Make no mistake — Southeast Asia intends to remain the master of its own destiny.”