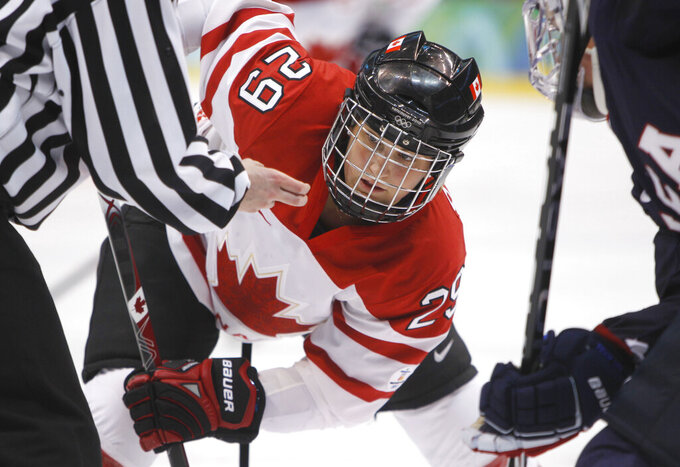 FILE - Canada's forward Marie-Philip Poulin (29) waits for the puck to drop in the first period of the women's gold medal ice hockey game against the United States at the Vancouver 2010 Olympics in Vancouver, British Columbia, Feb. 25, 2010. Poulin has been nicknamed `Captain Clutch' for an ability to score decisive goals on the world's biggest stage. (AP Photo/Gene J. Puskar, File)

BEIJING (AP) — The last thing Cammi Granato and her U.S. women’s hockey teammates needed to see after a 10-hour bus ride through the Maritimes was arriving at their hotel and finding the Canadians staying at the same place.

It was bad enough the two heated rivals had to confront each other on ice. In those early days — the late 1990s and 2000s — of what’s developed into one of the world’s fiercest rivalries, the two sides were ready to drop their gloves when and where ever.

“We’d have like a four-game tour through say, Nova Scotia, and you’re on the bus and get to the hotel, same hotel as Canada, and we just played them the night before,” Granato recalled. “The elevator door opens and there’s five Canadians in it, and they’re looking at you like `You’re not getting on this elevator. And if you do, you’re not going to be very happy.'”

Granato, the first women inducted into the Hockey Hall of Fame and captain of the first women’s team to win a hockey gold medal at the 1998 Nagano Olympics, laughs at the memory now. And yet, hate is not too strong of a word to describe the steam-hot grudge the two teams had developed for each other.

“Oh, it was real. It was a real hate,” Granato said. “That’s the team that is always standing in your way of what you want.”

Gold has always been the goal, with the next chapter of U.S. versus Canada beginning Tuesday when they meet in a Group A preliminary round game at the Beijing Olympics.

The Americans enter the tournament as defending champions after ending Canada’s four-Olympic championship run in dramatic flourish with a 3-2 shootout win in 2018. Monique Lamoureux-Morando scored to tie the game with 6:21 left in regulation, before her twin sister Jocelyne Lamoureux-Davidson sealed it in the shootout.

Canada, naturally, exacted a sliver of revenge in August by ending the Americans’ five-tournament run of world championship titles on Marie-Philip Poulin’s goal in a 3-2 overtime win.

Now they prepare to gather at Wukesong Sports Centre for what is highly anticipated to be the first of two meetings between the global powers, with a rematch expected in the gold-medal game next week.

Four-time U.S. Olympian Hilary Knight was already deflecting questions about the matchup following a 5-0 win over the Russian team on Saturday night by noting the Americans (2-0) must first place their focus on playing Switzerland the next day.

Canada, which faces the Russians on Monday, followed a 12-1 tournament-opening win over Switzerland with an 11-1 win over Finland.

The specter of the showdown, however, has loomed since the teams opened their pre-Olympic Rivalry Series at Allentown, Pennsylvania, in October.

“Yeah, you know what the best part is?” U.S. captain Kendall Coyne Schofield said following a series-opening 3-1 loss. “We have them eight more times.”

The nine-game series was cut to six games following a COVID-19 breakout hitting the Canadians. Canada finished with a 4-1-1 edge, with four games decided by one goal, including three in overtime.

Canada coach Troy Ryan was cautious in taking anything away from the results.

All Ryan expects is the game to be close.

“Every time I think or hear of Canada against U.S., I think 3-2. So many games end up in 3-2 scores,” he said. “You associate it with one of the best rivalries in all of sport.”

For all the lore associated with Red Sox-Yankees, Lakers-Celtics, Michigan-Ohio State, each rivalry has endured cyclical ups and downs. What separates U.S.-Canada in women’s hockey is how even the two sides have been for so long.

Canada has the Olympic edge with a 5-3 record and winning four golds to America's two. At the world championships, the teams are 15-15 with Canada having won 11 titles to the U.S.'s nine. In all-time meetings dating to 1990, as compiled by Hockey Canada, the Canadians have won 71 games in regulation, 20 in overtime/shootout, lost 53 in regulation and 17 in overtime/shootout, and tied once.

The key is how both teams have pushed each other to be better to the point the two nations essentially dominate every tournament.

“It’s something that we’ve all been a part of that have played on those teams, and it just doesn’t go away,” former Canadian star Jayna Hefford said. “It’s the games you want to play, and it’s the team you think about as you’re training because you want to play against the best. Those are the games you dream of.”

To Granato, beating a lesser opponent by 10 goals is not as enjoyable as compared to entering a game not knowing the outcome.

“The best games were the 2-1 shootouts even if you won or lost,” Granato said. “The reason you play the game is to try and win. You don’t want to know the results before you step on the ice.”

What’s changed over the years is a thawing of off-ice relations, with players on both sides of the border now working together to grow the sport as members of the Professional Women’s Hockey Players’ Association.

“I don't think you'll hear too many stories like that anymore since the players do interact so much more off the ice together,” said Monique Lamoureux-Morando, referring to Granato's elevator story. “Instead of the word hate, I would say passionate.”

And yet, she will never forget her welcome-to-the-rivalry moment during a pre-2010 Olympics exhibition game in Victoria, British Columbia.

“We lost the game. I think it was 3-1 and there were seconds left, when I remember (Canada captain) Hayley Wickenheiser nailed Natalie Darwitz," said Lamoureux-Morando, who has since retired and made her TV broadcasting debut as an NBC hockey analyst this weekend.

"It was offside, and she hit her right after the whistle or during the whistle, depending on who you talk to,” she said. “I was on the ice and mayhem ensued.”