US consumer spending fell 0.2% in December in face of virus 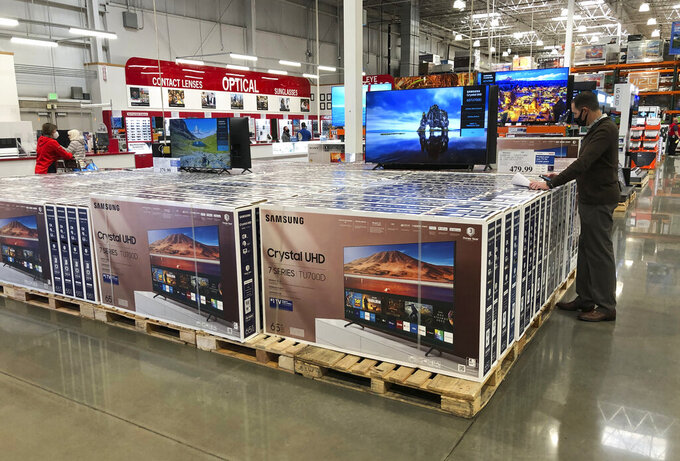 In this Nov. 10, 2020 photo, a shopper stands by a display of Samsung 65-inch televisions in a Costco warehouse in Sheridan, Colo. U.S. consumer confidence posted a gain in January, helped by a rise in expectations about the future. The Conference Board reported Tuesday, Jan. 26, 2021, that its consumer confidence index increased to 89.3, a rebound from December when it had fallen to a reading of 87.1. (AP Photo/David Zalubowski)

WASHINGTON (AP) — U.S. consumers slowed their spending by 0.2% in December, cutting back for a second straight month in a worrisome sign for an economy struggling under the weight of a still out-of-control pandemic.

The decline reported Friday by the Commerce Department followed a seasonally adjusted 0.7% drop in November. It was the latest sign that consumers, whose spending is the primary driver of the U.S. economy, are hunkered down and avoiding traveling, shopping and dining out. Since making a brief bounce-back from the viral pandemic last spring, consumer spending has barely grown. Sales at retailers have declined for three straight months.

Friday's report from the government also showed that personal incomes, which provide the fuel for spending, rose a modest 0.6% after two months of declines. Yet Americans who have been fortunate enough to keep their jobs have been largely stockpiling savings rather than spending. That could bode well for the economy later this year, once consumers feel more willing and are more able to spend.

The latest figures reflect a shaky economy. On Thursday, the government estimated that the economy grew at a 4% annual rate in the final three months of 2020 but shrank last year by the largest amount in 74 years. At the same time, the job market is faltering, with nearly 10 million jobs still lost to the pandemic, which erupted 10 months ago. Hiring has slowed for six straight months, and employers shed jobs in December for the first time since April.

The outlook for 2021 remains uncertain. Economists warn that a sustained recovery won’t likely take hold until vaccines are successfully distributed and administered nationwide and government-enacted rescue aid spreads through the economy, which could take months. In the meantime, millions of individuals and businesses continue to struggle.

Last week, for instance, 847,000 laid-off Americans applied for unemployment benefits, an elevated figure that showed that many companies keep cutting jobs as the pandemic continues to rage. Before the virus erupted in the United States in March, weekly applications for jobless aid had never topped 700,000, even during the Great Recession.

In the coming months, as vaccines become widely distributed and administered, growth is expected to revive. After an initial slowdown in the current quarter, many analysts believe growth will achieve stronger gains for the rest of the year, allowing GDP to expand roughly 5% for 2021 as a whole.

Yet that forecast hinges on the widespread use of vaccines and the gradual reopening of businesses and the rehiring of millions of laid-off workers. The prospect of increased support from Congress’ approval of at least part of President Joe Biden’s $1.9 trillion relief plan and pent-up spending from the savings buildup of higher-income households has also raised hopes. A $900 billion rescue aid package that the government enacted late last year is providing some help, too.

On Wednesday, the Federal Reserve kept its benchmark short-term interest rate near zer o and stressed that it would keep pursuing its low-rate policies until a recovery is well underway. The Fed acknowledged that the economy has faltered in recent months, with hiring weakening especially in industries affected by the raging pandemic, notably restaurants, bars, hotels and others involved in face-to-face public contact.

Friday's government report on consumer spending showed that inflation by a measure preferred by the Fed rose 0.4% in December after no change in October and November. That left prices up 1.3% over the past 12 months, well below the Fed's 2% target.

Most analysts think inflation will creep higher in coming months as the economy recovers. But Fed Chair Jerome Powell has made clear that the central bank sees no signs that inflation may grow undesirably high.

The savings rate remained at an elevated 13.7% of after-tax income in December, up from 12.9% in November. Americans' savings have reached high levels since the pandemic hit nearly a year ago, reflecting business restrictions and the reluctance of many to leave home. Economists estimate that households have accumulated about $1.6 trillion in savings since the onset of the pandemic.

In the final three months of 2020, consumer spending, which accounts for about 70% of the economy, grew at a 2.5% annual rate. Many analysts say that figure should grow as federal aid spreads through the economy.

Gregory Daco, chief U.S. economist at Oxford Economics, said he thinks consumer spending will rise 6.4% for the entire year after having fallen 3.9% in 2020.