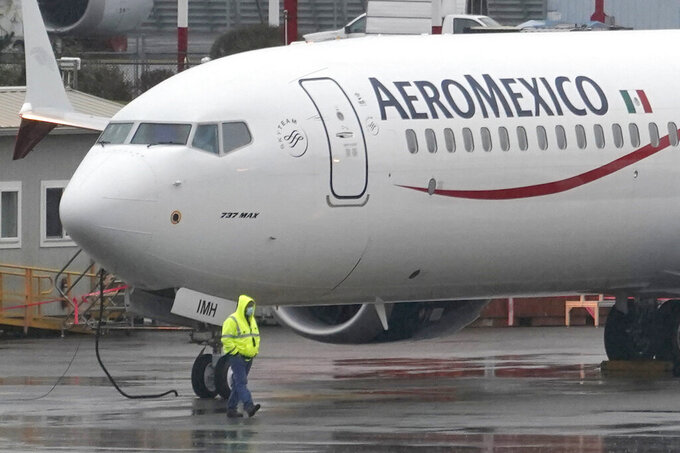 FILE - In this Nov. 18, 2020 file photo, a worker wearing a mask walks past a Boeing 737 Max 9 built for Aeromexico as it is prepared for a flight from Renton Municipal Airport, in Renton, Wash. U.S. regulators have downgraded Mexico's aviation safety rating, Tuesday, May 25, 2021, a move that prevents Mexican airlines from expanding flights to the United States just as travel is recovering from the pandemic. (AP Photo/Ted S. Warren, File)

U.S. regulators have downgraded Mexico's aviation safety rating, a move that prevents Mexican airlines from expanding flights to the United States just as travel is recovering from the pandemic.

The Federal Aviation Administration said Tuesday it downgraded Mexico after finding that the country does not meet standards set by a United Nations aviation group.

The downgrade means that U.S. airlines won't be able to sell tickets on flights operated by Mexican airlines, a setback that will mainly hit Delta Air Lines, which has a partnership with Aeromexico.

Delta said its own service to Mexico is not affected by the downgrade, and it will continue to operate all its flights there normally. Delta might have to issue new tickets, however, to customers who used Delta to book a flight operated by Aeromexico.

Aeromexico said its flights won’t be affected, and it will work with Mexican regulators to reverse the downgrade.

“At Aeromexico, safety is our top priority and because of that we will continue to operate under the highest international standards,” the airline tweeted.

Volaris tweeted that the downgrade was related to factors "outside the control of Mexican airlines.”

Mexico has been by far the most popular international destination for Americans during the pandemic. In the first two months of this year, U.S. citizens took more than 800,000 trips to Mexico, accounting for 42% of all foreign air travel by Americans in that period, according to figures from the U.S. Commerce Department.

Most of those flights are operated by U.S. airlines. Five Mexican carriers are scheduled to operate 6,152 flights — 27% of the total — between the two countries next month, according to data from research firm Cirium.

FAA safety ratings of other countries are designed to measure those countries’ oversight of its airlines but do not mean that the airlines are unsafe. The FAA said it will increase scrutiny of Mexican flights to the United States, but the downgrade does not immediately affect current flights.

The FAA decision to lower Mexico from “Category 1” to “Category 2” puts it in a group of countries that includes Bangladesh, Pakistan and Thailand.

The FAA found that Mexico’s ability to oversee its airlines falls short of standards set by a U.N. group called the International Civil Aviation Organization. Those standards cover a broad range of issues including the regulator’s technical expertise, inspection procedures and record-keeping.

In a statement Tuesday, Mexico’s Communications and Transport Department suggested that low staffing due to the coronavirus pandemic — which cut flights drastically — may have played a role in the FAA decision.

“The (U.S.) review was carried out in October, when the AFAC was operating with one-fourth of its personnel, and amid a significant surge in the COVID-19 pandemic,” the department wrote. “Despite this, the agency acted responsibly to take action on all the observations made by U.S. authorities.”

It was unclear if the low staffing levels were due to employees calling in sick or being furloughed during the pandemic.

But if it was due to cost-cutting measures during the pandemic, it may be the most visible illustration to date of the real costs of President Andrés Manuel López Obrador obsession with cutting government spending.

The department said Mexico would continue to adhere to international safety standards and is committed to recovering its previous Category 1 rating.

Officials at U.S. airlines became aware of the potential downgrade recently, but they held out hope that Mexican authorities and the FAA could resolve their differences. More than a decade ago, the FAA considered downgrading Israel but held back after Israel took steps to reassure the FAA about its oversight of aviation.

___ David Koenig can be reached at www.twitter.com/airlinewriter