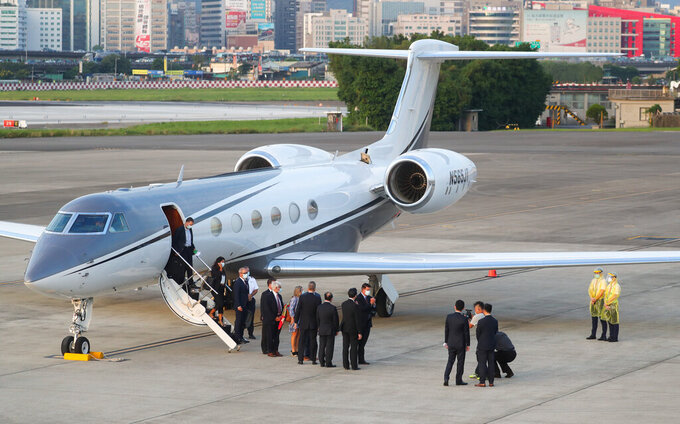 U.S. Under Secretary of State Keith Krach, center, gestures after disembarking from a plane upon arrival at the air force base airport in Taipei, Taiwan on Thursday, Sept. 17, 2020. Krach is in Taiwan on Thursday for the second visit by a high-level American official in two months, prompting a stern warning and threat of possible retaliation from China. (Pool Photo via AP Photo) 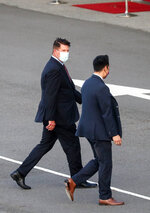 TAIPEI, Taiwan (AP) — U.S. Under Secretary of State Keith Krach arrived in Taiwan on Thursday for the second visit by a high-level American official in two months, prompting a stern warning and threat of possible retaliation from China.

Beijing considers Taiwan its own and opposes all official contacts between other countries and the self-governing island.

Krach arrived at an air force base in Taipei, the capital, for a three-day visit. Wearing a face mask, he bumped elbows in greetings with Taiwanese Deputy Foreign Minister Harry Ho-Jen Tseng.

Krach, the highest-level State Department official to visit the island in decades, is to meet Taiwanese President Tsai Ing-wen and other senior officials, the island's foreign ministry said.

The visit by Krach, who is under secretary for economic growth, energy and the environment, follows a high-profile trip in August by U.S. Health Secretary Alex Azar, the highest-level U.S. Cabinet official to visit since the U.S. switched formal relations from Taiwan to China in 1979.

However, the U.S. has maintained unofficial ties with Taiwan since the official diplomatic break and is the island’s most important ally and provider of defense equipment.

Ahead of Krach's arrival, the U.S. ambassador to the United Nations, Kelly Craft, had lunch Wednesday with Taiwan’s top official in New York, a meeting she called historic and a further step in the Trump administration’s campaign to strengthen relations with Taiwan.

Craft said her lunch with James K.J. Lee, director of the Taipei Economic and Cultural Office in New York, was the first meeting between a top Taiwan official and a U.S. ambassador to the United Nations since 1971, when the China seat at the U.N. was passed from Taipei to Beijing.

In Taiwan, Krach is to attend a banquet hosted by Tsai on Friday and hold discussions on the creation of a new economic and commercial dialogue, according to Taiwan's de facto ambassador in the U.S., Hsiao Bi-khim. He will also attend a memorial service for former President Lee Teng-hui, who led the island's transition to democracy and died at age 97 in July.

Krach’s visit and Craft’s lunch with Lee are certain to exacerbate mounting tensions between Washington and Beijing over the coronavirus pandemic, trade, technology, Hong Kong and the South China Sea.

China condemned the visit on Thursday and warned it could retaliate.

At a daily briefing Thursday, Chinese foreign ministry spokesperson Wang Wenbin said Krach’s visit violates U.S. commitments to China and “bolsters the separatist forces of Taiwan independence and undermines China-U.S. relations and peace and stability across the Taiwan Strait,” adding that Beijing had “lodged solemn complaints” with Washington over the matter.

“We urge the U.S. to fully recognize the high sensitivity of the Taiwan issue ... immediately stop official exchanges and actions of improving substantive relations with Taiwan, and handle Taiwan-related issues cautiously,” Wang said. “China will make necessary responses in accordance with the development of the situation.”