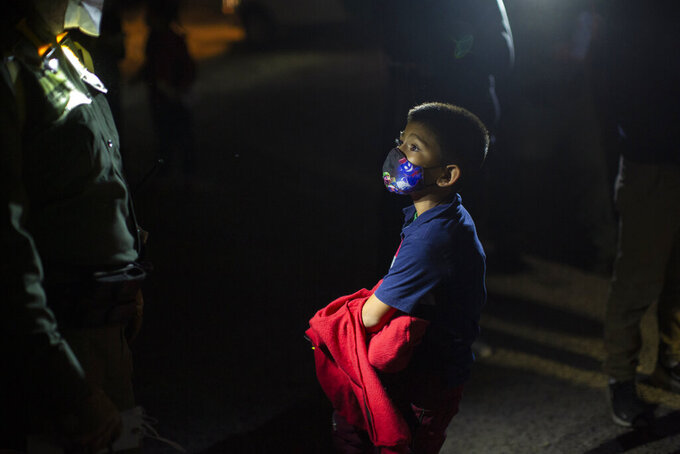 Davidson Jair, 7, answers questions from a U.S. Border Patrol agent at an intake site after he was smuggled on an inflatable raft across the Rio Grande river in Roma, Texas, Wednesday, March 24, 2021. Davidson traveled from El Salvador in the hope of reaching relatives living in the U.S. The Biden administration says that it's working to address the increase in migrants coming to the border. On Wednesday, President Joe Biden tapped Vice President Kamala Harris to lead the White House efforts at the U.S. southern border and work with Central American nations to address root causes of the migration. (AP Photo/Dario Lopez-Mills)

SAN SALVADOR, El Salvador (AP) — A U.S. envoy arrived in El Salvador on Wednesday for talks on immigration amid a surge of child migrants on the U.S. border.

The U.S. delegation was led by Ricardo Zúñiga, the newly named special envoy for the Northern Triangle nations, which include Guatemala, Honduras and El Salvador. The three countries have been the largest source of migrants arriving at the U.S. southern border in recent years.

Migrants continue to stream out of the three, which are plagued by endemic corruption and violence and more recently devastated by two major hurricanes in November and the economic impact of the COVID-19 pandemic.

Zúñiga is scheduled to meet with President Nayib Bukele. El Salvadoran officials said they were ready to cooperate, but that more development aid was needed to prevent families with children from migrating.

“We are very willing to work with any initiative that aims to help”, said Carolina Recinos, coordinator of Bukele’s Cabinet.

César Ríos, director of the non-governmental Salvadoran Migrant Institute, said: “We need to create opportunities in the communities these kids are leaving, greater social aid to improve the lives of these children’s families.”

“We are willing to join forces in the fight against human trafficking and to protect human rights, especially of children," said López Obrador.

Mexico has reduced the number of migrant families with children it will accept, in part because of a lack of facilities to shelter large numbers.

López Obrador's office said in a statement he and Harris discussed “cooperation projects for southern Mexico and the countries of northern Central America ... to promote egalitarian economic development in the region.”

“Both leaders agreed on the urgency of carrying out emergency humanitarian aid programs in Guatemala, Honduras and El Salvador. Similarly, they reaffirmed the commitment to protect migrants’ human rights, with emphasis on appropriate protection for unaccompanied minors.”