US health chief to visit Taiwan, a COVID-19 success story 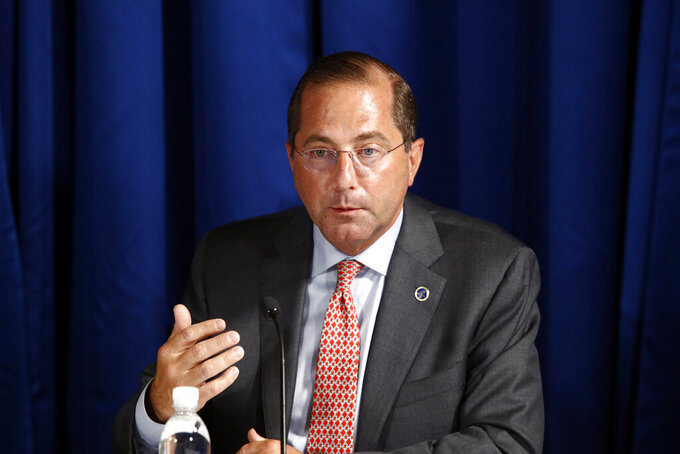 FILE - In this July 31, 2020, file photo, Health and Human Services Secretary Alex Azar speaks during a roundtable discussion with President Donald Trump on the coronavirus outbreak and storm preparedness at Pelican Golf Club in Belleair, Fla. When Azar arrives in Taiwan he’ll find a society that has managed to contain COVID-19 by doing things the U.S. has fumbled, such as having a national plan and citizens willing to wear masks. (AP Photo/Patrick Semansky, File)

WASHINGTON (AP) — U.S. Health Secretary Alex Azar said Friday he wants to learn about Taiwan's “incredibly effective” response to the cornavirus even though the island did things that the U.S. has fumbled, such as having a unified strategy and citizens willing to war masks.

Azar leads a U.S. delegation departing this weekend for a three-day visit to Taiwan, where they will meet with President Tsai Ing-wen and health system leaders, and Azar will give a speech to public health graduates. The trip is a geopolitical chess move in the Trump administration's contentious relationship with China, which considers Taiwan part of its national territory and has already registered its displeasure.

“The message of this trip is about Taiwan,” Azar said in an interview, deflecting a question about China. “It's about public health, it's about our partnership with Taiwan, but also the model that Taiwan offers to the world community of a transparent and open health care system. It is a model others can learn from.”

He called Taiwan's coronavirus response “incredibly effective” and said he's willing to “learn from them about their responses.”

“It will be good if our health chief can learn from Taiwan, how exactly they did it,” said Cheng. “It's really a treasure trove of very useful information as to how you could effectively control and contain the spread of the virus.”

Taiwan had direct experience with an earlier respiratory virus known as SARS, so it did not take the new coronavirus lightly. A government-run health care system — broadly similar to what Sen. Bernie Sanders advocates — allowed public health authorities to mobilize resources to track and contain cases. Citizens were willing to follow public health advice.

As a result Taiwan has had fewer than 500 confirmed cases of COVID-19, despite its close proximity to China, where the virus originated. Florida, which has roughly the same number of residents as Taiwan, has had more than 500,000 cases and is struggling to contain this summer's surge.

Taiwan “set the policy right and they had the infrastructure and the leadership,” said Cheng. “I cannot emphasize enough the importance of leadership.”

In the U.S., President Donald Trump minimized the potential impact of the coronavirus at the outset, and has continued to do so from time to time. The federal government deferred to the states on key issues such as testing, even as public health experts and Democrats in Congress have called for a national plan.

Azar, while praising Taiwan, said the U.S. is dealing with “very different” circumstances.

“They are an island with 23 million people that also experienced SARS quite directly,”he said. The U.S. is one of the world's largest land mass countries, he added, with a federal system that gives states great leeway, and traditions of individual liberty.

Like other administration officials, Azar says Trump acted quickly to try to contain the virus by imposing restrictions on travel from China, and he points to the government's drive to facilitate development and eventual distribution vaccines as direct evidence of the U.S. president's commitment.

Also on the agenda for the trip is trade as the U.S. tries to broaden its sources for medical products, many of which have been produced in China.

American Cabinet-rank officials have traveled to Taiwan in previous administrations, but Azar's trip is billed as the highest-level visit since Washington and Taipei broke formal diplomatic relations in 1979 as a consequence of U.S. rapprochement with China. The U.S. is represented in Taiwan by an institute that acts as an embassy in all but name.

Members of the U.S. delegation will wear masks and observe social distancing precautions. They'll be tested for the coronavirus before they depart, once they land in Taiwan, and before they return.