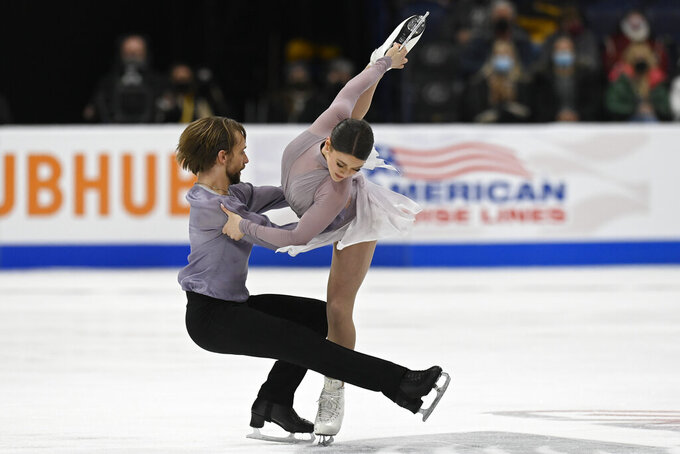 FILE - Kaitlin Hawayek and Jean-Luc Baker compete in the ice dance program during the U.S. Figure Skating Championships Saturday, Jan. 8, 2022, in Nashville, Tenn. U.S. figure skaters who win national championships get their names inscribed on a plaque and trophy. It's something they relish. It's also something special to peruse the names already there — particularly for ice dancers.(AP Photo/Mark Zaleski, File)

U.S. figure skaters who win national championships get their names inscribed on a plaque and trophy. It's something they relish.

It's also something special to peruse the names already there — particularly for ice dancers.

For decades, ice dance was the stepchild of U.S. figure skating. While men and women were reaching the top levels of the individual events and even pairs skaters were looked at highly, there wasn't much success for the dancers. From Colleen O’Connor and James Millns winning bronze at the 1976 Olympics through 2002, no Americans earned medals.

In this century, however, it has become the most consistent of disciplines for Americans. Tanith Belbin and Ben Agosto took silver in 2006, Meryl Davis and Charlie White followed with silver in 2010, gold in 2014. Four years ago, Maia and Alex Shibutani grabbed bronze.

Every year but two since 2005, Americans have made the podium at the world championships, including two gold medals for Davis and White.

The current U.S. representatives at the Olympics recognize — and revere — those couples and their accomplishments.

“I think it is really interesting looking and seeing Naomi (Lang) and Peter (Tchernyshev) with four, then Tanith and Ben with five, then Meryl and Charlie with six. As a competitor, you think, 'Oh, maximum I could have four,'" says Madison Hubbell, a three-time national champ and three-time world medalist with partner Zach Donohue. “I think Meryl and Charlie, kind of for me that was who I was growing up with and they were setting the bar, and everybody wanted to be them, wanted to catch them, wanted the excellence they were able to put out there every time.”

Even more impacted by Davis-White and Belbin-Agosto, all of whom had skated for the Detroit Skating Club, was Evan Bates. He is headed to his fourth Games, his third with Madison Chock, the current national champions.

“I feel like this generation of skaters has grown up with Tanith and Ben, Meryl and Charlie," says Bates, "and I am incredibly proud to be a U.S. ice dancer. And it makes the U.S. championships in this discipline I think extremely significant as a competition. It is not easy to win a U.S. championship and to get your name on that cool trophy with the blades.

“And personally, now going to the Olympics again and having the opportunity (previously) to be on a team with Tanith and Ben, be on a team with Meryl and Charlie, and have role models in the sport. And growing up in Michigan, and just from basically the early years of my career having those people around me, to have learned and studied under them kind of in a way, had a huge impact on me. I am incredibly proud to be alongside those who came before us.”

Those words from the current crop of U.S. Olympic ice dancers — Kaitlin Hawayek and Jean-Luc Baker are the third duo — make the folks they idolize almost blush. That's not particularly a sensation Davis and White experienced on the ice, where they were masterful technicians, enjoyable entertainers and perennial champions.

“I always believed that if you aim high enough, commit deeply enough and work hard enough, anything is possible,” Davis says. "In terms of a legacy, I just hope that the few people who really know and love us will remember us as good people. On the ice and off, I think that’s the most anyone can hope for.

“It’s pretty special to see U.S. ice dance continuing to soar. From those top three U.S. teams headed to Beijing, all the way to some extraordinary young teams who made their nationals debut in 2022, there’s a clear commitment to excellence throughout. Though it’s been a number of years since Charlie and I have been on competitive ice, I very much still feel a part of the community. I’m proud to see former teammates and forever friends making their dreams come true.”

Those dreams naturally include shooting for gold in Beijing. That's a difficult assignment because Gabriella Papadakis and Guillaume Cizeron of France, who train in Montreal with the top three U.S. couples, won silver four years ago and are strong favorites. Other chief contenders for the podium are Victoria Sinitsina and Nikita Katsalapov of Russia, and Piper Gilles and Paul Poirier of Canada.

But, as one longtime figure skating coach often says, with a chuckle: “Ice is slippery.”

At least two of the American duos — Chock and Bates, and Hubbell and Donohue — almost certainly will participate in the team event, where the United States has won bronze the last two Olympics and could reach silver this year; Russia is a prohibitive favorite for gold.

“There are so many teams capable of landing on the Olympic podium. It’s going to be a thrilling event,” says Belbin, who does commentary for NBC and is married to White. “What’s incredible to me is that they all have such different strengths and styles. When it comes to the final free dance event, each one is going to be able to present a unique and equally convincing argument for why they should win an Olympic medal.”

If they do, they owe plenty of credit to their predecessors such as Belbin and Agosto, whose breakthrough inspired those who followed.

“I’m incredibly proud of the entire U.S. ice dance program: past, present, and future,” Belbin notes. “Every generation has built on the legacy of the last, with athletes still continuing to find their own unique paths through the sport.”