US imposes new sanction on Beijing over South China Sea 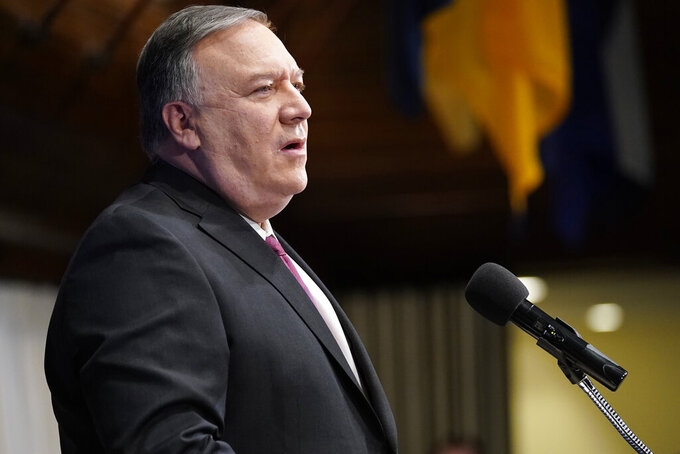 WASHINGTON (AP) — The Trump administration on Thursday imposed new sanctions on Chinese officials over Beijing's increasing assertiveness in the South China Sea. The penalties are yet another Trump administration move that may make President-elect Joe Biden's diplomacy with China more difficult when he takes office next week.

In its waning days, the Trump administration put in place travel bans on an unspecified number of Chinese officials and their families for what it said were violations of international standards regarding the freedom of navigation in those waters. The administration also said it was adding China's state oil company, the China National Offshore Oil Corporation, to a list of companies with which U.S. citizens are banned from doing business.

Secretary of State Mike Pompeo announced the sanctions less than a week Inauguration Day, next Wednesday, in what is the latest in a series of last-minute U.S. moves against China.

“The United States stands with Southeast Asian claimant states seeking to defend their sovereign rights and interests, consistent with international law,” Pompeo said. “We will continue to act until we see Beijing cease its coercive behavior in the South China Sea.”

Since the fall of 2019, the administration has steadily pressured China over human rights issues in Tibet, Hong Kong and the western region of Xinjiang, as well as over trade, Taiwan and the Chinese response to the coronavirus pandemic. On Wednesday, the administration banned the import to the U.S. of some agricultural goods, provoking an angry response from Beijing.

Thursday's move affects Chinese officials and others involved in South China Sea activities. The announcement did not specific which officials would be targeted but many may be covered under previous actions,

In July, Pompeo announced that the U.S. would reject virtually all of China's maritime claims in the South China Sea, which are disputed by most of China's smaller neighbors.