US jobless tally: 3 of 10 Nevada workers idle since closures 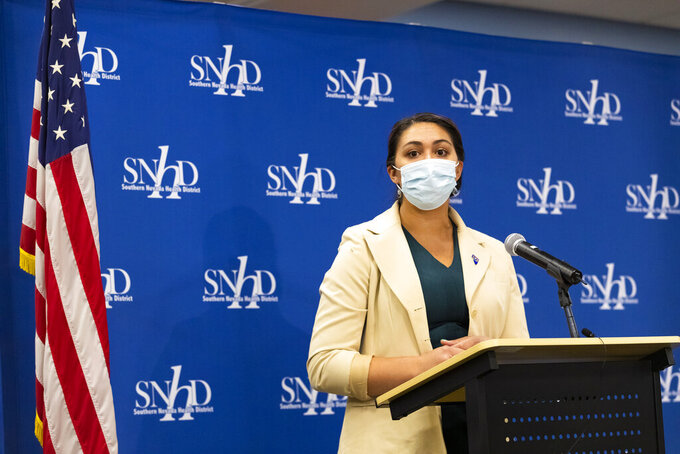 Clark County Assemblywoman Selena Torres speaks at a news conference about how COVID-19 is impacting the Latinos, at the Southern Nevada Health District Office in Las Vegas on Wednesday, May 13, 2020. (Wade Vandervort/Las Vegas Sun via AP)

LAS VEGAS (AP) — About 24,000 out-of-work Nevada residents filed first-time unemployment claims last week, pushing the total of new claims filed since mid-March to almost 443,000 — or more than three of 10 people in the state workforce in February.

Filings have slowed dramatically since a peak of more than 92,000 the week after closures began eight weeks ago, a U.S. Department of Labor report shows.

The state unemployment rate shot up from an all-time-low 3.6% in February to a record 22% last week, and another jump is expected with a state Department of Employment, Training and Rehabilitation report on Friday.

Nevada officials announced Thursday that self-employed workers, gig workers, contract workers and others not typically eligible for unemployment insurance would soon be able to file for coronavirus relief payments.

Heather Korbulic, director of the Nevada Division of Employment, Training and Rehabilitation, said a long-awaited state website would be up and running on Saturday where people can file claims for pandemic unemployment assistance. The assistance is part of a sweeping federal aid package passed by Congress, but Nevada was among the last states to get the system working.

Korbulic said payments are expected to start going out May 23 and will be backdated to the earliest date applicants were unable to work or unemployed.

Two Reno women filed a lawsuit this week to force the state to begin processing and paying the benefits. State officials warned last month that they were working on setting up the new system and didn't expect it to be running until mid-May.

State health officials are reporting almost 6,500 people in Nevada have tested positive for COVID-19, and at least 331 have died.

Most people with the virus experience symptoms such as fever and cough for up to three weeks. Older adults and people with existing health problems can face severe illness, including pneumonia and death. The vast majority recover.

—The Nevada Board of Examiners, comprised of Gov. Steve Sisolak, Attorney General Aaron Ford and Secretary of State Barbara Cegavske, voted Thursday to recommend that state lawmakers use all $401 million stashed in a rainy day fund to plug what's expected to be major holes in the state budget. Lawmakers on the interim budget committee are expected to take up the issue in a Monday meeting.

— The largest annual Fourth of July fireworks display at Lake Tahoe has been cancelled, joining all the others around the lake who scrubbed their events earlier because of COVID-19. The Tahoe Douglas Visitors Authority voted unanimously to cancel the event at South Lake Tahoe, California. The celebration bordering the main casino drag in Stateline typically attracts tens of thousands. of people. Officials earlier cancelled fireworks on the north shore at Incline Village and in California at Kings Beach and Truckee.