U.S. news organizations focus on lives lost in the pandemic 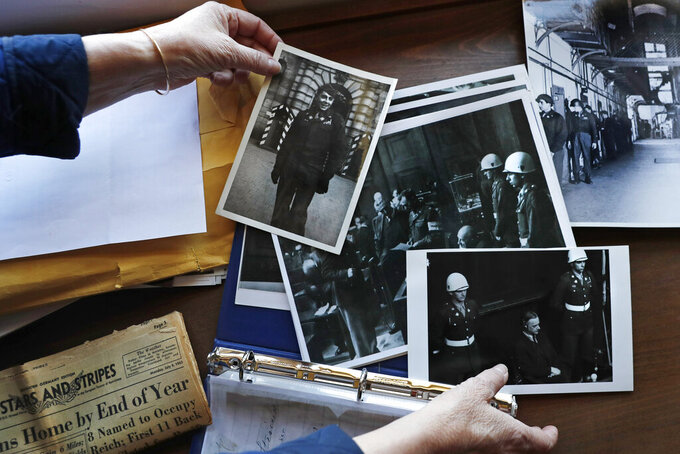 FILE - In this May 13, 2020 file photo, Emily DiPalma Aho looks over photographs and memorabilia of her father, Emilio DiPalma, a World War II veteran, at her home in Jaffrey, N.H. Emilio, who as a 19-year-old U.S. Army infantryman stood guard at the Nuremberg Nazi war crimes trials, died last month at the age of 93 after contracting the coronavirus at Holyoke Soldiers' Home in Massachusetts. The passage of a milestone — 100,000 lives lost due to the coronavirus in the United States — has brought attention to how news organizations are trying to tell the stories behind the numbers. (AP Photo/Charles Krupa, File)

Most of the pandemic's victims aren't known beyond family, friends and neighbors: Tomas Lopez, who sold tacos from a truck in Seattle; Long Island supermarket worker Gladys Cortes; realtor Bob Barnum of St. Petersburg, Florida; Mary Louise Brown Morgan of New Orleans, who exercised with her friends in the “Silver Slippers” three times a week.

The milestone recently reached was a number simple to emblazon in newspaper, website and television headlines — 100,000 people in the United States dead from the new coronavirus.

Yet since the pandemic started, the nation's obituary writers have tried to tell the world about Lopez, Morgan and thousands like them, to make clear there's a life behind every number.

“I think people are interested — I know I am — in the lives of people who are not public figures who are dying from this,” said Mo Rocca of CBS News, who did two pre-coronavirus seasons of his “Mobituaries” podcast exploring lives lost.

He's been too busy with his day job on “CBS Sunday Morning” to get started on a third season, but when he does, he expects to explore that interest.

“There's this cliche about somebody being ‘taken from us,’ and I don't think it's a cliche in this case because it does feel like these lives have been taken from us," Rocca said.

Adam Bernstein, who oversees obituaries at The Washington Post, said the workload has easily doubled since the virus began and that the significance of obituaries right now is measured not just by the loss of victims but the way so many of us have been forced to live.

“Obituaries are essentially stories that allow us to make human connections with strangers,” he said. “We’re all stuck at home, yearning for human connection we really haven’t had for a long time, and obituaries provide that kind of contact.”

In a typical month, The New York Times runs about 80 to 85 obituaries. In April, the paper wrote 185, said Bill McDonald, the newspaper's obituaries editor.

That doesn't even count some that were written but didn't run, like the obit that was quickly prepared for British Prime Minister Boris Johnson when he was critically ill with COVID-19. Just in case.

The Times was well-prepared to deal with the lives of the famous and accomplished. But at the pandemic's outset, editors were determined to chronicle a cross-section of people who died. The model was the Times' “Portraits of Grief” about victims of the Sept. 11, 2001 attack on the World Trade Center, only this time the paper wanted to do more than vignettes and knew the job was open-ended, McDonald said. The Times' obit department brought in people from other parts of the operation who had seen their workload decrease because of the lockdown.

The result is the paper's “Those We've Lost” section that profiles lesser-known victims.

“We were interested in putting faces behind the numbers, which are so numbing,” McDonald said.

The same theory was behind the arresting cover of the Times' edition on Sunday, May 24, which named 1,000 victims and briefly summarized what made them unique.

Scale was also an issue at The Associated Press, the idea of telling a sprawling story in ways that people could relate to.

“We decided to focus on families and what the impact was on individuals," said Peter Prengaman, the AP's news director for the western United States. With Raghu Vadarevu, a global news editor, they created the “Lives Lost” feature that draws on the AP's worldwide reach and staff to tell these stories and show differences in how victims are mourned.

The handful of profiles produced each week have the same attention to detail as stories about famous people that are an obit writer's usual focus.

Far from being depressing, Prengaman said that “it's a really rewarding thing to work on, to edit. It really teaches you the value of people's lives.”

The Washington Post, the Los Angeles Times and the Chicago Sun-Times are among those who have established special sections for those who have died from the coronavirus. They can't cover everyone, however, and many newspapers are seeing a corresponding boom in paid death notices.

“It’s the one area, sadly, of advertising that’s booming,” says Los Angeles Times obituaries editor Steve Marble. “On Sundays, there’s page after pages of notices, much more so than in the past.”

Last week NPR began a new series that features friends and family members of frontline workers who died, talking about their loved one.

Paul Saltzman, the Sun-Times’ Sunday editor, says that the goal of obituary coverage remains the “most meaningful and most interesting stories.” Interest from readers is strong, and responses can be highly personal.

“People generally are pleased that we’re telling the world about their loved ones who’ve died,” he said, citing the family of Emilia Pontarelli, a 93-year-old grandmother known on the northwest side of Chicago as the matriarch of the family behind Tony's Italian Deli.

One time the children of another couple who died hours apart from COVID-19 were worried that there might be a stigma attached to their parents dying this way, Saltzman said.

“We wrote that because they were well known in the town where they lived, the word already had gotten around about what they died from, and it was just a very sad story to have two people in a family go so suddenly," he said.

Rocca said that the current crisis might mark a resurgence in interest about obituaries and finding out about people's lives.

“It sounds a little insipid to say we're valuing life more,” he said. “But maybe we are.”