US officials postpone visit to Guatemala because of volcano 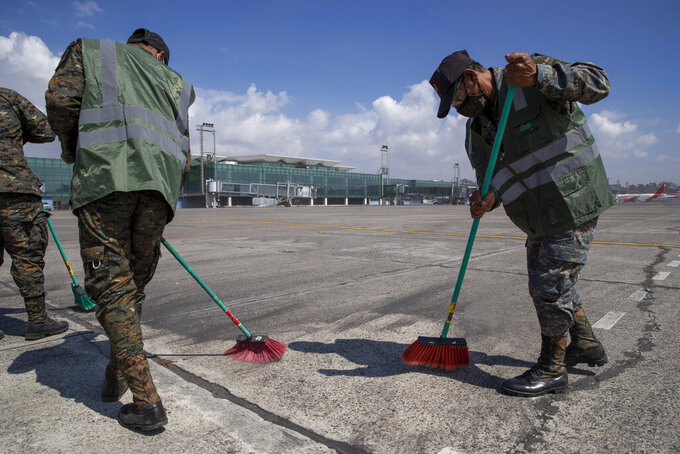 Soldiers sweep volcanic ash from the runway at La Aurora International airport, which has been closed due to an eruption at the Pacaya volcano in Guatemala City, Tuesday, March 23, 2021. (AP Photo/Moises Castillo)

MEXICO CITY (AP) — A planned meeting between U.S. and Guatemalan officials Wednesday was postponed because a volcano's eruption prevented the American delegation from flying in.

The talks with Guatemalan officials and civic groups had been expected to focus on the surge of migrants reaching the U.S. border.

Ash falling from the Pacaya volcano near Guatemala City has forced the closure of the international airport, and the U.S. Embassy said the talks had to be postponed because of flight cancellations.

The U.S. delegation had been scheduled to include Juan González, the National Security Council’s senior director for the Western Hemisphere, and Ricardo Zúñiga, the newly named special envoy for the Northern Triangle nations — Guatemala, Honduras and El Salvador.

The three countries have been the largest source of migrants arriving at the U.S. southern border in recent years. Migrants continue to stream out of the three, which are plagued by endemic corruption and violence and more recently devastated by two major hurricanes in November and the economic impact of the COVID-19 pandemic.

The airport was closed Tuesday, and authorities did not say how long the closure would last. Volcanic ash is highly abrasive and can damage airplane engines and other mechanical devices.

Pacaya had an explosive blast in 2010 that killed a reporter and two local people.