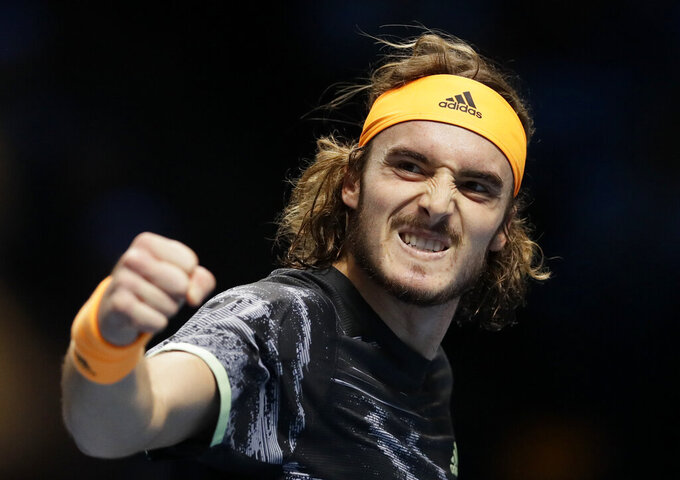 FILE - In this Nov. 11, 2019, file photo, Stefanos Tsitsipas of Greece celebrates winning a point against Daniil Medvedev of Russia during their ATP World Tour Finals singles tennis match at the O2 Arena in London. Tsitsipas is scheduled to play in the U.S. Open, scheduled for Aug. 31-Sept. 13, 2020.(AP Photo/Kirsty Wigglesworth, File)

Men to watch at the U.S. Open in New York, where play is scheduled to begin Monday:

Matchup to Watch For: Could play big-serving John Isner in fourth round.

Words: “Right now it’s not something I’m thinking about. It’s not my goal, actually, to go unbeaten, but I wouldn’t complain if I do.” — Djokovic on the prospect of not losing a match in 2020.

Aces: 0-3 in Grand Slam finals so far, with two losses to Rafael Nadal at the French Open and one to Novak Djokovic at this year’s Australian Open. ... Played 28 exhibition matches while sanctioned tennis was shut down because of the pandemic. ... His physical baseline game can wear down many opponents.

Matchup to Watch For: Could play 2014 U.S. Open champion Marin Cilic in the third round.

Words: “I stayed home before for two months and that was enough, I guess, and I was ready to compete again, ready to travel again.” — Thiem, on his full exhibition schedule.

Aces: Reached the finals at six consecutive hard-court tournaments a year ago, including a five-set loss to Rafael Nadal at Flushing Meadows. ... His versatile game and in-match adjustments make things tough for any opponent.

Matchup to Watch For: Could play Grigor Dimitrov or Frances Tiafoe — two players who each tested positive for the coronavirus — in the fourth round.

Words: “I’m quite happy with my level of tennis. I honestly thought it would be worse, so that’s the good part.” — Medvedev on returning to competition after so many months away because of the pandemic.

Aces: With great hands and a free-flowing game, seems poised for a long run at the top of tennis. ... Ranks just 62nd on tour over the past 52 weeks in percentage of return games won at 35.9%.

Matchup to Watch For: Could play Alexander Zverev in a quarterfinal between two younger players people have pegged as future Grand Slam champs.

Words: “It is great to be back on court, even without fans. I still feel the joy and the happiness of me being able to play.” — Tsitsipas.

Aces: Averaging 6 double-faults per match over the past 12 months; only two players are hitting more over that span. ... If he can figure out that weakness, could do big things, because the rest of his game is solid. ... Made career-best Grand Slam run in January at the Australian Open, erasing some questions about his performances on the sport's most important stages.

Matchup to Watch For: Plays two-time Grand Slam runner-up Kevin Anderson in the first round.

Words: “He moves well for a big guy, solid off the ground. ... When he’s serving well, he’s obviously one of the top players in the world.” — Andy Murray on Zverev.

Aces: Still working his way back from two hip operations, one in January 2018, the next in January 2019, that he thought would force him to retire. ... Missed two of the last three U.S. Opens, a tournament he won eight years ago for his first Grand Slam title. ... Showed in two match wins at Western & Southern Open that he can move fairly well and certainly still thinks his way through a match as well as anyone.

Matchup to Watch For: Plays 48th-ranked Yoshihito Nishioka of Japan in the first round, a tough opening assignment.

Words: “I know the tennis will come, but it’s also not going to come back immediately. So yeah, it’s just not to expect, like, straight off the bat, to be playing perfect.” — Murray about himself.