US Open returns to Torrey Pines and to prime time 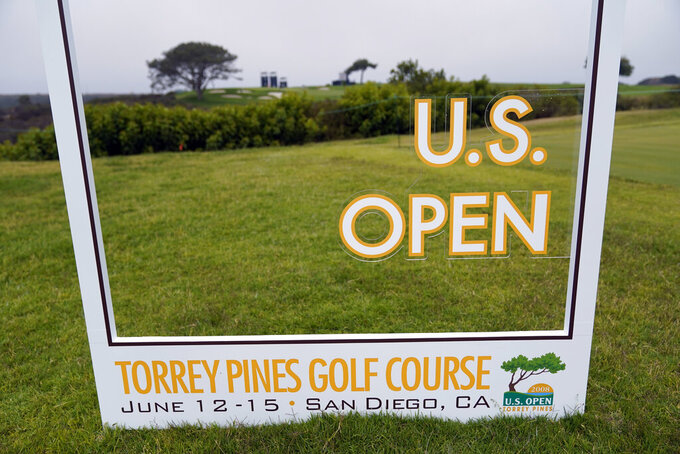 A sign sits along the 16th hole during a practice round of the U.S. Open Golf Championship Monday, June 14, 2021, at Torrey Pines Golf Course in San Diego. (AP Photo/Gregory Bull)

Notes: This is the third time in seven years the U.S. Open has been held at an affordable public golf course. ... Bryson DeChambeau will try to join Brooks Koepka (2017-18) and Curtis Strange (1988-89) as the only back-to-back U.S. Open champions in the last 50 years. ... Americans have won the U.S. Open the last six times. ... Phil Mickelson, coming off his PGA Championship victory at age 50, will try to complete the career Grand Slam with a victory. He holds the U.S. Open record with six runner-up finishes. ... This is the final event before the world ranking determines the 60-player field for the Olympics. ... Patrick Reed won at Torrey Pines in the Farmers Insurance Open in January. Tiger Woods (twice), Jack Nicklaus and Ben Hogan are the only players to win a U.S. Open and a PGA Tour event at the same course in the same year. ... Only 14 players in the field competed at the U.S. Open in 2008 at Torrey Pines.

Next year: The Country Club in Brookline, Massachusetts.

Notes: Brooke Henderson has won two of the last three times in the tournament. ... Matilda Castren is the first player from Finland to win on the LPGA Tour. ... The LPGA Tour has 13 different winners in its first 13 tournaments. They come from eight countries, with the United States leading the way with four titles. ... Henderson leads the LPGA Tour in greens in regulation at a 78% clip. ... The tournament was canceled last year because of the COVID-19 pandemic. ... Jin Young Ko, the No. 1 player in women's golf, leads a field that features five of the top seven in the women's world ranking. ... Lexi Thompson is playing for the third straight week. She won the Meijer LPGA Classic in 2015. ... The LPGA Tour gets its third major of the year next week at Atlanta Athletic Club for the Women's PGA Championship.

Next week: Live and Work in Maine Open.